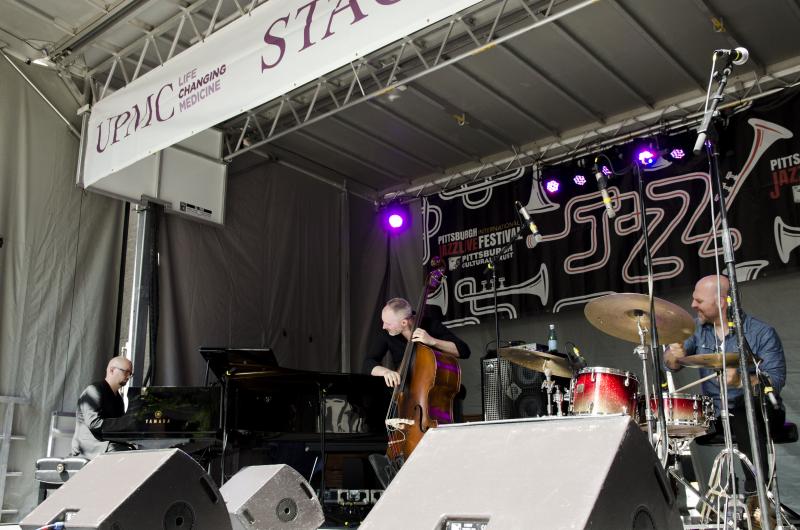 The complicated logistics and sizable costs associated with free jazz festivals have made them somewhat rarified these days. By its all-encompassing scope and scale, the Detroit Jazz Festival has served as a model for many decades now. But if you want something a bit earthier and intimate, there's really no equal for the atmosphere that envelops the Pittsburgh JazzLive International Festival. Now in its seventh year, this budding diamond in the rough gets its energy from the community that serves as its site location. Set on three stages along Penn Avenue, known as the city's cultural district, this festival maintains an intimate vibe despite the large crowds that tend to build over the course of each day. It is not unlikely to find artists and fans chatting on the streets before and after the shows and unlike Detroit, the performances do not overlap so that it is quite easy to rotate among the stages so that one never misses a downbeat.

This year's festivities got underway early Friday evening with a VIP party prior to a performance at the August Wilson Center featuring the David Sanborn Electric Band. This top-rate venue features an intimate 472-seat auditorium which presented Sanborn with a capable quintet that most notably featured drummer Billy Kilson. Stevie Wonder's "Another Star" was sagacious opening gambit that introduced the synergy that Sanborn has developed with this ensemble. One of the iconic numbers from the 1986 set Double Vision led by Sanborn and Bob James, "Maputo" presented a blistering keyboard solo from the ubiquitous David Garfield. On "Spanish Joint," the saxophonist traded licks with guitarist Nicky Moroch. "Run for Cover" allowed bassist Andre Berry to strut his stuff as he literally worked his way up and down the aisles for a pyrotechnic display of chops. All in all, Sanborn's set was a portentous emblem of what was in store the remainder of the weekend.

Heading outdoors for the remainder of the weekend, Saturday's temperature heated up literally and figuratively with a set by Odean Pope and his sax choir. First formed some forty years ago, this ensemble features a rhythm section and five saxophones, making the most of Pope's colorful scoring. One of the set highlights, the original "Coltrane's Time" was distinguished by a repeating riff that launched the solo sections. Pope's own statement was marked by his skillful use of circular breathing and Louis Taylor's alto sound, which was all fire and brimstone. Based on "Giant Steps," "Heavenly" furthered the avant-garde inclinations with its up tempo swing, only to be balanced by a gorgeous ballad dedicated to Pope's late wife which was entitled "Sis."

Since winning the 2015 Thelonious Monk Institute's International Jazz Competition, vocalist Jazzmeia Horn has been turning heads with a stylistic sound that combines the eccentricities of Betty Carter with the range and depth of the great Cassandra Wilson. When she let loose with her scat improvisations on Carter's "Tight" however, there was no doubt that her muse is uniquely her own. With spot-on intonation and high register flourishes, Horn saluted Juneteenth with an earthy rendition of "The African National Anthem." Even more telling was the way she delivered un update to Bobby Timmons' "Moanin,'" made all the more remarkable by the buoyant underpinning of bassist Barry Stephenson and the closely responsive drumming of the up-and-coming Jerome Jennings.

A Pittsburgh favorite who returned to the festival for the first time in several years, trumpeter Sean Jones was in peak form presenting his quartet with piano great Orrin Evans, bassist Ben Williams and drummer Mark Whitfield, Jr. An upbeat "Prof" kicked things into gear and was one of many pieces performed that would come from Jones' new album Live from Jazz at the Bistro. "Lost, Then Found" settled into a mellow groove where Jones' mellifluous lines meshed beautifully with the intuitive comping of Evans on piano. "Nomo" and "The Ungentrified Blues" provided more combustible trumpet displays where Jones truly told a story, complete with all the peaks and valleys. At one point, Jones quoted a Lee Morgan riff ripped from an Art Blakey recording where the drummer goaded the youngster to "get mad!"

A true pioneer when it comes to the concept of crossover artist, vibraphonist Roy Ayers is still doing his thing and an overflow crowd hung on his every move during Saturday evening's concluding performance. Never even introducing his bandmates, Ayers kept the groove going over the course of such mainstays as "Searchin,'" "Red, Black, and Green" and "Everybody Loves the Sunshine." Even though his career quickly moved far left of center stylistically compared to his roots in mainstream jazz, he told this reviewer after his set that the Los Angeles scene of the late '60 was "beautiful." "You know, they are just about all gone," Ayers also quipped about his legendary colleagues. Nonetheless, he seemed inspired by today's current generation of vibists. "It's wonderful to see these guys, some whom I don't even know, caring on the lead of the great Bobby Hutcherson."

Due to unforeseen circumstances, Linda May Han Oh got her early Sunday set started late, which led to some overlap with a performance by Chico Freeman and a band he entitled his Plus + Tet. While Oh and her group featuring tenor saxophonist Ben Wendel seemed to meander at times due to the many devices and artistic angles that Oh tried to tap, Freeman paced a nearly perfect set marked by exquisite writing and a top-shelf supporting unit. "Crossing the Sudan" was a programmatic ride on a camel that morphed into "Freedman," a stunning feature for the drums of Nasheet Waits. The gospel tinge of "To Hear a Teardrop in the Rain" had pianist Anthony Wonsey digging deep for a masterful display of chops and soul. As a tip of the hat to Pittsburgh's own Stanley Turrentine, Freeman's take on "Soft Pedal Blues" spoke to his significance as a talent who has been too long deserving of wider recognition. Vibraphonist Warren Wolf tipped his hat to the great Bobby Hutcherson on the fiery "African Village," a reasonable conclusion to what was one of the best performances of the festival.

Darlings of both mainstream jazzers and trendier youngsters, The Bad Plus took a mid-afternoon slot and seemed to attract quite a crowd despite the insipid heat and encroaching humidity. Reid Anderson, Ethan Iverson, and Dave King may like to play it clever with their covers of everything from Radiohead to Cindy Lauper, but the proof is in the pudding and each musician has the chops and the wherewithal to make the most out of whatever the structure might be. This was clearly evident on a gorgeous reading of Lauper's "Time After Time." Directly following this set, saxophonist Tia Fuller definitely threw down the gauntlet with a fiery performance that also shone light on how much growth she has made in the development of her own voice.

By five o'clock, the heavens opened up and the rain came in sheets before subsiding to intermittent periods of light showers, which would linger the rest of the evening. Nonetheless, the rain deterred few folks and an impromptu dance area was put into play for a spicy set by Spanish Harlem Orchestra. Paced and expertly led by pianist Oscar Hernandez, the group pushed all the right buttons with a fine mix of Latin styles that prominently featured vocalists Marco Bermudez, Jeremy Bosch, and Carlos Cascante. Even under umbrellas, spirits were high for this rousing set.

Coined as an "uber group" when introduced by festival director Janis Burley Wilson, Hudson casually let their soundcheck bleed into their main statement, the anticipation high for this early appearance in support of the group's newly-released album. Of course, keyboard man John Medeski and guitarist John Scofield go way back. Consider too that about a decade ago drummer Jack DeJohnette and Scofield had teamed up with Larry Goldings for their Trio Beyond Project. Add in bassist Larry Grenadier and the seeds of cross fertilization help make this particular incarnation logical and highly musical. Among the highlights, the dark and brooding quality of "Hudson" eventually gave way to a kick ass version of The Band's "Up on Cripple Creek." Jack even dropped some vocals along the way and "El Swing" put the pots on for some burning straight ahead swing, contributing to the festival's remarkable conclusion.

Adding to the overall high quality of music available through this festival, the scene is not to be missed. Forget about food trucks and greasy spoon items because over the course of several blocks there are a host of distinctive and highly-touted restaurants and it's all within walking distance. In addition, the bar and pub adjacent to the host hotel offered up after-hours jam sessions both Friday and Saturday evenings with Pittsburgh heavyweights Roger Humphries and Poogie Bell heading up the ensembles. At these hangs, it was easy to catch a quick conversation with any one of the musicians in town for the festival. So could a well healed jazz lover really ask for much more? Not really.