Maisha: There Is A Place 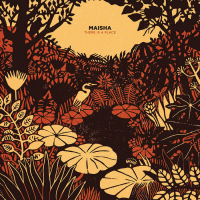 The London jazz scene, which is in 2018 more active and characterful than it has been since the jazz-dance movement of the 1980s, offers up another jewel with this debut physical-release by spiritual-jazz septet Maisha. The band, led by drummer Jake Long, surfaced in 2016 with the download-only live album Welcome To A New Welcome (Jazz Re:freshed) before gaining a bigger profile as the group chosen to open the epoch-defining various-artists compilation, We Out Here (Brownswood, 2018). That album was recorded under the light-touch supervision of reed player Shabaka Hutchings, whose own disc Your Queen Is A Reptile (Impulse!, 2018), made with his Sons Of Kemet band, is itself a diamond of Koh-i-Noor proportions in the London jazz crown.

There Is A Place, its provenance in part rooted in the late 1960s and early 1970s work of Pharoah Sanders and Alice Coltrane, is lush, strings drenched and transportingly beautiful. It is the flip side of ferocious semi-free London duo Binker and Moses' albums on the Gearbox label. The Maisha and Binker and Moses albums, together with Yorkshire saxophonist Nat Birchall's Cosmic Language (Jazzman, 2018), which is foursquare in the mid-period John Coltrane tradition, plus Emanative's Earth (Jazzman, 2018) and Sarathy Korwar's My East Is Your West (Gearbox, 2018), two looser transcultural-outings, between them cover the full-spectrum of British spiritual-jazz.

Maisha's core line-up features some of London's most compelling young musicians, including saxophonist and flautist Nubya Garcia, guitarist Shirley Tetteh and keyboardist Amané Suganami . They are augmented on There Is A Place by a string quartet. Long's arrangements and engineer David Holmes' mixdown winningly combine to suggest a larger string ensemble. Another guest is trumpeter Axel Kaner-Lindstrom, whose work alongside Garcia also sounds bigger than the sum of its parts.

The line-up is completed by harpist Maria Zofia Osuchowska. She only takes the spotlight briefly but her presence makes a strong impression. Harps are making a jazz comeback in London. Binker and Moses featured guest harpist Tori Handsley on Journey To The Mountain Of Forever (Gearbox, 2017) and Alive In The East? (Gearbox, 2018), and Ukraine-born harpist Alina Bzhezhinska, who opened the Barbican Centre's November 2017 Pharoah Sanders-headlined event, A Concert For Alice And John, has released her debut album, Inspiration (Ubuntu, 2018).

Jazz music has some giant drummer-led albums in its back catalogue, but not many in the spiritual-jazz niche. Roy Brooks' masterpiece The Free Slave (Muse, 1972) is one, percussionist James Mtume's Umoja Ensemble's Alkebu-Lan: Land Of The Blacks (Strata-East, 1972) is another. And, not forgetting drummer Moses Boyd's co-leadership of Binker and Moses, Maisha's There Is A Place makes one more.

Osiris; Azure; Eaglehurst / The Palace; Kaa; There Is A Place.