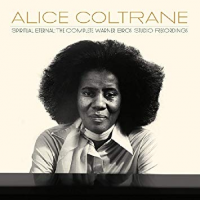 The most arcane albums in Alice Coltrane's catalogue are not, as is widely supposed, the post-Impulse! mid-1970s discs collected on Spiritual Eternal: The Complete Warner Bros Studio Recordings. They are instead a series of cassettes Coltrane released in limited editions on her Avatar label during the 1980s and early 1990s, when she had retired from the public arena and was focusing on devotional music and leading a meditation centre in California.

Unlike the Avatar recordings, the three albums which make up the 2xCD set Spiritual Eternal still have one foot planted in jazz and the wider African American musical tradition. The discs—1975's Eternity, 1976's Radha-Krsna Nama Sankirtana and 1977's Transcendence—are transitional works, neither full-on jazz nor full-on devotional. A fourth and final Warner Bros album, Transfiguration, not included in this set (it was recorded live at UCLA), was released in 1978.

Coltrane returned to the spotlight briefly in 2004 with a superb swansong, the back-to-jazz Translinear Light (Impulse!). Along with work with her husband, she also recorded with Joe Henderson, McCoy Tyner, Charlie Haden, Carlos Santana and, back when she was still Alice McLeod, with Terry Gibbs. But for a musician of such singular vision and enormous influence, Coltrane's recorded archive is a modest one. We cannot tell what wonders she might have conjured had she continued making jazz-informed discs between 1978 and 2004. Given that 26-year gap in output, everything Coltrane did record is to be doubly treasured, including all four of the Warner Bros albums.

Legend has it that Coltrane was signed to Warner Bros after producer/entrepreneur Bob Krasnow spent a mescalin-fuelled night at the Fillmore West in San Francisco. At the gig, Krasnow bumped into his friend Stan Marcum, Santana's manager. Back at Marcum's home, the guys got wacked on opium and Marcum put some of Coltrane's Impulse! albums on the hi-fi. Krasnow decided there and then that he had to sign Coltrane to Warner Bros, then a cutting-edge rock label. A few days later he heard that Impulse! were considering letting Coltrane go and made his pitch. The story has the ring of truth.

Eternity, Radha-Krsna Nama Sankirtana and Transcendence were all produced in partnership with Coltrane's Impulse! producer, Ed Michel, another refugee from the icy corporate wind blowing through the once artist-led label. The discs touch on blues, gospel and Hindustani liturgical music as much as they do jazz. It is an engaging and disarmingly heartfelt mixture which has been grossly undervalued over the decades, especially by jazz purists.

A common thread running through the albums is Coltrane's Wurlitzer organ, which she introduced on the 1971 Impulse! album Universal Consciousness. She also plays Fender Rhodes, acoustic piano and harp, but it is the Wurlitzer that is heard most often. There is no denying that Coltrane's enthusiastic embrace of the instrument's reedy sound takes some getting used to, but the aural reset is worth it. According to her biographer, Franya Berkman, Coltrane's choice of the Wurlitzer came to her in a vision which even told her the precise model to choose. It was an 805 Centura that included an Orbit 111 analog synthesizer with a pitch-bending ability on one of its three keyboards, a feature that Coltrane used liberally.

The instrumentation on the three albums is otherwise quite disparate. Eternity opens with a 16-piece big band augmented by a string ensemble on the cinematic "Spiritual Eternity," which clocks in at an all-too-brief 2'55." That is followed by a solo harp feature; two tracks with bassist Charlie Haden, drummer Ben Riley, conga player Armando Peraza and Carlos Santana (billed for contractual reasons as A. Friend) on timbales. The final track is Coltrane's strings-drenched "Spring Sounds," taken from Stravinsky's Rite Of Spring, continuing a strand of music which she introduced on the 1972 Impulse! album Lord Of Lords with "Excerpts From The Firebird."

Radha-Krsna Nama Sankirtana is more consistently devotional in character, with most of the tracks featuring Coltrane accompanied only by a voice and percussion ensemble comprising members of her Vedantic Center. The 18'59" closing track, "Om Namah Sivaya," however, has Coltrane on Wurlitzer in an extended improvised-duet with her 13-year old son Arjuna John Coltrane, Jr. on drums. The young man is no Elvin Jones or Rashied Ali, but he makes a remarkably good fist of things. Transcendence is another mostly devotional disc. The choir is more accomplished than on Radha-Krsna Nama Sankirtana, with some outstanding gospel-style singers and Indian-born percussionists.

Spiritual Eternal: The Complete Warner Bros Studio Recordings puts back into circulation an overlooked chapter of the Alice Coltrane story. It contains music that deserves reconsideration and that repays listening with open ears and an open mind. Next up from Real Gone, hopefully, will be Transfiguration, the 1978 Warner Bros live album mentioned above. Made with bassist Reggie Workman, drummer Roy Haynes and a string ensemble, its reissue is long overdue.

Chris May is editor of the British style and culture magazine Jocks&Nerds.