By Mark Corroto
December 2, 2010
Sign in to view read count 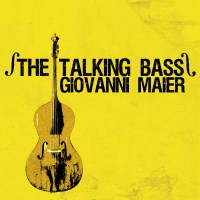 Students of jazz have long known that the bassist can be the hippest musician on the bandstand, constantly listening, and rarely featured. That's why, when a first class bassist like Giovanni Maier gets a chance to lead and present his compositions, it should be a special event. That is just what The Talking Bass is: a vehicle to feature not only his playing, but his writing as well.

Maier is a constant sideman to the likes of Stefano Battaglia, Daniele Cavallanti, and Enrico Rava, and is a member of the Italian Instabile Orchestra. Where his previous recording with featured guitarist Marc Ribot, Technicolor (Long Sound, 2008), was a detonation of electricity, this session creates its sparks acoustically.

Naturally, the recording features Maier's colossal sound both plucked and bowed. Opening the disc in a multitracked duet with himself, Maier extends his energies as an umbrella over the session. On the next eight tracks he is joined by violinist Emanuele Parrini and trumpeter Luca Calabrese, plus Los Angeles band leader/drummer/Nels Cline sideman, Scott Amendola. The quartet presents a mix of energized compositions and attention grabbing free jazz, all regulated by Maier's touch.

Maier writes lengthy pieces that reshape themselves organically. The fury of "Disk Dosk" finds Maier and Amendola churning white water under the applied soloing of Parrini's violin, then Calabrese's agreeable trumpet steps away from Maier's bowed solo into the restyled and agreeable atmosphere, playing with businesslike precision with Parrini. These sliding and shifting themes should be familiar to fans of bassist Mario Pavone, and Maier makes great use of his penchant for adjustment.

He also writes bebop phrases, as in the swinging "Leroy Vinegar," with a sometime scampish swagger, or "Wrong Is Right, where Amendola is given leave for an outlandish drum solo. The band plays a bit open and free on "Due Cellule" and adds some effects (via Amendola) with "Pampaluna."

A solid session, made all the better knowing it was all recorded as first takes. Impressive.