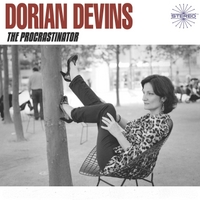 Ginny Carr and the Uptown Vocal Jazz Quartet recently paid proper homage to vocalese master Eddie Jefferson with the song "He Was the Cat," from Hustlin' For A Gig (HouseKat Records, 2012). Jefferson, along with Clarence Beeks (King Pleasure), specialized in writing lyrics for and singing the more notable jazz compositions, like "Moody's Mood for Love" and "Parker's Mood." This rarefied musical form has remained dormant for many years, waiting for a new talent to pen new lyrics for old instrumentals. Enter New York City native Dorian Devins on her debut, The Procrastinator. With no shortage of guts does she enter this honored fray, seasoning a collection of standards with her lyrically applied talent to hard bop giants including trumpeters Lee Morgan and Kenny Dorham, and saxophonist Wayne Shorter.

Devins possesses a well-behaved and muscular alto voice that complements her disciplined singing style, one guided by melody in the midrange, not unlike Miles Davis trumpet vision of the '50s and '60s. Standards first: "Let's Get Lost" is a naked wink at Chet Baker, sung minimalistically, sans vibrato. "I Guess I'll Hang My Tears Out to Dry" could have easily acknowledged Dexter Gordon, with saxophonist Peter Brainin turning in a densely melodious solo. "Better Than Anything" swings as hard as any waltz can. Devin's singing is crisp and exact and very hip. "Speak Low" is given a breezy Latin vibe where Devins deftly surfs among its waves.

The vocalese: Devin's supplies moody lyrics to Shorter's abstract "Momentum," based on "Deluge," from Juju (Blue Note, 1964), drummer Steve Johns capturing Tony Williams' post-bop groove. But it is the title cut, Morgan's "The Procrastinator," where Devins absolutely kills. Bassist Karl Kaminski introduces the piece with staccato arco strokes made Baroque by Devins' arrangement and singing. She navigates her (and Morgan's) crazy counterpoint through verses that avoid the anachronistic tendency to pepper the lyrics with jazz allusions. She chooses a literal interpretation of the title, spinning a tale of putting things off. The song is broken by a swinging interior of solos, with Richie Vitale offering a full-bore trumpet solo.

Devins' other adaptations, Dorham's "La Mesha," from saxophonist Joe Henderson's Page One (Blue Note, 1963), and Morgan's "Lament for Stacy," Art Blakey and The Jazz Messengers' S'Make It (Verve, 1963), and "Soft Touch," also from The Procrastinator (Blue Note, 1967) are all ballads, a format not generally used for vocalese lyric writing. Devins shows herself not only capable, but quite facile in writing for instrumental ballads. Brainin's flute gives the piece a light and airy feel, one that compares well to the previous song on the disc, the Jobim/Lees ballad, "Dreamer." Lou Rainone kicks up in the piano solo, as does Kaminski in his bass outing.

The Procrastinator is a solid jazz vocal debut by an intelligent and thoughtful singer. Devins has one of those voices and vocal capabilities that make her express only confidence. She takea a less often traveled road and blazes a new trail in standards interpretation.

Let's Get Lost; Momentum; La Mesha; I Guess I'll Hang My Tears Out to Dry; Better Than Anything; The Procrastinator; Speak Low; Night Bird; Lament for Stacy; Dreamer; Soft Touch; Time Was.