Cameron Mizell: The Edge of Visibility 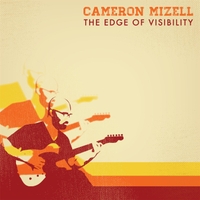 How the mind liberally generates artistic transcendence is a phenomenal concept, and creating music is a customary form to express the ethereal otherworldliness of what is beyond the mundane. Guitarist Cameron Mizell's fearless spirit travels to a different cosmos with his album The Edge of Visibility. Mizell undauntedly rambles the peripheries of his imagination.

The album epitomizes a vast and inventive sonic encounter, an unconventional plunge into subliminal escape and mood-altering cognizance. The melodic and stirring "These Sheets" has a meditative current. The upshot is a peripatetic mind engrossed with nostalgia. Tripping down memory lane and roving through bottled-up mishaps are some of the knitted effects. The tuneful guitar on "A Second Trapeze" is a solid, soothing cut that substantiates Mizell's razor-sharp skillfulness. The freezing impression displays a sequence of historical imagery. Ruminating over discernibility and fancy interpretations elicits awakening, especially with the rich and reassuring guitar playing. "Everyone Has Blind Spots" hypnotizes a pensive soul. The introspective sound generates a disconsolate touch yet brushes it with an idyllic appeal, intensifying the emotions with highlighted recollections.

With its astrophysical atmosphere, "Rooster Tail" is a complex, eccentrically good and commendable track. It enigmatically gyrates the mind with its dark, ambiguous turns. There is a tremendous exhibition of menacing guitar flow electrifying both the sensible and the subconscious level. "Rooster Tail" is a challenging composition that is elevating and unsettling in its serenest form.

Prelude; A Second Trapeze; These Sheets; The Edge of Visibility; Rattlesnake; Rooster Tail; Everyone Has Blind Spots; Alice.