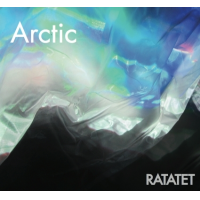 The Ridgeway Arts non-profit venture in San Francisco Bay Area, was established by bassist/educator Jeff Denson, to provide and promote performance, education and recording opportunities for serious artists. The electro- acoustic ensemble, Ratatet, released Arctic as part of this program, and is an example what can be accomplished with dedication and determination.

Ratatet was formed by drummer Alan Hall, with the intention of performing jazz that is expansive and ingenious. With the novel approach of having bassoonist Paul Hanson and trombonist John Grove on the front line, the band opens up melodic possibilities from the opening "Electrick." Dillon Vado is the vibraphonist, and he sets the mood for "Father's and Sons," carried along by bassist Jeff Denson, who takes the lead role in the title track, using the bowing technique. "Red State, Blue State," is a spirited prancing number where Hanson switches to tenor sax, trading licks with the trombone, as the vibraphone dances spryly.

Hall is the composer, and has an ability to conjure up quirky time signatures, that have the sensation of almost being out of balance, but they work. "In A Sense , Innocence," is one of those, maintaining a forward, almost hurried, momentum. "Word by Word," is a steady orchestration, pushing the horn charts, for a crisp attack. The bassoon gets the prime solo spot on "Basquiat," answered cleverly by the trombone, as they each get their room to move.

"What Cy's Eyes See," commences with light vibraphone textures, as the bass leads the others in, releasing a series of improvisations. Hanson gets the electrified bassoon intro honors on "Gataxi," a futuristic escapade with a dramatic ending. Extra instruments are brought in for the culmination piece "Returning," a lush arrangement with apparent classical inclinations.

With so many jazz outfits nowadays continually reaching back into the archives to cover standards and rework the catalog, it is refreshing to hear such an adventuresome ensemble as Ratatet. The depth of their collective skills allows them to drive their music right to the edge, where the fun begins; after all, music should be about enjoyment and appreciation, that's why we're all here.