Mostly Other People Do the Killing: The Coimbra Concert 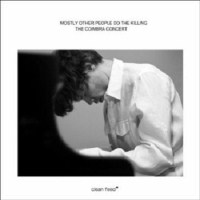 The stand-up comic begins, "I went to a day of rage riot the other day, and a Moppa Elliott concert broke out." He might continue with, "Take my jazz canon, please." That is just what the bassist's quartet, Mostly Other People Do The Killing, does—seize the jazz standard and demolish it. The Coimbra Concert is the first live recording by the group, following its fourth studio record, Forty Fort (Hot Cup, 2009).

Just as beboppers were criticized for ruining swing music, and before that swing for stepping on traditional jazz, the members of MOPDTK are the villains in any neoconservative diatribe. Like Charlie Parker and Dizzy Gillespie's bebop revolution, saxophonist Jon Irabagon and trumpeter Peter Evans can skate circles around just about any performer playing music today, as evidenced on Irabagon's Foxy (Hot Cup, 2010), with drummer Barry Altschul, and Evans' Scenes In The House Of Music (Clean Feed, 2010), with free jazz heavyweights Evan Parker, Barry Guy and Paul Lytton.

The nucleus of these two live dates from May 2010 are bassist Elliott's compositions and drummer Kevin Shea's versatile and elastic playing. Each piece seemingly begins with a theme but, before long, MOPDTK's attention deficit creates disorder. You are as likely to hear "Night in Tunisia" played in double time (on "Blue Ball") as you are pieces of John Coltrane's "Acknowledgement" (on "Pen Argyl") and some Pink Floyd ("Round Bottom, Square Top"). The players don't dishonor the jazz tradition as much as they reverse gravity it into their black hole of music, devouring all styles and techniques.

The band switches between a New Orleans' marching band on "Round Bottom, Square Top" to a piano-less Miles Davis/Coltrane ensemble on "Factoryville," that morphs a blues into an Indian raga with a ringing telephone. Elliott and Shea create the latitude for Irabagon and Evans' flights of freedom and extended technique soloing, and their talent is immense.

Like Muhammad Ali defeating the then heavyweight champion Sonny Liston in 1964, the new champions, armed with speed and style, can easily humiliate all comers of the (now) old schools of jazz.