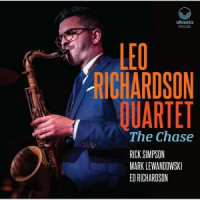 An alumnus of London's Trinity College of Music, tenor saxophonist Leo Richardson, who incidentally is the son of bassist Jim Richardson (formerly of the jazz rock band If), graduated from the College with a first class honours degree in Jazz Performance. Whilst studying at Trinity he was tutored by some world class players including Jean Toussaint, Julian Siegel, Martin Speake, Mark Lockheart and Mick Foster. Since leaving Trinity he has become an in-demand saxophonist on the London Jazz scene. He's performed with the likes of Jamie Cullum, Gregory Porter, Ronnie Scott's Jazz Orchestra, Clare Teal, Dick Pearce, Norma Winstone and Jim Mullen to name just a few.

What is extraordinary about Richardson's debut album The Chase is how familiar all the tracks sound. Whilst these hard bop numbers are all Richardson compositions they instantly evoke a period of 1950s-60s jazz, typified by such luminaries as Art Blakey, Hank Mobley and Dexter Gordon. The fiery head to "Blues for Joe," a tribute to Joe Henderson, leads into a blistering solo by Richardson, whereas "Demon E," with Quentin Collins soloing expansively on trumpet, evinces a strong evocation of Art Blakey and the Jazz Messengers, indeed all that's missing is the drummer's trademark press rolls. "The Curve," again with Collins, evokes memories of the irresistible recordings of Lee Morgan and Collins's final contribution on the album is the ebullient title track and here Richardson plays with magnificent intensity and speed, the piece being rounded-off by a lightning fast drum solo from Ed Richardson.

There's a change of pace with the stately ballad "Elisha's Song" and again the mood changes with the modal "Mambo." There's a return to lively hard bop with "Silver Lining," dedicated to the late Horace Silver and featuring some arresting piano from Rick Simpson. The standout track saved for last, and the longest at 10 minutes, is the Impulse! era Coltrane-esque "Mr Skid" featuring guest Alan Skidmore, one of Britain's finest saxophonists. Here the two tenors, playing in harmony, bounce notes off each other, a configuration reminiscent of the great twin tenors of the 1960s, the Jazz Couriers featuring Ronnie Scott and Tubby Hayes. There are appropriately coruscating solos from both saxophonists and the whole piece culminates in a powerful crescendo of saxophones. Kudos goes to Richardson who has succeeded in writing original tunes that channel the Blue Note songbook but, amazingly, they do so without a trace of plagiarism. All the selections sound new and fresh as does this remarkable saxophonist's playing.