Home » Jazz Articles » Mostly Other People Do The Killing: Paint

Mostly Other People Do The Killing: Paint

By Jerome Wilson
October 16, 2017
Sign in to view read count 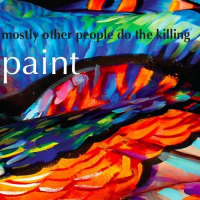 Mostly Other People Do the Killing have released their second CD of 2017 and, in keeping with the group's unpredictability, it's a bit of a curve ball. Whereas on previous releases they've ranged in size from a quartet to a septet, this time they've cut themselves down to a simple piano trio. Other than that, it's business as usual. Bassist Moppa Elliott's original compositions are still named for towns in Pennsylvania (which this time all include colors in their names), Kevin Shea still often sounds like he's kicking his drums down the stairs and the music itself is the customary patchwork quilt of ideas that erratically change tempo and tone within each track.

The star of the project is MOPDTK's most recent recruit, pianist Ron Stabinsky who executes Elliott's mad schemes with remarkable dexterity and clarity. He keeps a friendly Erroll Garner-like springy blues lope going through "Yellow House" when he isn't suddenly speeding up or doing fractured stutter steps in front of Shea's choppy drumming. On "Orangeville" he mixes gutbucket blues and Monk-ish chord progressions in his left hand while doing jittery high trills with his right. On the one non-original, Duke Ellington's "Blue Goose" (which also happens to be a town in Pennsylvania), he plays the dreamy melody with measured but playful elegance, ceding the foreground to Elliott's dapper bowed solo and Shea's pirouetting drums.

Stabinsky also shows that he can do normal jazz piano on some tracks. He plays funky bebop lines on "Green Briar" that somehow end up close to McCoy Tyner's banging chords on John Coltrane's version of "My Favorite Things" and does overripe sentimental balladry on "Golden Hill" that is instantly undermined by Shea's dive-bombing drums. At the other extreme he's a whirlwind of sound on "Black Horse," playing different tempos with each hand before settling on one boisterous hard bop line.

On "Plum Run" Elliott leads the group through a comically lurching melody which turns into full trio chaos before coalescing around Stabinsky's cascading runs. "Whitehall" ends the disc with slow walking stride-based piano, a steady walking bass line and crazed, stomping drums, a blend that morphs briefly into a hip hop beat before climaxing in a boiling frenzy.

Hearing MOPDTK's music played by a smaller configuration gives you a better appreciation of the band's inner workings, particularly how Kevin Shea's drumming pushes the music along, despite its seeming random chaos, and how Moppa Elliott's bass is often the only thing holding this lunacy tethered to Earth. Meanwhile Ron Stabinsky demonstrates the flashy technique and multiple command of styles of a Jaki Byard and fits right into the music's craziness. This CD presents a more focused version of MOPDTK than we've seen in the past and is one of their more accessible recordings.