By J Hunter
December 9, 2009
Sign in to view read count
Pianist Brad Mehldau got flak for naming a series of discs "The Art of the Trio." But it really is an art, and no more so than when the lead instrument is not a piano, or any member of the keyboard family. Think about it. Without the myriad capabilities of Mehldau's instrument, a trio's leader must have an adamantine concept for the date, as well as a rhythm section that can do a lot more than just keep time. Otherwise, that leader may find himself hanging out in the breeze. Here are three examples of how to do it right.

Longtime fans of guitarist Kurt Rosenwinkel may respond to Reflections the way some people reacted to Mostly Other People Do the Killing's straight-no-laughter cover of Billy Joel's "Allentown": "Okay, where's the punch line?" However, Rosenwinkel and his two stellar partners—bassist Eric Revis and drummer Eric Harland—are decidedly in earnest, and that level of seriousness is what puts this wonderfully intimate session over the top.

Rosenwinkel's in-the-clear opening to Thelonious Monk's "Reflections" literally mirrors the title of the composition, but has none of the dissonance associated with the composer. That void could be seen by traditionalists as "cleaning up Monk," a charge that could be tacked onto Rosenwinkel's take on Monk's "Ask Me How" later in the disc. And yet, both tunes are so cool that aesthetic arguments seem moot.

Given Rosenwinkel's past performances, it's easy to imagine him deconstructing standards like "More Than You Know," strapping the remains onto his rocket-propelled axe, and firing it out into space. But Rosenwinkel's approach is all about respect...not only for the pieces and their composers, but for the time in which this music comes from. "You've Changed" is as warm and comfortable as a glass of mulled cider, and Dizzy Gillespie's "You Go to My Head" absorbs the 21st century reverb and stays too smooth for school. Revis' solos on "Reflections" and "Ask" have marvelous depth and lyricism, while Harland creates a world of swirling effects throughout the disc—even when it seems he's barely touching his kit at all.

In the middle of this mash-up of classics is Rosenwinkel's own composition "East Coast Love Affair." First recorded in 1996, this tune almost qualifies as a standard on its own. Given the same smokey jazz club approach, "East Coast" blends in seamlessly with the rest of the date's material. Again, for fans of Rosenwinkel's earlier work, Reflections may require a perspective adjustment. But given the beauty and creativity of the disc, the paradigm shift is well worth it.

Visit Kurt Rosenwinkel on the web. 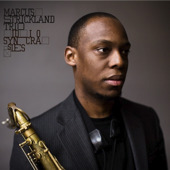 Imagine walking the high wire over a shark tank during a hailstorm. As metaphors go, it's pretty vivid and pretty dangerous. It's also the best way to illustrate the delicate balancing act that comes with fronting a sax trio date—which may explain why it's rarely attempted, and rarely successful. With Idiosyncrasies, the Marcus Strickland Trio succeeds with flying colors.

The Strickland original "Cuspy's Delight" sets the disc's winning tone, as Stricklands' tenor sax torches the off-time establishing figure while his brother E.J. Strickland, on drums, counters and embroiders with impunity. The piece maintains its aggressive direction as Marcus backs off and E.J. launches his own solo, to make a tremendous noise with two sticks and a drum kit. Bassist Ben Williams has no intention of sitting back and watching the brothers duke it out: he is resonant to the max on Jaco Pastorius' "Portrait of Tracy"; his solo on Marcus' own "Middleman" helps the piece get straight to the heart and soul; and Williams rumbles and growls while E.J. sets up the hypnotizing groove on Bjork's "Scatterheart.

The latter track is an example of Marcus' delightfully eclectic choice of cover material. Idiosyncrasies closes with the breakneck "Time To Send Someone Away," a creation of Swedish singer-songwriter Jose Gonzalez and DJ/rapper Magnus "Embee" Bergkvist. OutKast's "She's Alive" is a stroll in the night through a less than benign neighborhood, lit only by Strickland's luminous tone, and E.J.'s titanic solo at the end of Stevie Wonder's "You Got It Bad, Girl" segues seamlessly into Williams' in-the-clear opening to Malian singer Oumou Sangare's "Ne Bi Fe."

Marcus expertly stretches the outside of the envelope on every solo, and his sense of narrative never falls flat. "Rebirth" is a passionate eulogy as full of love as it's full of grief, and he overdubs a flock of clarinets to build the technical marvel "The Child." Marcus' past work with trumpeter Dave Douglas showed the reed player had the talent to mount a project like Idiosyncrasies, but the proof is in the pudding. Predictably, this pudding is exceptionally tasty.

Visit Marcus Strickland on the web.

The first thought that occurs during "Monk/Trane"—the opening cut on bassist John Patitucci's Remembrance—is of saxman Joe Lovano's longtime partnership with guitarist Bill Frisell and drummer Paul Motian. As with that groundbreaking unit, the John Patitucci Trio has three players building one vibe, rather than two players following one leader around. Patitucci and Lovano expertly counter each other on "Monk/Trane" while drummer Brian Blade works his own mystical patterns. Considered separately, it sounds like three musicians living on three islands; considered as a group, it's a mesmerizing collage that adds up to an outstanding picture.

Along with investigating the possibilities of this united musical front, Patitucci and his partners pay tribute to friends and influences, both past and present. The title track—a Patitucci solo piece that closes the disc—is dedicated to the late saxophonist Michael Brecker, while other material was written in appreciation of artists ranging from saxophonist Sonny Rollins (the grooving "Sonny Side") to the late composer Olivier Messiaen (the off-kilter Second Line work-up "Messaien's Gumbo."). Lovano's blistering solo on "Joe Hen" is obviously driven by his love for tenor sax legend Joe Henderson, while the Freddie Hubbard homage "Blues for Freddie" is out to funk it up first and ask questions later...just like the late trumpeter liked it.

The difference between the Patitucci Trio and the Lovano/Frisell/Motian triumvirate is with groove, in that the Patitucci Trio usually has one. This is not to say the latter trio doesn't make amazing, exploratory music; however, because of Motian's fascination with rubato and his insistence on being the ghost in the machine, his collaborations with Lovano and Frisell can meander, often to the point of distraction. Blade may be a minimalist in his own right, but he's always got a definite direction. The chemistry Patitucci and Blade built in the Wayne Shorter Quartet really shines through here, particularly on the floating "Meditations." (Admittedly this piece is rubato, but it's an exception, not the rule.)

Although Remembrance is a great example of an ironclad group aesthetic, Patitucci's best individual work comes on the title track, where he overdubs a doleful piccolo bass solo over his own 6-string electric bass foundation. This is not only Patitucci as craftsman, but Patitucci as a human being who's lost a dear friend—a moving coda for a remarkable release.

Visit John Patitucci on the web.

Tracks: Reflections; You Go To My Head; Fall; East Coast Love Affair; Ask Me How; Ana Maria; More Than You Know; You've Changed.