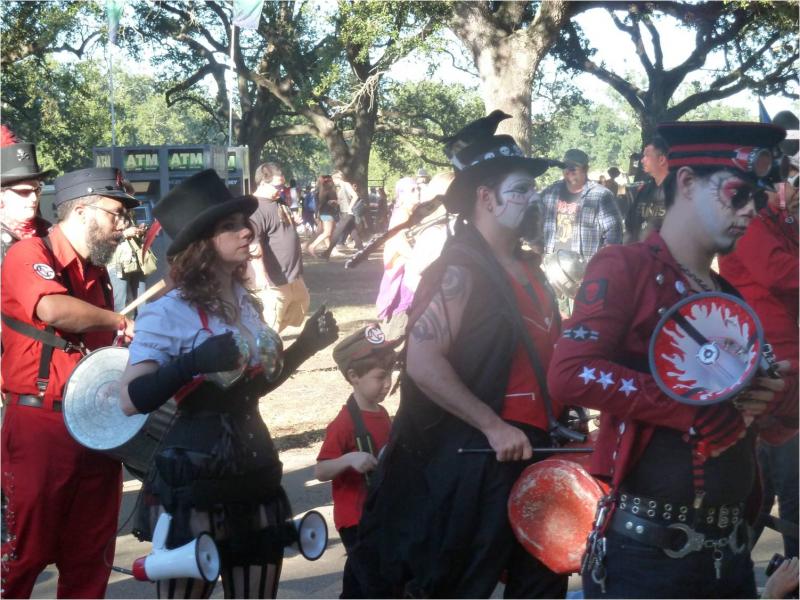 The SONY Make.Believe Stage and The Voodoo Stage were home to the festival's headliners. Friday night featured MUSE and Weezer. MUSE roared onto the stage with a rousing version of "Uprising" and never let up. They treated the fans to a set filled with hits and favorites which included: "Resistance," "Undisclosed Desires," "Supermassive Black Hole," "Starlight" and "Knights of Cydonia." Unfortunately for the audience, which appeared to swell to a point where there were virtually no areas left on the grass infield inside the Track & Field oval to put down a blanket/to sit/to stand, Weezer looked fantastic but were plagued by terrible sound. 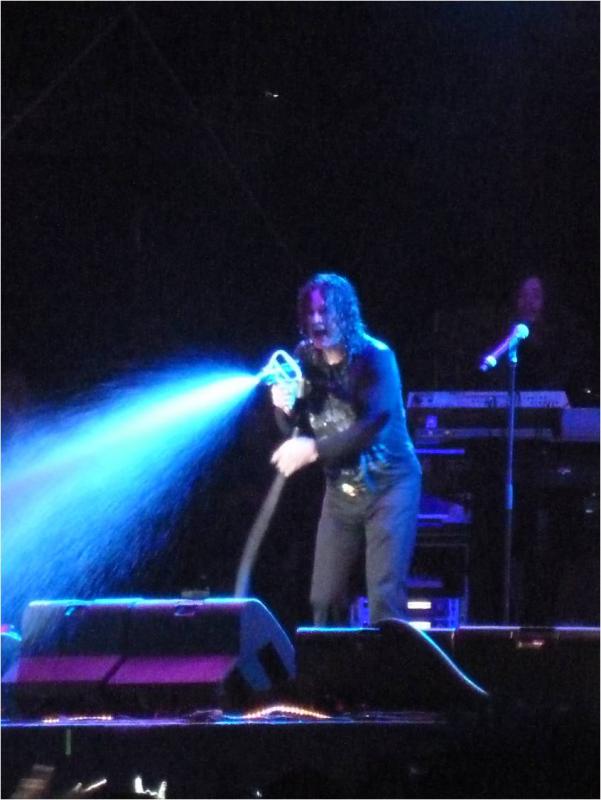 Saturday was Ozzy Osbourne, the self-proclaimed Prince of Darkness (who sauntered out to the center of the stage with an impish evil grin, held court, sprayed the crowd with a hose and sung his classics including "Mr. Crowley," "Crazy Train," "Ironman" and "Suicide Solution") and Tom Morello's Street Sweeper Social Club.

Sunday evening featured MGMT (whose five members performed their entire set dressed in costume as Daphne, Fred, Velma, Shaggy and Scooby). Their set included: "Kids," "It's Working," "Siberian Breaks" and others from their two hit Sony releases [Oracular Spectacular (2008) and Congratulations (2010)]. My Morning Jacket (who also appeared dressed in "wizardy" Halloween attire and played "Wordless Chorus" and "Anytime" while in costume) dazzled the crowd. My Morning Jacket proves over and over again that they are truly superstars. Jim James and Carl Broemel raised the bar for and every guitarist in the audience and gave them something to aspire to. The band, which was so tight and firing on all cylinders, even managed to cover Black Sabbath's eponymous theme song and Al Johnson's Mardi Gras anthem "Carnival Time" (with a guest appearance by Preservation Hall Jazz Band). Their set also included: "Touch Me, I'm Going To Scream," "Evil Urges," "I'm Amazed" and many others. Fittingly, My Morning Jacket closed the festival (on Halloween night) with a fantastic version of "One Big Holiday." 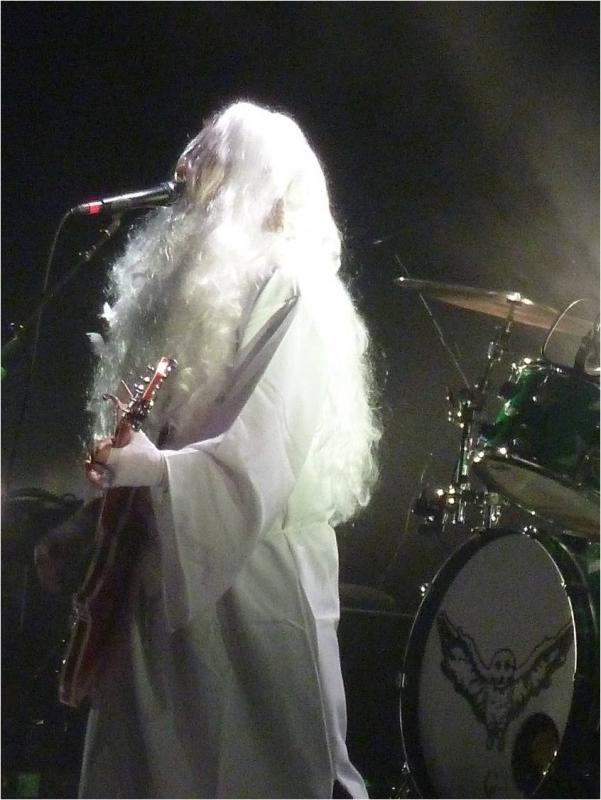 The main stages were home to a large pool of talent over the three days, including Seattle-based first time Voodoo performers Minus The Bear, who are currently on tour supporting their fourth full length recording, Omni (Dangerbird, 2010). Minus the Bear stirred the crowd with their eclectic sound and sturdy instrumentation, giving a solid performance on the last day of the fest, including thanking someone in the crowd for wearing a Bear costume with a minus on it to the show for Halloween! Kentucky-bred Cage The Elephant proved inventive, with a no holds barred performance by the brothers Schultz and the rest of the band tearing- up the stage, with Matt Schultz on lead vocals flinging himself into a frenzy during a set that included "Ain't No Rest For The Wicked" and "In One Ear." Bob Florence, behind talented belter Florence Welch, proved to be even more impressive in a live setting, providing the audience with a set that was as much music as it was performance art. She commanded the stage with flashing red hair and a flowing black dress that twirled in the breeze. The talent flowed with amazing performances by Interpol, Metric, Jonsi, Blackberry Smoke, The Airborne Toxic Event and The Whigs spread out over three incredible days.

These legends and chart-topping acts proved why they were chosen to headline and anchor the festival. They came; they saw; they played and in many cases they conquered. They left the faithful happy and in many cases completely satiated. They were not, however, the only reasons to attend Voodoo.

As in past years, away from the two biggest stages, on the sides of the City Park festival area, the SoCo/WWOZ Stage, The Preservation Hall Tent and The Bingo! Tent featured performances by the Festival's unsung heroes. It was on these three stages that many less well-known and some up-and-coming musicians as well as some very cool local artists plied their trade to dancing, screaming, adoring, smiling and enthusiastic fans.

The SoCo/WWOZ stage featured Friday performances by Big Sam's Funky Nation, who whipped the crowd into a decidedly New Orleans party mood with his, for lack of a better word, funky trombone stylings—the band even covered Gnarls Barkley's "Crazy" a Lady Gaga track; Jon Cleary: Piano, Bass & Drums (the ex-pat Brit produced a stellar set comprised of his distinctive take on New Orleans syncopated R&B); The Soul Rebels and Galactic with Cyril Neville. On Saturday this stage featured performances by Rebirth Brass Band; the incredible Basin Street Records Revue (featuring Kermit Ruffins—who also had a blistering performance on Thursday, October 28th at his Vaughan's Lounge which is buried deep in the Bywater section of the town, Dr. Michael White and Jeremy Davenport), who's set offered up a modern brand of New Orleans jazz, funk, gospel and pop; Buckwheat Zydeco and Jacob Dylan & Three Legs (who's country-influenced set included stripped-down versions of Wallflowers songs like "Three Marlenas" as well as songs from his 2010 Sony release Women & Country and were eerily reminiscent of his father's more recent musical inclinations). On Sunday, the spotlight was on Walter Washington; the soon-to-be-huge Janelle Monae (originally scheduled on a different stage at an earlier time); Macy Gray (who for some reason always goes on late, but still managed to deliver an exhilarating performance to the crowd who had been so patient while waiting for her to emerge on stage) and local hero Troy Andrews, also known as Trombone Shorty. Shorty, who is Jessie Hill's—the writer and performer of the New Orleans R&B classic "Ooh Poo Pah Doo"—grandson is an equally stunning player on either trombone or trumpet. His performance incorporated Jazz, Brass, Funk, Rock, Pop, Hip-Hop into a musical gumbo like no other that the festival had seen. He's a local star right on the brink of a national/global breakthrough. 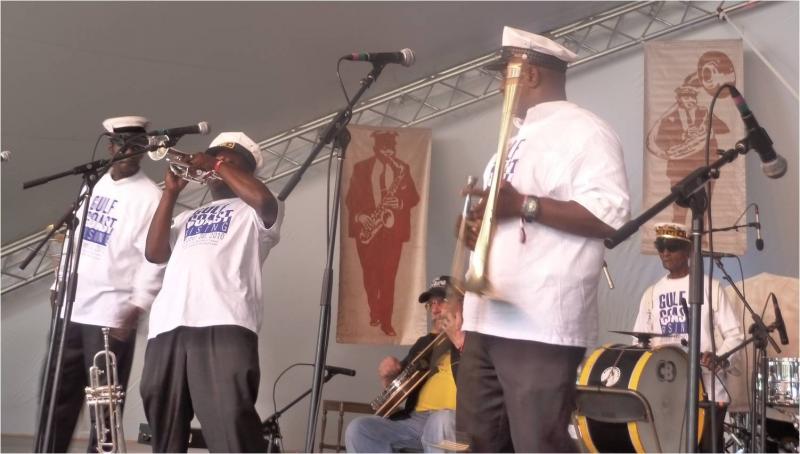 On Friday The Preservation Hall Tent featured an electrifying set by Galactic's Stanton Moore and his trio with Anders Osborne as well as a high-energy-blow-the-doors-off-the-place set by Rosie Ledet. The highlights from this stage on Saturday were performances by The Treme Brass Band with Uncle Lionel Batiste (though for many of the uninitiated viewers of HBO's New Orleans-based hit series Treme who undoubtedly expected to see the band march it may have been strange seeing them play in stationary format); Paul Sanchez And Rolling Road Show Band (featuring special guests Shamarr Allen who joined Sanchez on "Hurricane Party For A New New Orleans" and "Love is Blind" from their Bridging the Gap CD (Threadhead Records, 2010) and John Boutte who performed the theme to the hit HBO series Treme). Other fine acts who graced the Preservation Hall Tent stage during the weekend were Theresa Andersson; Miami's Latin superstars, Locos Por Juana and The Brian Coogan Band with Mike Dillon. 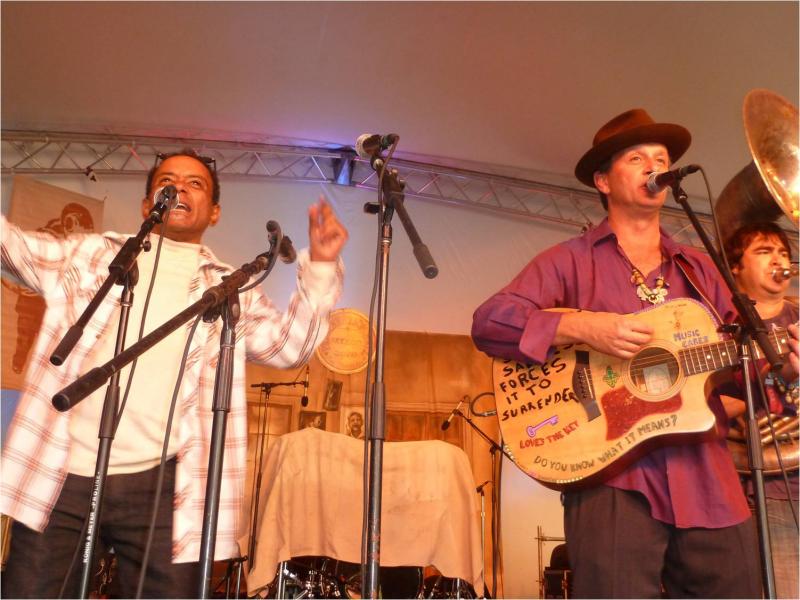 The Bingo! Stage was the stage that featured the most diverse performances. It was graced on Friday by Debauche who describe themselves as singers of Russian hooligan songs performed a sort of funky Klezmer and a rockin' version of "Hava Nagila" as well as the smooth Soul/R&B of Raphael Saadiq. On Saturday The Bingo! Stage played host to local Nawlins up-and-comers The Vettes, led by singer Rachel Vette who's strong set featured '80s guitar-pop with attitude and the crunch garage rock of The Eagles of Death Metal. Sunday featured JP, Chrissie and The Fairground Boys (also plagued by a barely announced schedule change). Led by Chrissie Hynde, who re-asserted herself as the queen of rock 'n' roll's queen, and JP Jones, The Fairground Boys proved that they were more than just a side project created so that Hynde could take a break from The Pretenders. Of special note was a magnificently punky version of "I Wanna Be Your Dog." This stage was also home to a New Orleans Bingo Show performance at the close of the festival.

A fourth stage, Le Plur: Presented by Billboard.com played host to dance/electronic and DJ sets from an eclectic bunch of artists. Hot Chip's incredible set featured a stage full of talented musicians surrounding core members Joe Goddard and Alexis Taylor, bringing out the hits like "Boy From School" and "Over and Over." Internationally renowned DJ Paul Oakenfold took to the stage like a gang of one, accompanied by strobe lights and a throbbing audience who pulsated to the beats. Other highlights include performances by deadmau5; Innerpartysystem, The Crystal Method (DJ Set) and Paul Van Dyk. The faithful who assembled at this stage on each of the three days of the festival did so to dance and express themselves by giving in to the feeling and letting the music take them away. It is quite possible that many of the fans who came to the Le Plur stage stayed there for the entire festival.

In addition to the acts appearing on the secondary stages a "marching band" called the Noisican Coalition roamed the grounds each day providing the attendees with a New Orleans-influenced second line, back-beat percussive delight created by a mixture of handmade instruments as well as modified horns, drums and household objects. The musical mélange produced by this rag-tag ensemble was a treat for both the ears and eyes that could only have been created in New Orleans. Another festival quirk that generated word-of-mouth as well as a number of gawkers was the fire-breathing robot that paraded up and down the festival's paved roads playing a funky trance and techno loop.

A New Orleans institution, The Voodoo Experience has played host to approximately 600 acts. Past performers include Green Day, The New York Dolls, Iggy Pop, Nine Inch Nails, R.E.M., 311, Stone Temple Pilots, Duran Duran, Kid Rock, Panic! At The Disco, Wilco, Lenny Kravitz, Snoop Dogg, Eminem, Lil Wayne, the Red Hot Chili Peppers and Kiss—as well as New Orleans' own Cowboy Mouth, The Meters and Dr. John. Voodoo Fest founder and producer Stephen Rehage has said that it is his ambition to have David Bowie and Tom Waits play the festival as well. Each year he extends an offer to both artists. Next year? Who knows? It'll be interesting to see who it'll be when the line-up is announced. See you in New Orleans for Halloween Weekend 2011 (October 28-30) and The Voodoo Experience—the 13th Ritual (a very scary number)!