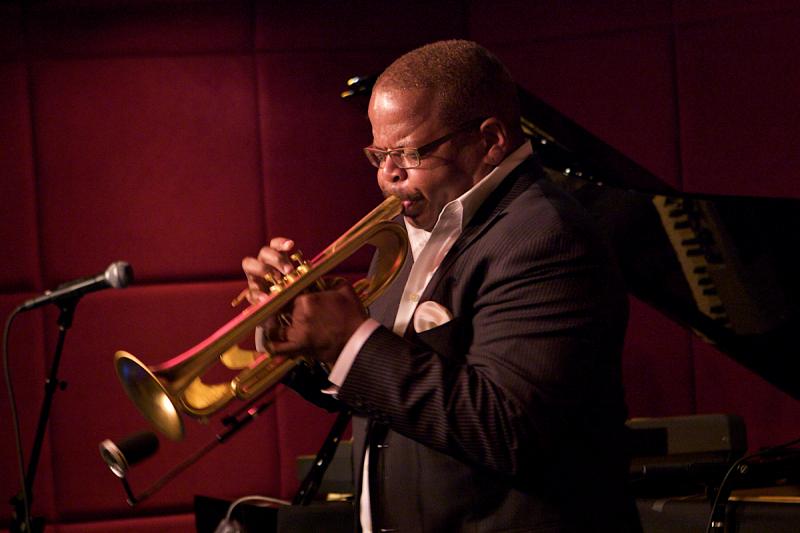 view slideshow
BY BOB KENSELAAR
July 10, 2012
Sign in to view read count
Terence Blanchard
The Jazz Standard
New York, NY
June 21, 2012
Terence Blanchard is an important presence in jazz today on a number of levels. He's one of the most accomplished trumpet players around, consistently showing a great command of the instrument, a distinctive voice, and a highly inventive approach to improvisation. The New Orleans native also plays a high-profile role in jazz education; he's served for more than ten years as artistic director of the Thelonious Monk Institute of Jazz Performance and was recently appointed as the director of the Henry Mancini Institute at the University of Miami's Frost School of Music. And Blanchard is also an enormously prolific composer; he's penned the scores for some 50 films, including a good deal of work with the director Spike Lee. So, as expected, Blanchard showed a strong and commanding presence on the bandstand during his five-night stint in June at the Jazz Standard and, for the early set on a Thursday night, a clear spirit of generosity by featuring compositions by his collaborators rather than his own works.
Blanchard's quintet started off with "Time to Spare," a composition by tenor saxophonist Brice Winston, who's had a ten-year- long association with the trumpeter and shared the front line with him at the Jazz Standard. The lively, post-bop-inflected tune appears as the opener on Winston's first album as a leader, Introducing Brice Winston (Djemba, 2010), which features current and past Blanchard band-mates. Winston took the lead voice, stating the melody, which takes on a relatively simple 16-bar form without a bridge, built on intriguing chromatic shifts in harmony. Blanchard displayed an impressively clear tone and both he and Winston offered remarkably well-constructed solos. Pianist Fabian Almazan, whom Blanchard later introduced as being from "Cuba by way of Miami," followed the two horn players with a solo that exhibited a bit of Herbie Hancock's influence and included sensitive interplay with bassist Joshua Crumbly. A 20-year old student enrolled at Juilliard, Crumbly is the most recent addition to Blanchard's quintet, which also includes the outstanding drummer Kendrick Scott.
The second tune of the set was a special highlight, "Winding Roads," a composition by bassist Derrick Hodge from Blanchard's most recent CD, Choices (Concord, 2011). Blanchard has called the new album a sequel to his to his Grammy-winning, richly cinematic A Tale of God's Will: Requiem for Katrina (Blue Note, 2009), and Hodge's tune fits the description. The recorded version, like all the tunes on the CD, includes a brief narrative by philosopher and social commentator Cornell West, and while the live performance at the Jazz Standard left this out, the tune still evoked the themes West described: freedom, spiritual exploration, and the idea of being true to yourself. Where the recording began with Hodge's double bass arco work, the live performance started with a solo piano feature, with Almazan starting off in a classical vein that evoked a Bach invention and gradually building to contemporary explorations. Winston and Blanchard stated the melody, mainly in 6/8 with some shifts in meter that almost gave it a timeless feel. Blanchard's extended improvisation was marked by echo effects, sometimes subtle, sometimes pronounced, bringing Miles Davis's Bitches Brew (Columbia, 1970) to mind, and Almazan added other textures with nuanced use of an electronic keyboard. Scott contributed some notably fitting percussive touches, mixing mallets, sticks, hands, and fingers when striking his drums and cymbals. 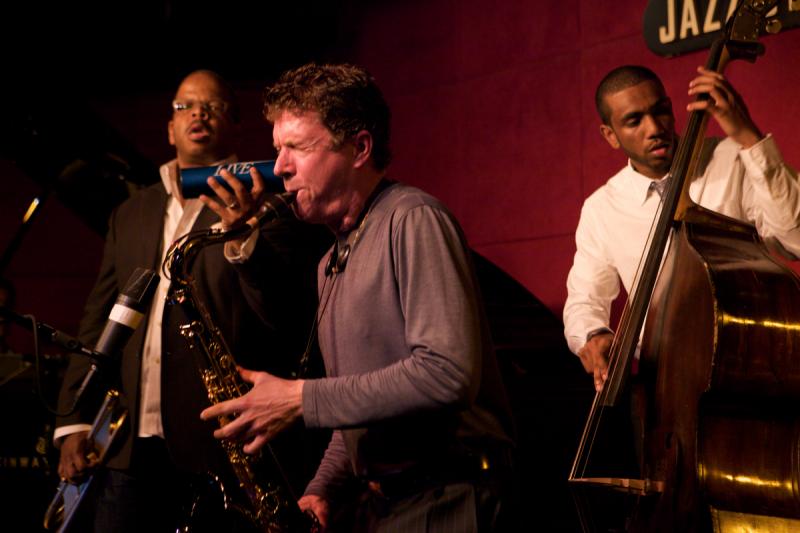 The next tune was a striking change of pace, a medium/up-tempo rendering of the standard "Autumn Leaves," with Blanchard and Winston trading off segments stating the melody. The overall feel was straight-ahead and swinging, with walking bass and a steady, cymbal- driven rhythm. Blanchard was impressionistic and spare in his solo, playing soaring lines and stopping unexpectedly in spots, playing with the form before evoking the melody clearly in his final chorus. Winston's approach was similar, gradually building his solo to incorporate angular lines, and in the end, bringing it back to the melody. Almazan sprinkled in some classical phrasing in his solo similar to his work on "Winding Roads," with Crumbly adding intuitive interplay, shifting from straight walking to more adventurous lines to complement the pianist. The tune concluded with a spirited series of choruses featuring Blanchard trading eights with Scott.

The final tune of the set was "Bounce," which appears on Blanchard's 2003 Blue Note CD of the same name, and was composed by a past Blanchard collaborator, saxophonist Donald Harrison. A simple blues in F, the song was a feature for the youngest member of the band, and Crumbly took an especially extended solo, a portion of which was accompanied simply by Scott's inventive tapping on his drums with his hands. The tune had quite a bit of a New Orleans feel, and Blanchard and Winston appropriately closed it out with some lively collective improvisation. 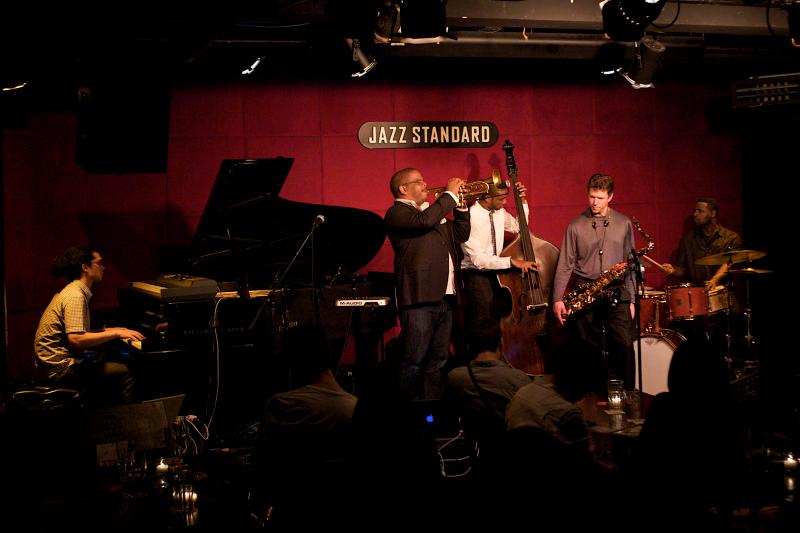 Altogether, Blanchard and his band proved to be simultaneously cohesive and adventurous, and, in a sense, courageous. Cornell West insightfully brings up the idea of courage on Blanchard's Choices CD to describe the challenge of making a powerful artistic statement in jazz. "That's what greatness is; it's the courage to go to the edge of life's abyss, to step out on nothing and still think you're going to land on something."