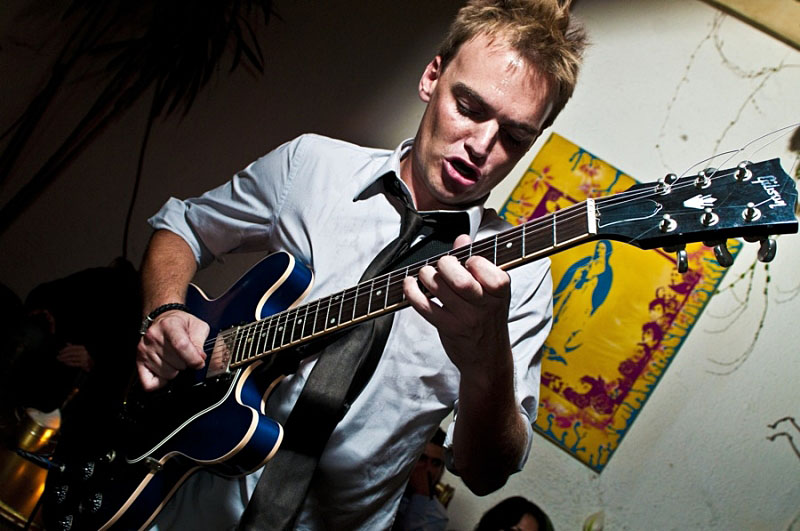 A young, genre-defying guitarist, composer, and writer, Berklee graduate Todd Clouser is an accomplished musician across the modern jazz and rock spectrum, leading a unique path to recognition as an up-and-coming act, finding his own voice performing with musicians from Keb' Mo' to Downtown NYC jazz legend, Steven Bernstein.

Clouser's impassioned performances run from piano balladry to dense jazz and groove, exciting audiences with an approach meant to bend the rules of artistic labeling. A Love Electric documents Todd's most aggressive ensemble yet, an energetic quintet based in the stylings of '70s-era electric jazz.

I knew I wanted to be a musician when... I heard Pearl Jam. I still hear music, new to my ears, that makes me want to be a musician. Evolution and progress, staying committed and letting the rest take care of itself as best as possible.

Your sound and approach to music: I am not a fan of scenes or genres. I just genuinely enjoy expressing, being playful, celebrating the possibility in music.

Your teaching approach: My aim in teaching a student of any level is reaching them at a point that can inspire them to explore music on their own. Any long term success, meaning creative integrity, as a musician is dependent on them doing what they love, and having a voice. That quest can only be aided by a teacher, when I have my best moments as a student, it's when I am set free to explore a new set of tools or ideas given to me that I can take to what I like to do.

I'd love to play with some outrageously eclectic orchestral ensemble. Big passionate Brazilian percussion ensemble, a New Orleans brass section, some Harlem church singers, John Medeski on B; or just play with Tom Waits and feel all that in just a voice and piano.

Havana's Jazz Club in San Jose del Cabo. They let me come in and do my thing when I didn't have a thing. It was a gift to develop there. Still happening.

Your favorite recording in your discography and why? We've managed to make each record unique, mostly due to the headspace I was in while composing and tracking. I like to get the tracking done quickly so there's an emotion and feel to the record. The "Baja" stuff was most successful at that. There were no overdubs, the playing is sparse and simple, and it was my first record looking at things from a jazz perspective in terms of song from and arrangements.

The first Jazz album I bought was: Thelonious Monk's Straight, No Chaser.

What do you think is the most important thing you are contributing musically? I hope it is honesty. That all comes across in being passionate about— and grateful to—music.

I once was a fine soccer player.

Miles Davis, Live at the Fillmore;

How would you describe the state of jazz today? There are so many incredible young players, pushing hard at tradition, and defying labels, its positive stuff. The collapse of the traditional music industry and its packaged approach, or at least its decline, means cats need to get back out and play their instruments. In that sense, there is a bit of a return to personal responsibility, and direction, in young musicians.

What are some of the essential requirements to keep jazz alive and growing? Being kind, the decline of the "jazzhole," embracing possibility. That's why I love jazz, it is rich in opportunity. Rules are consistently being bent.

What is in the near future? We have a tour of the upper Midwest that stretches into October, then it's down to Los Cabos for some residencies and a national tour with some incredible players from Argentina and Mexico. We're going to track an EP down there while on tour, so I'm composing for that. Steven Bernstein is gonna come down and we'll do some shows together in the Baja, which is turning out to be an annual thing.

In the spring I'm working on a new project called Drive By Film, and working on a residency to compose another project called Joy Electric, for a large ensemble, mostly youth players, in California. Hopefully we'll get to the northeast US somewhere between all that, there's a group of guys I need to get with out there.

If I weren't a jazz musician, I would be a: train wreck.