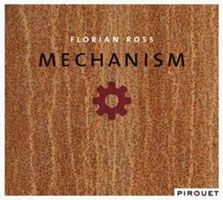 Florian Ross has been a contributing member of the international jazz community since 1998, when he released three provocative discs on the Naxos Jazz label (Seasons and Places (1998), Suite for Soprano Sax and String Orchestra (1999), and Lilacs and Laughter (2000)) that showed the German pianist/composer as a composer of great depth and breadth. A decade and several recordings later, Ross has made his way to perhaps his best-suited label, Pirouet. Mechanism is a solo piano recording that occasionally employs loops to certain success. Ross emerges on this recording as a compositional force in jazz.

Stylistically, Mechanism rests on the fulcrum of Ross' "Rondo Nr. 3" and John Coltrane's "Moments Notice." Both are plush pieces, harmonically rich and melodically embellished. "Rondo Nr. 3" is fashioned after a show tune piano reduction for concert. Tuneful and fun, the piece has its own variable momentum that never veers into dissonance. Both extroverted and introspective, "Rondo Nr. 3" is perfectly structured with predictable direction to the coda, while "Moment's Notice" is the sole standard, and is presented as a ballad exposition. Ross layers the melody with dark filigree, leaving little space for silence, as Coltrane would have done, teasing the beauty out of this often demanding composition.