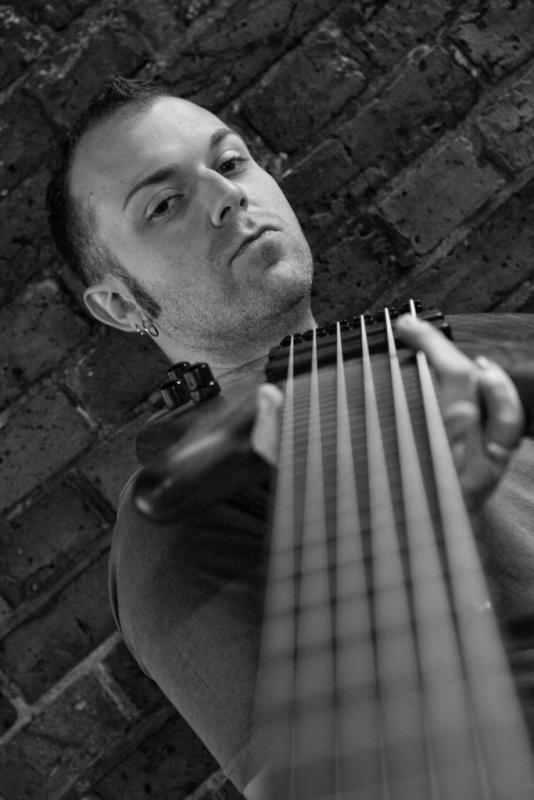 I was born in London and started learning the double bass at school in Dorset with Barry Glynn. I went on to study at The Guildhall School of Music & Drama in London (1999-2003) receiving tuition from Kevin Rundell, Jeff Clyne and Steve Watts. I first picked up an electric bass aged 15 and have never looked back...

I have released two solo albums under my own name: Mandala (2010) and The Knowledge of Things To Come (2011)

Teachers and/or influences?
I'm influenced by a wide range of music and musicians. Probably my biggest influences as a bassist are Eberhard Weber, Stuart Zender, Scott LaFaro and Jaco Pastorius. At the moment I'm listening to a lot of Les Claypool. I like bass players with a really distinctive style and sound...

I knew I wanted to be a musician when...
I had a go on a bass guitar for the first time.

Your sound and approach to music:
I approach all music with an open mind. It's important to know where you fit in as a sideman and what you can and can't do in any given situation. This comes from playing with a wide variety of bands and singers. My sound as a solo artist is very distinctive. You can hear a lot of my influences in my improvisations.

Your teaching approach:
I train my students to teach themselves. I introduce a broad spectrum of learning skills and practice techniques so that students can claim ownership of their development and continue improving independently.

Road story: Your best or worst experience:
On my 22nd birthday I played a sold out show at the Birmingham Academy with The Divine Comedy in front of about 1500 people. It was also the first time I played live on stage with Ben Folds; he is one of my idols and we played a version of Brick (one of my favourite songs). It was the best birthday ever...

Favorite venue:
The 606 in Chelsea. The best jazz club in the world. And the best sausage and mash you'll ever have.

Your favorite recording in your discography and why?
Ian Shaw's Drawn To All Things (2006). Ian and I are both massive Joni Mitchell fans and in 2006 we recorded an entire album of Joni songs with some fantastic arrangements by Janette Mason and Ian. There some great musicians on that record and the bass sounds great. My favorite track is our version of "A Case of You." It's my favorite song of all time and Ian and I play it as a duo. Lovely...

The first Jazz album I bought was:
8.30 by Weather Report.

What do you think is the most important thing you are contributing musically?
Personality and presence. I'd like to think you can hear me in whatever music I'm playing.

Did you know...
I play the sitar too. And the musical saw. I just recorded a track on the saw for Newton Faulkner's new record...

How would you describe the state of jazz today?
Generally in the UK, I would say the scene is struggling. I've been very lucky to have worked with some of the UK best jazz artists over the last ten years and those artists will always have a strong audience. I think it must be very tough for younger players coming through from all the colleges these days. A lot of the smaller venues in London are disappearing....

What are some of the essential requirements to keep jazz alive and growing?
The music needs to remain relevant. It should embrace other styles of music more openly. Jazz used to be pop music back in the day. The only thing that separates it from modern day pop music now is improvisation. You can blow over anything if you want to...

If the music was more relevant and more people connected with it, we wouldn't need to worry so much about funding. Most of the people I play with would never need an Arts Council grant to go on tour...

What is in the near future?
As well as maintaining a busy touring schedule with Clare Teal, I'm also currently working on a new duo project with drummer Steve Alexander called Little Alex. We are combining my live looping with Steve's live drums and electronics. We should have an album out by the end of this year.

Also am about to start working on a new production at The National Theatre with Ben Castle. This runs all through August and September so I've got a busy couple of months ahead!

If I weren't a jazz musician, I would be a:
Writer.