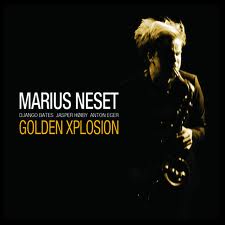 Norwegian tenor saxophonist Marius Neset burst onto the jazz scene with JazzKamikaze while still a teenager, its debut—Mission 1 (Stunt, 2006)—revealing a saxophonist of remarkable maturity and imagination. He shook the life out of simple musical ideas, and in that respect his playing was reminiscent, even then, of the great tenor explorer Sonny Rollins. Traveling at the Speed of Sound (Stunt, 2007) and Supersonic Revolution (Seven Seas, 2010) provided further proof of his prowess within the bounds of this exciting quintet. His first solo album Suite for the Seven Mountains (Calibrated, 2008) was well received in Scandinavia, but only now, with the release of Golden Xplosion is a wider audience beginning to sit up and take notice of a saxophonist whom Guardian jazz critic John Fordham has described as "astonishingly talented."

The circular motif on the intro to "Golden Xplosion" sounds like a warm-up exercise, though Neset's chiming harmonic punctuation makes the piece curiously compelling. The arrival of keyboardist Django Bates, fellow JazzKamikaze pilot, drummer Anton Eger, and Phronesis bassist Jasper Høiby takes the song into the kind of knotty time signatures favored by guitarist/composer Frank Zappa. "City of Fire" comes from a similar place, though Neset's tenor embarks on a spiraling run which is part thrilling improvisation and part adventurous composed lines; the boundary isn't always clear, which makes for absorbing listening. The driving grooves of the rhythm section and the flowing unison lines of Neset and Bates create a lively bebop-funk hybrid, which this water-tight quartet navigates with precision and gusto.

Neset's compositional strength and technical facility is evident throughout, though the Wayne Shorter-esque ballad "Sane" is gorgeous testament to the emotional depth in his playing. Eger's brushes and Høiby's deep bass respond sympathetically to Neset's soulful purr. "Saxophone Intermezzo" and "Saxophone Intermezzo II" are dreamy meditations, inhabiting a space between the ethereal and elegiac. The solo piece, "Old Poison (XL)," is not so much a multiphonic monologue as an inner conversation, with Neset's tenor grunting in nodding recognition to his chatty circular motif, an expansion of the theme explored in the introduction to "Golden Xplosion."

The impetus of the trio piece "Shame Us" is irresistible; Høiby's bass ostinato, contrapuntal lines and little shimmies combine with Eger's ever-changing drum figures to provide both launching pad and ideal accompaniment to Neset's funky streams of sound. Neset's bone-deep funk, interwoven with sophisticated melodic and harmonic lines is embodied in the brilliantly concise "The Real YSj," which also squeezes in rippling sax improvisation. "Angel of the North" owes a debt to pianist Lyle Mays and guitarist Pat Metheny, with its melodic vein and anthemic language, though this number and the haunting "Epilogue" could just as easily have come straight from a JazzKamikaze session.

Visceral and rhythmically vibrant, Golden Xplosion provides instant gratification, though each subsequent listening reveals a little more of Neset's adventurous voice. On JazzKamikaze's second album, Neset penned "Gold, Gold, I want Gold," and with this music he has clearly struck a rich vein.