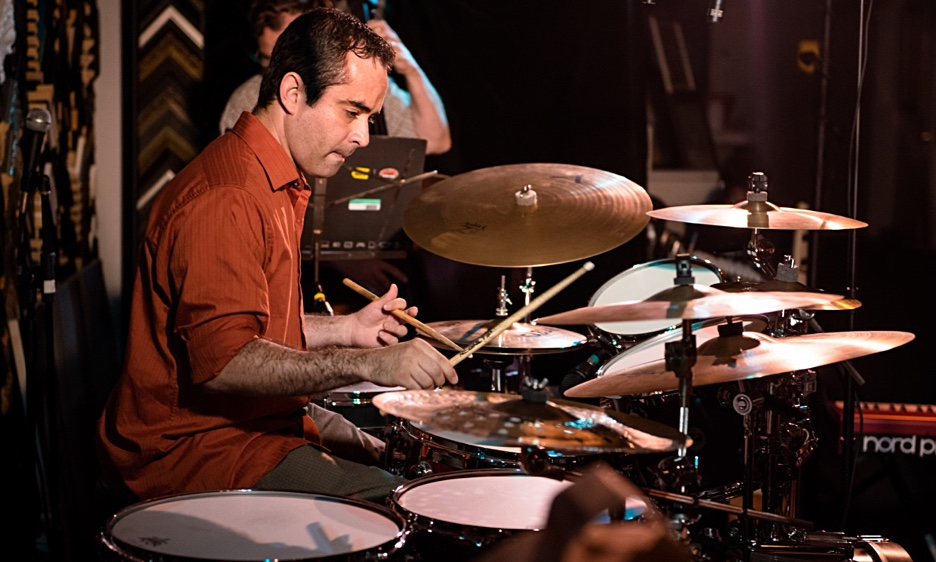 Playing drums became the most important activity in my life.

I strive to play my instrument as well and melodic as possible. I approach the music I play with a lot of respect. I listen to and study many aspects of it, and I focus on developing an appropriate yet experimental and unique style of playing. I'm always pushing myself forward; music is a lifelong learning experience.

Before anything, I do my best to make my students as comfortable as possible during their lessons. I think one can learn a lot more in a friendly environment. I believe it is important for musicians to be well-rounded and, at least, familiar with and able to play (to a certain degree) most styles of music. At the same time, I believe that eventually it is important to work with the student on his/her chosen genre.

Man, if I could put together Chick Corea, Paul Desmond, Freddie Hubbard, Mike Stern, and Stanley Clarke in the same room, I would be in heaven. I've had the great pleasure to work with Mike Stern. It was an unforgettable experience.

One of the most exciting gigs I ever had was when I performed at Blue Note with Bossa Brasil® for the third time. We were playing the late set on a Saturday night. I had a great band with me with Dmitry Baevsky on alto saxophone, Jerry Weir on vibes, Robert Rodriguez on piano, and Joonsam Lee on bass. It is always an immense pleasure to play at Blue Note but this time it was extra special. We were playing after Roy Haynes' band, featuring Pat Metheny. No pressure, right? I remember Pat was set up on stage left and that's where I set up my drums (piano was on stage right). I just kept thinking that moments before, one of my all-time heroes was playing at that exact same spot. It was an unforgettable night.

Blue Note in New York and Mondo in New Jersey.

Artistically, my new album, Five Roads, is my favorite because it features mostly my own compositions. In particular, the track "Bebeto" is the best tune I have written so far in my opinion. It is challenging to play and it is truly transcendent. I remember getting the chills multiple times when we were recording it. Andrew Beals (alto saxophone, Bob Rodriguez (piano), and Gary Mazzaroppi (bass) did an outstanding job in helping to bring the music to life.

Technically it was a fusion album: Dave Weckl's Master Plan.

Lately, I have been trying to explore new possibilities in Brazilian jazz by writing and performing my own music.

I am left handed but play a right handed drum set configuration. My first drum teacher never asked me whether I was right or left handed until a year into lessons. And he did because he saw me writing something down with my left hand. When he noticed, he said, "Why didn't you tell me before?! We could have been working on a whole different style of playing!" To which I replied, "I didn't know... I didn't know anything about drums!" In a way I am grateful I play a regular right handed set up. It is particularly helpful when sitting in on jam sessions or on someone else's drums since most drummers are right handed.

Recordings you are listening to now:

I always listen to classical music and jazz. Recently, I rediscovered my love for metal and I have been listening to Jinjer. What attracts me to that style of music is its complexity, virtuosic level of musicianship and constant evolution by exploring new possibilities (which is parallel to what jazz does...).

Transitional as some of the giants retire or, unfortunately, pass away. It seems festivals and agents are open to working with new, upcoming artists but it also seems the definition of jazz is getting very watered down in certain cases.

Give young artists a chance!

Continue to promote my new album (Five Roads); working on next album; constantly working on getting the group on the road and moving forward in my career (biggest challenge).

That I will make a mistake.

Normally I don't whistle or sing. But there's a constant radio station playing through and analyzing tons of music in my head.

Private drum set teacher (30 students average) at Hunterdon Academy of the Arts and Paraprofessional at the West Orange High School.

I would have dinner with Beethoven. In my opinion, he is one of the most important figures in music. It would be fascinating to pick his brain on composing and performing music and life in general. He pushed so many envelopes at once and is responsible for one of my favorite periods in music: The Romantic Era.

If you could attend any concert in history, which one would you go to?

I would choose to see the last time Buddy Rich played drums in public.