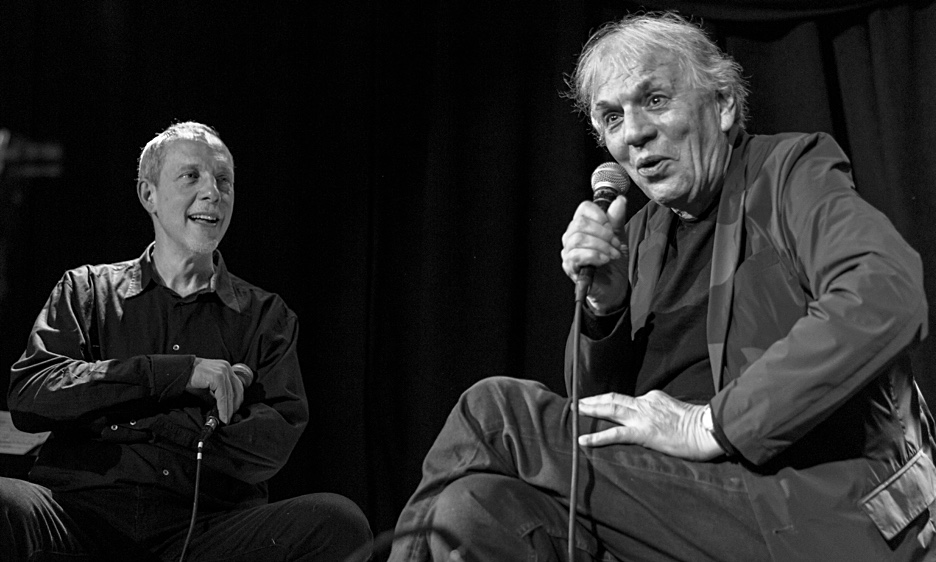 Since its old space closed its doors, John Zorn has been spreading The Stone out into other locations, besides its current main home at The New School. One of these alternative platforms is at National Sawdust, in Williamsburg, Brooklyn, where Zorn programmes a monthly commissioning series, inviting artists to present specially penned works.

This guitaring bill opened with a solo set from Ava Mendoza, who has now fully established herself on the New York scene, following a move from California almost a decade ago. The second half added Nels Cline, himself also a transplant to NYC from Californian parts. This twosome are natural peas in a pod, both heavily concerned with axe distressing sounds, both burnt by effects pedals, distorted and heavy, scarred and intricate.

Mendoza had some small bells suspended, to add subtle resonances to her lines, as she drew out bassy scrawls, opened out by her whammy bar, emitting surges of tightly controlled feedback tone-layers. She made doom-scribbles, twinning prog and post rock vocabularies, razoring, dragging out howls, spraying spiral washes. A tolling weight hinted at what can only be designated as Middle Eastern hillbilly surf, in a decelerated Dick Dale wave-motion. A Trevor Dunn work followed Devin Hoff's "Despite The Obvious Exceptions," titled "Ampulex Compressa," its curt, spiky phrases accumulating into a gloriously incontinent rush.

Following a short break, Mendoza returned with Cline in tow, a man who easily topped Ava's comparatively modest collection of effects pedals. Nels has so many boxes that he keeps the overspill on a piano stool, using both toes and fingers to dance over his controls. Mendoza and Cline aimed for filigree duality, stitching along the interstices, making a swift hike to hard-strumming strafes and whammying howls. Both guitarists have fine rock'n'roll stances, with boots and angled legs. They entered an abstract chamber, with screwdrivers, and warbling, below the pickups, Cline hoisting his red 12-string to fully develop a cosmic climax. The two of them were improvising, but worked in a new composition apiece, neither yet titled. They share compatible style influences, emerging more out of rock and noise than jazz, although that's in the tone, surface and volume, as improvisatory investigations remained paramount in the makings.

These two gigs would have been best experienced the other way around, as it was initially difficult to settle back down into Ralph Towner's delicately acoustic realm, following all of the electrified frazzle of Mendoza and Cline. Towner sat on a chair, his guitar cocked upwards, in flamenco fashion, the audience completely bathed in his sonic charms. It was refreshing to view just a single microphone, angled towards his soundhole. Towner's touch is very soft, with much articulation dependent upon varying degrees of attack, pressure and alternating finger contact. He paid tribute to John Abercrombie, with "Ralph's Piano Waltz," by the fellow guitarist, and then his own "Blues As In Bley," itself a dedication penned following the departure of pianist Paul. Calm reflection and tasteful introversion dominated this second set at the Jazz Standard club, which was presented as part of Joel Harrison's Alternative Guitar Summit #9.