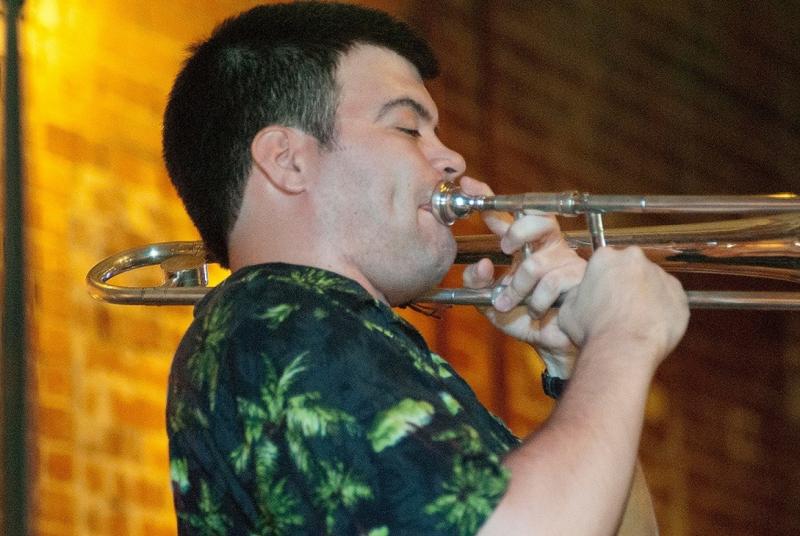 Jay was also the lead trombonist with the Keystone Society of Swing Big Band from 2001-2006, He plays in a trombone quartet called Trombone Chowder, and a five trombone and rhythm section jazz group, Slide Zone. He also played in a jazz sextet, Liquid Jazz, playing original music and standard tunes.

Currently he plays in a quartet of trombone, guitar, bass and drums and in a big band, Zeropoint, playing the solo trombone book. He also has smaller groups, a jazz trio of trombone, organ, drums that has played at Lewisburg Live, Raystown Lake Amphitheater, and South Hills Business School Summer Concert Series. He has a duo of trombone and guitar, or trombone and keyboard called J-Mac that has played throughout the centre region including many nursing homes and assisted living communities. Jay has also had the privilege of playing with vocalist Catherine Dupuis, pianist Russ Kassoff, bassists Martin Wind, Jay Anderson, David Finck and Jay Leonhart, and drummers Tim Horner and Dennis Mackrel at the Jazz PA Festival from 2005-2010.

Your sound and approach to music:
My music is very strong in melody and rhythm. To me they go hand-in-hand with each other. Harmonic content is also important but for me melody is the key.

Road story: Your best or worst experience:
Coming from a gig in Waynesboro PA in the Fall of 2011. This when the floods were bad in certain areas. We did the gig and decided to come home through Harrisburg PA. Only problem was that every road out of Harrisburg was closed. Probably should have notice that when we were coming into Harrisburg and it was like where the heck is everybody. We ended up backtracking and going home the way we came.

Favorite venue:
Actually I do many nursing home and assisted living community gigs and for the most part everyone really appreciates what you do. The piano is always provided and you usually leave with a feeling of satisfaction that you could put a smile on someone's face.

Your favorite recording in your discography and why?
Carl Fontana, The Great Fontana.

It has everything I mentioned in another question. Melody, rhythm and great vibe.

What do you think is the most important thing you are contributing musically?
Music is to be shared with people. It is not about competition. It is not about being better than someone else. Like I said above, if you can make someone happy for that hour or two that you perform, that is what it is all about.

How would you describe the state of jazz today?
I don't know how to answer this.

I am from a very rural area in PA and my goal is to try and bring this art form to an area that is steeped in country & western and rock 'n' roll. There are some very inspirational jazz artists living in this area and if this is the case for every other region in the US then I think it is a good state.

What are some of the essential requirements to keep jazz alive and growing?
You have to expose it to young people. I am playing for the elder folks who do appreciate this music. Now granted I'm not going in there and playing "Giant Steps." You have to know your audience and do realize that a major part of your job is entertaining. You can find a balance between the creative and entertaining. It is a challenge but can be done.

What is in the near future?
I just finished my new album, Red Pajamas, and was recently featured on a local TV show. In the late summer/early fall I will be recording a one-hour radio broadcast of jazz musicians, celebrating the 40th anniversary of The Palmer Museum on the campus of Penn State University.

Hopefully and round of summer concerts in the park and various festivals in Pennsylvania will be part of the schedule as well.

If I weren't a jazz musician, I would be a:
I worked in a factory for 11 years full-time so probably something in that field. I worked in shipping and receiving for a majority of that time.