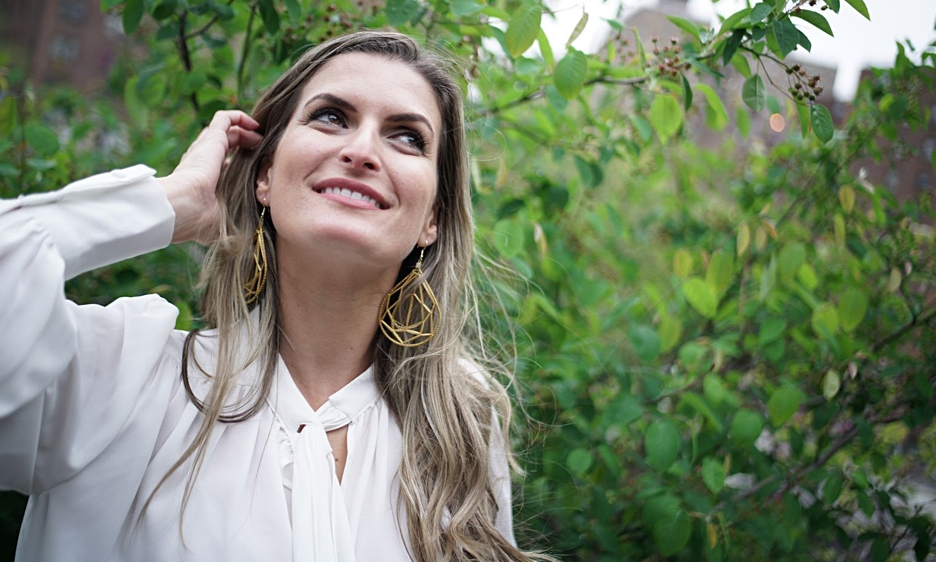 BY DANIELA SOLEDADE
August 29, 2019
Sign in to view read count

Daniela Soledade may initially seem like a fresh name in Brazilian music, but the vocalist's impact immediately strikes a chord as encountered on her debut album, A Moment of You (Blue Line Music Records, 2019). A carefully curated set of Bossa Nova gems (while dodging the most obvious choices), Brazilian-ized standards and original songs, created in partnership with producer/guitarist Nate Najar, the album frames the luminous tone and mature interpretive powers of the singer-singing in both English and Portuguese. A legacy-related back story lends added depth to Soledade's unfolding musical saga—she belongs to a sparkling lineage of great Brazilian artists, ranging from her grandfather Paulo—collaborator with Antonio Carlos Jobim, Vinicius De Moraes, Baden Powell and other Brazilian legends—and her father Paulinho, who has worked as producer and partner with Ivan Lins and Gilberto Gil.

My father taught me to sing from a very young age. He is a professional musician, producer, composer, and arranger. He also taught me a lot about playing the guitar. I hung out with very musical friends in Rio, so I learned about playing songs on the guitar with many friends as well. I also took classes at the Villa-Lobos Music Conservatory when I was 14, which included classes in voice, flute, theory, history, etc. My sound is heavily influenced by the music I grew up listening in Rio, which is mainly Samba, Bossa Nova, and MPB. I have influences from several family members from both sides of my family who are/were musicians, and even though I grew up in Rio listening to Samba, Bossa Nova and MPB, I also listened to international artists because my parents would listen to them at home. Some of these artists include Stevie Wonder, Sade, and James Taylor.

When I was a child. I would say at about seven years old, because that's when I started being more involved in music at school, and that's also when I started recording at studios with my father. I recorded songs for TV shows, kid bands, and artists or commercial that needed songs with kids' voices. I loved doing that.

I like a very intimate, conversational sound-almost like a whisper. I love a beautiful melody, harmony with movement and a meaningful lyric. When I perform, I want to create an ephemeral bubble that the audience and the band share for that moment.

I was honored earlier this year to be asked by Chuck Redd to participate in a Charlie Byrd tribute concert at The Mainstay, a wonderful venue in Rock Hall, Md where Charlie used to play often late in his career. The band was fantastic— Chuck on vibes and drums, Tommy Cecil on bass and Nate Najar on guitar. I had never been to the eastern shore before and the scenery was just idyllic. I got to have lunch with some of Charlie Byrd's family members and the day after the gig I visited 49 West in Annapolis, a delicious little cafe where a wonderful artist, Jonathan Stone, plays and sings just like Joao Gilberto. It was perfect!

I love this wonderful theater in Florida, where I live, named the Palladium Theater. It is an early 20th century church that was converted to a performance theater about 20 years ago. They have two venues, an 800 seat hall and a 200 seat club and in both rooms the sound and feeling are exquisite. In addition the audiences there are some of the warmest people an artist could hope to play for.

I like to continue to spread Bossa Nova around the world, because even though it's a genre that was mostly heard in the '60s, it is so very special to me. This music talks about all of the beautiful things in the world, love, relationships, encounters, the sun, the sky, the sea, music, and everything that feels good in the world. In a world where there is so much craziness happening, it's nice to be able to sing about everything that is great in the world—to spread love and happiness.

My grandparents introduced Tom Jobim and Vinicius de Moraes to each other when Vinicius was looking for someone to compose the music for his play "Orfeu Da Conceicão." My grandmother, Lina de Luca, was best friends with Lila De Moraes, Vinicius' wife at the time. That play later became the film Black Orpheus with additional music by Bonfa. The original poster for the play is still hanging in the Copacabana apartment where I grew up!

We have a little tour lined up where we are visiting some great venues and cities including Washington DC, the Blue Note in NY, the Bay Area in CA and some overseas things as well. It is really exciting to be able to spread this music that I love so much.

"I Wish You Love"

I trained as a civil engineer and worked in engineering for a few years straight out of college. It was the "practical path" that young people are often encouraged to follow, but since I grew up playing music, the call was too great to ignore. Engineering did not last long for me and I really cannot see myself doing anything other than music.

Pixinguinha. Because I grew up listening to his music and it would be nice to know about the music scene in the early 1900's in Rio, and some his life experiences. I was born a little too late for that dinner, though.