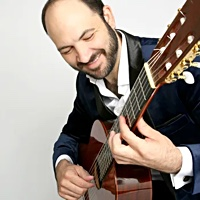 Nate’s playing is quietly spectacular and the sound he gets out of his unamplified guitar is a gorgeous song itself.
—Jazz Lives

An accomplished guitarist-composer and Charlie Byrd devotee, nylon string fingerstyle player Nate Najar has distinguished himself as a talent worthy of recognition with his impressive output over the past ten years. On his latest trio recording, Blues for Night People: The Nate Najar Trio Remembers Charlie Byrd, the Florida-based guitarist pays tribute to an important role model with a collection of tunes either composed by or associated with the late, great guitarist. Najar also performs on Byrd’s own guitar, a 1974 Ramirez 1a nylon string classical guitar, the same guitar Andres Segovia used.

Accompanied by the veteran D.C.-based rhythm tandem of drummer Chuck Redd and bassist Tommy Cecil, Najar runs the gamut from alluring bossas and romantic ballads to urgent swingers and delicate, classically influenced numbers on his sixth outing as a leader. The chemistry and interplay throughout is apparent. These three kindred spirits are truly on one accord on this auspicious outing. “To me, it feels like there’s three of us playing together and not me just playing on top of a rhythm section,” says Nate. “And when you’re playing with guys that good, why would you do it any other way?”

The trio opens with Najar’s fresh arrangement of Byrd’s “Blues for Night People,” title track of the great guitarist’s 1957 Savoy album. Najar’s version shifts nimbly from hard-hitting funk to an insistent shuffle-swing groove, with the leader showcasing his beautiful warm tone and fluid chops along the way. “It’s really a suite that takes up the whole side of a record,” he explains. “What we played is the main theme from the last part of the suite. Chuck and I came up with the tempo change and different feels.”

Nate’s classical influences come to the fore on a crystalline interpretation “Django,” John Lewis’ delicate, introspective composition written for the Modern Jazz Quartet and which Byrd recorded on his 1960 Riverside release, The Guitar Artistry of Charlie Byrd. Najar showcases some remarkable contrapuntal playing on this lovely piece. “I had originally written that as two separate parts — the eighth note thing for me to play and Chuck was to play the melody on vibes. And we did record that arrangement on an earlier album. But I wanted to start playing it with the trio so I had to figure out how to play both parts myself.”

On Antonio Carlos Jobim’s “Desafinado,” which Byrd recorded numerous times throughout his career, most notably with Stan Getz on the groundbreaking 1962 album, Jazz Samba, they fly through the familiar tune with aplomb. Redd’s brisk brushwork sets the tone and Cecil turns in a deep-toned melodic bass solo while Najar delivers a brilliant single note barrage on this lively samba. Redd switches to vibes on a faithful version of the bluesy, subdued “Swing 59,” Byrd’s 1959 tribute to Gypsy jazz guitar legend Django Reinhardt, which features stellar solos from all the members of the trio. Redd remains on vibes for Joao Gilberto’s “O Pato,” which also appeared on Jazz Samba. Cecil’s resounding bass lines anchor this lively samba, which makes it that much more exhilarating when he drops out and lets the vibes and guitar engage in a spirited conversation.

Najar’s solo introspection on Duke Ellington’s “Single Petal of a Rose” provides some of the more sublime moments of the session while his rendition of Joaquin Rodrigo’s “Concierto De Aranjuez” is underscored by a sense of drama and haunting beauty, with bassist Cecil taking a prominent role with the melody, alternating with Nate’s profound nylon string statements. A relaxed rendition of Richard Rogers’ “Have You Met Miss Jones” has Redd supplying some alluring brushwork, then the trio burns through an uptempo take on “Who Cares,” which Byrd recorded on 1962’s Mr. Guitar. “I pride myself on doing my own arrangements and putting my own stamp on tunes, but that’s Charlie’s arrangement all the way,” he says of that Gershwin tune. “My voicings are a little different but that tempo and the basic idea is what he did on his record.”

The trio luxuriates on Jobim’s “Someone to Light Up My Life,” which appeared on 1965’s Brazilian Byrd, then they strike a gentle accord on Sidney Bechet’s romantic “Si Tu Vois Ma Mere (I Remember When),” which Byrd included on one of his last recordings, 1994’s Moments Like This. “It’s such a great, pure tune,” says the guitarist of the Bechet composition, which Woody Allen used as a thematic device in his recent Oscar-winning movie, Midnight in Paris. “You almost don’t want to mess with it; just play it straight down. Don’t ruin the melody.” They conclude the collection with Najar’s tender bossa nova “Remembering Charlie Byrd,” a fitting tribute to his biggest influence to date.

Growing up in St. Petersburg, Najar studied guitar from age 17 through his 20s. He made a major leap in his development after hooking up with Frank Mullen, who like Byrd had been a disciple of renowned D.C classical guitar teacher Sophocles Papas. Frank had moved down to Florida in the early ‘70s,” Najar recalls. “He played the classical guitar a lot in our lessons and he had told me to get one. And when I started playing it I thought, ‘Wow, this is so much better than that other thing.’ So the more I learned how to play with Frank, the more I discovered that fingerstyle playing on the classical guitar is much more piano-like.” Byrd became an obvious source of inspiration for him in his developmental years.

“Charlie was my guy,” says the 30-year-old guitarist, who also cites Gene Bertoncini and Romero Lubambo as influences. “I knew Charlie’s records, I loved his sound. It was something that was really special to me. There was just this elegant simplicity in his playing; it always seemed like just the right way to do it.”

While Najar may be coming out of the Charlie Byrd tradition, he’s got his own unique place in the lineage of nylon string fingerstyle jazz guitar. “I’m trying to come out of a classical thing. Charlie came out of a classical thing when he was younger. As he got older, he wasn’t playing classical repertoire as much, although he practiced a lot. But Charlie was a helluva classical player when he was younger. I’m coming out of that, trying to approach the classical guitar with the repertoire. Most of my practice these days is trying to do the Julian Bream thing. Tone production is something I’m working on now. And I’m making a big effort to do it as the classical guys do it…because that technique really makes the guitar a piano in your lap, if you’ve got your fingers really happening properly.”

Najar’s other recordings include Swinging with the Nate Najar Quartet, I’m All Smiles, Live at the Side Door, Until Now and Christmas with the Nate Najar Trio. In a very different context than his nylon string fingerstyle jazz work, he scored a Top Ten hit in 2011 with the R&B tune “Groove Me,” featuring vocalist Melba Moore. Najar has performed frequently with his trio at Blues Alley in Washington D.C. and in 2008 was invited by Dr. Billy Taylor to perform at the prestigious Kennedy Center in an evening celebrating the historic Showboat Lounge, a one-time landmark on the D.C. jazz scene. Show less

In the holiday spirit, jazz style.

A sultry celebration of Jobim, mostly

Vibraphonist Chuck Redd to appear with the Nate Najar Trio

All About Jazz musician pages are maintained by musicians, publicists and trusted members like you. Interested? Tell us why you would like to improve the Nate Najar musician page.