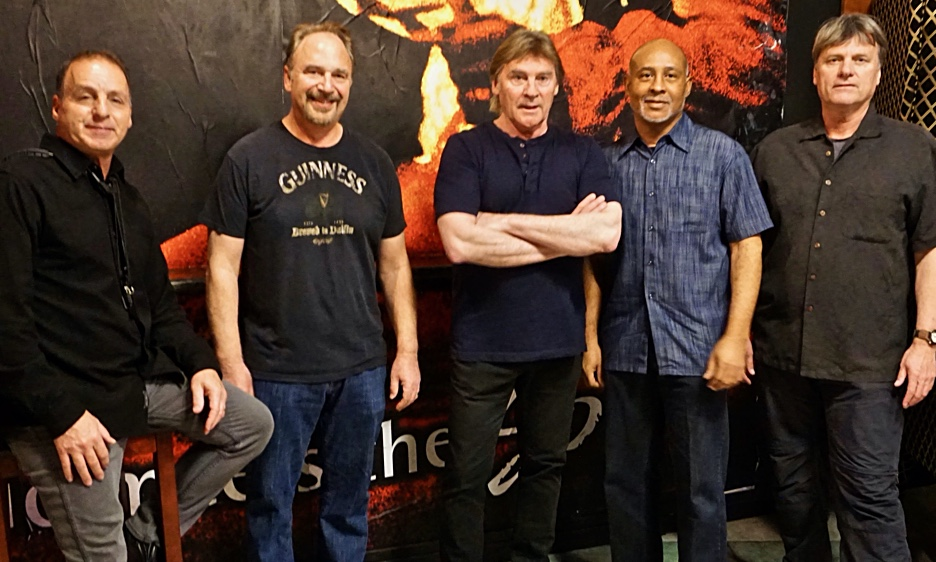 By AAJ Staff
September 9, 2020
Sign in to view read count

Founded and brought together by brothers Pete and Phil Templer, guitarist/composer and drummer/percussionist/composer respectively, the goal was to establish a creative and engaging environment to present a dynamic musical experience to audiences of all types.

Pete and Phil both hail from the Midwest where they began their musical journey studying and playing in a variety of venues at early ages. Both enrolled in various musical colleges; Pete studied at Berklee and University of Miami under Jerry Coker. Together and separately they have played many different styles of music and venues throughout the U.S. before relocating on the West Coast, first in the Bay Area and then in the L.A. area.

Phil utilizes both DW and Yamaha acoustic drum kits as well as Roland electronic percussion modules in his setup.

Phil: For me Gaeton Caviola, a protégé of Louis Bellson was an early influence and teacher. Other influences (to name a few) would be: Ginger Baker, The Motown Studio drummers, Art Blakey, Buddy Rich, Billy Cobham, Tony Williams, Bill Bruford... I could go on.

Phil: It was just something I gravitated to. Just about everyone in our family played music in some fashion. I have always loved music and wanted to be a part of the music making experience.

Pete: Watching my older brother rehearse with his rock band in our basement. He gave me my first guitar and showed me the basics before taking formal lessons

Phil: My approach to drumming has been to be more than just a timekeeper for the band. I understand that this, at times, has been in conflict to others' opinions of what a drummer should be, but I wanted to be involved in the compositions and performances in other ways too. Also, I have been experimenting and using electronic percussion for many years and have always tried to have an open mind as to what can be utilized for percussion sounds.

Pete: It's all about melodic composition. The composition dictates my sound be it overdrive guitar, acoustic guitar or inspirational sounds driven by my various electronic devices. My diverse influences are reflected throughout our compositions.

Pete: Having taught all ages privately and in music schools my approach depended upon the student's experience, starting with the basics and on up to mastering the fingerboard with the seven finger patterns and their respective modes and how they apply to improvising.

Phil: Hey, the current AXIOM is more that just a dream band; it is a reality band. These guys are absolutely dedicated and extremely talented. What more could we ask for?

Playing for the Dali Lama in Santa Cruz was a great experience. There were a lot of tough road gigs early on. We always tried to avoid staying at the "Band House"

The Saban Theater in Beverly Hills is a classic grand old theater with great acoustics. We did shows there with Larry Carlton and Jon Anderson of YES and had a great time on both occasions.

As a band we are continuing to try and create new compositions that push Progressive and Fusion Jazz/Rock sounds forward rather than just looking backward. I hate genre labels though. I think too much time really is spent on looking back at older compositions rather than looking forward and creating new ones. I think this is true for most genres these days,

Phil: I love to spend time outdoors in the mountains and have done a fairly significant amount of backpacking including the John Muir Trail in the Sierras.

Phil: The first jazz albums I really listened to were Miles Davis' Bitches Brew and Quincy Jones Walking in Space.

Pete: I'm not focusing on any particular artist/album but am trying stay up on current contributions to the contemporary jazz fusion genre as well as revisiting the classics; too numerous to mention.

Phil: Simon Phillips: Protocol 4. I recently watched (and listened) to some old videos of the R&B bands of the '70s (Spinners, Earth Wind and Fire, Temptations etc.) They were great although the shows seem pretty corny, but the songs were really memorable and those harmonies...

Also, Ray Lyon's Beginning to See. I like some of the things Ray Lyon has done. He is a fairly unknown artist but the compositions are really compelling. Chick Webb— I always like to spend some time listening to the guys who started it all

Like so many genres, it seems like it is at another crossroads and is trying to figure out how to encourage younger people to listen and to stay relevant, not just in a nostalgic fashion. Jazz can't just rely on the renditions of old jazz standards to accomplish this. These will always have a place, but I have always thought Miles' attitude was the best way forward. Don't look back, always push forward.

The Pandemic has presented enormous performance challenges. We, like everyone else, have had many show opportunities canceled with re-bookings tentative at best. We have just released our latest album, Starburst, but also have compositions for a new project. We are also planning for some streaming events.

Phil: Well that's pretty simple. Will we get it right? Will the audience be receptive? And hopefully there are no technical problems

Phil: How about Return to Forever's "No Mystery" or on second thought, maybe Stevie Wonder's "Don't You Worry Bout a Thing."

Phil: Lately it's been "The World is a Ghetto. Not exactly sure why but there it is.

Phil: I got interested in Programming in the early nineties and Pete and I got involved with a software company pioneer that has provided pretty steady revenue and at the same time enabled us to continue our musical adventures.

Phil: How about Marco Polo? A truly great adventurer and someone who was interested in other cultures.

Pete: Leonardo Da Vinci: He would have been a fascinating conversationalist on many topics.