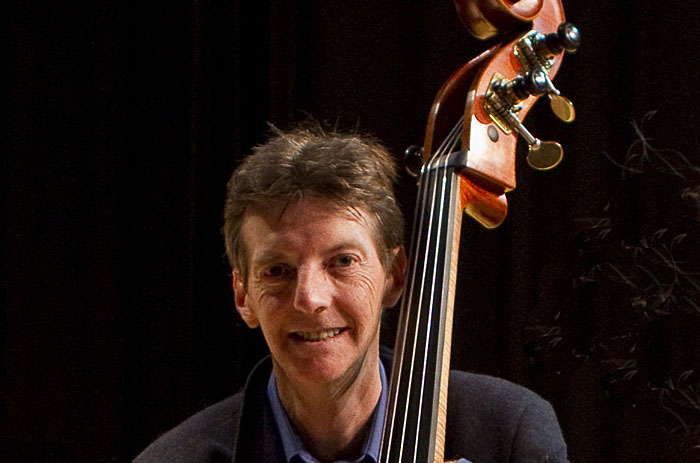 By ANDREW M. READ
October 28, 2010
Sign in to view read count
Meet Andrew Read:
I studied double-bass at the Victorian college of the Arts in Melbourne, Australia. After leaving the college I worked with a number of prominent Australian pop and jazz artists including, among others, Vince Jones, Ricky May, Brave Men and Perfect Strangers. After the tragic death of Perfect Strangers' singer Andy Clayton Smith, Liz and I moved to the Netherlands, where I furthered my studies in classical music with the famous classical solo bassist Hans Roelofsen, at the ArtEZ conservatorium in Arnhem. In 1996, I formed the Andrew Read Trio that would become my main vehicle for my compositions.

Together with drummer Erik Poorterman and pianist Hans Kwakkernaat, the Trio has produced a number of CDs and performed throughout Europe. In addition to the trio I have worked as a sideman with a number of international touring artists including, among others, Elvis Costello, Toni Braxton and Milt Jackson.

I am also very active in the classical world, where I specialize in the performance of early music. I work with numerous early music ensembles in the Netherlands and Germany and, up until 2009, was the founder and musical director of the well-known Dutch baroque orchestra, Il Concerto Barocco.

Teachers and/or influences?
Well, where do I begin? I remember my dad playing Miles Davis' Kind of Blue, when I was a kid. This had a great impact on me, especially Paul Chambers' intro to "So What." It was also through this album that I discovered Bill Evans. I went straight out grabbed a copy of Explorations; this was my first encounter with Scott LaFaro. This was it; I got hold of a cheap double-bass from a local music shop and have never looked back.

I have studied with many teachers over the years, while I learned a great deal from all of them, a few stand out as having a huge impact on development as a musician.

My first teacher was the late and great Australian bassist Gary Costello. Gary was an inspiring teacher and gave me a deep respect for tradition, his motto was "how can you know where you are going if you don't know where you came from." While many players were focusing back then on Niels-Henning Orsted Pedersen and Eddie Gomez, Gary had me transcribing lines from Oscar Pettiford and Jimmy Blanton.

The other teacher that had a big impact on me was Hans Roelofsen. I studied with Hans after moving to the Netherlands in 1993. Hans is one of the few internationally known classical bass soloists. Not only did Hans have a big impact on my technique but he introduced me to early classical music from the renaissance and baroque periods.

I knew I wanted to be a musician when...
To be honest, I don't think I had a great deal of choice in the matter. I came from a musical household and, in some way, I guess it was just expected that I would become a musician. I know it's the horror of most parents when their child announces that they want to become a musician; however, this was not the case for me, my parents were more than supportive and encouraged me to follow my dream, no matter what. Although it's not the easiest path to take, I have been playing bass professionally now for more than 30 years and have no regrets.

Your sound and approach to music:
My approach to music is rather simple and can be summed up in the words of Duke Ellington: "It don't mean a thing if it ain't got that swing." This probably sounds a bit esoteric, and applies to all music styles; it goes far deeper than just good timing. Music is energy: onstage, this energy is multiplied when players understand this principle and open up to what's going on around them. This is the magic of jazz. Regarding my sound, I have been searching for years for the perfect sound and still haven't found it, the goal posts keep moving, and I wonder if I will ever find it. Maybe this is the lot of a musician, or more likely, I have already found it and just don't know it.

Your favorite recording in your discography and why?
I think this would have to be my new CD, J.S.B., that is planned for release this coming November. Charles Mingus once said "Making the simple complicated is commonplace; making the complicated simple, that's creativity." This tends to describe the philosophy for the CD. The majority of the original compositions on the CD are based on the chord changes from well-known works taken from the classical repertoire.

One thing I can assure you is that this program is nothing like the old "Bach meets Jazz" idea. If there is one thing I hate, it's that. For these pieces, we applied the same concept used during the bebop era, where new melodies were applied to existing chord progressions. The major difference is that instead of sourcing our chord changes from songs out of the American songbook tradition, we opted to explore the European classical music tradition for our harmony. For example we have taken the changes from Samuel Barber's "Adagio for Strings," and made a bossa out of it. I would challenge anyone to pick the changes (maybe this is a good marketing stunt).

The first Jazz album I bought was:
Explorations, by the Bill Evans Trio on Riverside records. For other desert island recordings I would have to list Kind of Blue, by Miles, Jim Hall Live (recorded by bassist Don Thompson in Toronto, 1975), and Leonard Bernstein's recordings of the Mahler Symphonies.