Don (Donald Winston) Thompson. Pianist, bassist, vibraphonist, drummer, composer, arranger, recording engineer, b Powell River, north of Vancouver, 18 Jan 1940. After childhood piano lessons he took up the string bass and the vibraphone in his teens. He is essentially self-taught on all instruments. In Vancouver 1960-5 he was sideman to Chris Gage (playing bass or vibraphone) and Dave Robbins (bass) and accompanied the visiting US jazzmen Barney Kessel, John Handy, and others in local nightclubs. With the drummer Terry Clarke he joined Handy's quintet in the USA in 1965, touring widely and making two LPs, one of which, Live at Monterey, was among the most popular jazz recordings of the 1960s. Thompson returned to Vancouver in 1967 (after working briefly in Montreal with Lee Gagnon that year) and then moved to Toronto in 1969 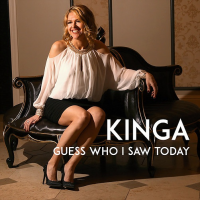 Guess Who I Saw Today, the latest album release from Canadian rising star vocalist Kinga, is available now! Kinga has long been a favorite in Canada and recently signed with Arena Jazz, a division of jny: Seattle-based Arena Music Promotion, to produce and release her groundbreaking album worldwide. “Guess Who I Saw Today" features elegantly tailored ...

Jim Hall: Live, Now and Then

[ This interview was originally published on July 16, 2013. ] Widely acknowledged as one of the most influential guitarists in modern jazz, Jim Hall has had an extraordinary musical career that spans more than half a century. His style is marked not by soaring speed or virtuoso technique but by his explorative artistry ...