By John Kelman
February 6, 2011
Sign in to view read count 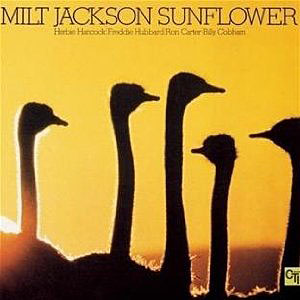 With a series of mainstream dates to his credit dating back to the early 1950s—not to mention charter membership in the now-legendary Modern Jazz Quartet (MJQ) and one-offs with everyone from bop saxophonist Charlie Parker to "new thing" saxophonist John Coltrane—vibraphonist Milt Jackson was the clear link between his instrument's swing era beginnings with Lionel Hampton and more progressive things to come with then-relative youngsters Gary Burton and Bobby Hutcherson. Still—and despite the label's centrist-leaning proclivities on one hand, balancing out its more groove-centric tendencies on the other— Jackson's signing with CTI Records was something of a surprise, as was his first project, Cherry (1972), an uneven collaboration with label-hit Stanley Turrentine. His first release for the label as a full-out leader, 1972's Sunflower fares much better, even with the presence of Don Sebesky, an arranger who brought out some of the worst of CTI's easy listening tendencies, but, equally, delivered some tremendously inventive and tasteful orchestral work.

Here, with a harpist and 11-piece string ensemble, Sebesky gives Jackson's opening ballad, "For Someone in Love," a burnished sheen, but it can't take away from the vibraphonist's ethereal touch, flugelhornist Freddie Hubbard's more propulsive approach, or pianist Hancock's abstract impressionism; all making for a stunning intro to an album that posits Jackson in even broader contexts than his discography to date.

What was, back in the day, side one of Sunflower was, then, a bit of a shift for Jackson into more accessible territory, but nothing earth-shattering. Tectonic plates didn't move for those who put on side two of the disc, either, but opening with The Stylistics' oft-covered hit, "People Make the World Go Round,"was something new, as the vibraphonist entered light funk territory. Carter, locked-in with drummer Billy Cobham, proves that, at a time when electric bassists like Stanley Clarke and Alphonso Johnson were on the cusp of becoming fusion stars with Return to Forever and Weather Report, the acoustic bass was still the absolute funkiest low-end instrument of all. Hubbard's closing title track is also a foray into light Latin music, with a soft string cushion broadening the soundscape when the tune moves into double-time during Hubbard's plangent solo.

For Someone in Love; What Are You Doing the Rest of Your Life?; People Make the World Go Round; Sunflower; SKJ (Bonus Track).