By Karl Ackermann
September 16, 2018
Sign in to view read count 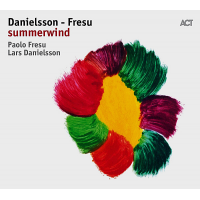 ACT Music brings together a pair of virtuosos in Lars Danielsson and Paolo Fresu, for the duo outing Summerwind. Both are well-known for their melodic and expressive playing as well as an innate gift for spontaneity. Recorded in the Swedish seaport city of Gothenburg, in early 2018, the album incorporates elements of folk, classical and jazz music in a relaxed setting.

Bassist and cellist Lars Danielsson has been a staple of the ACT label for more than ten years and across ten albums. Among his partners on those collections are Tigran Hamasyan, Magnus Ostrom, Arve Henriksen, Mathias Eick, Bugge Wesseltoft, and Nils Petter Molvaer. The Swedish composer and producer came onto the scene with New Hands (Dragon Records, 1986), in his namesake quartet, featuring Dave Liebman, Bobo Stenson and Jon Christensen. Over almost twenty years that group has provided Danielsson with a platform from which he has expanded his work to symphony orchestra and big band formats.

Trumpeter Paolo Fresu first came to the attention of audiences in the US with Carla Bley on The Lost Chords Find Paolo Fresu (ECM/Watt, 2007) though he had been leading his own quintet in Italy since his 1985 leader debut Ostinato (Splasc(h)). The Sardinia native graduated from the Conservatory of Cagliari in 1984, and went on to teach at the Siena Jazz National Seminars, and the jazz university in Terni. He is the director of Nuoro Jazz Seminars in Nuoro, Italy.

Most of the fifteen compact tracks are original compositions—eleven from Danielsson and/or Fresu, including the real-time improvisation "Dardusó." Swedish composer Oskar Lindberg, Krzysztof Komeda and Johann Sebastian Bach provide the eclectic assortment of cover material. Opening with "Autumn Leaves" the duo establishes a pattern of patiently developing some profoundly melodic tunes. Four tracks in, Danielsson's "Stilla Storm" breaks loose with a more upbeat and animated wrap-up. The Oskar Lindberg contribution—"Jag lyfter ögat mot himmelen"—maintains that more buoyant atmosphere which then takes a decidedly different tone with Fresu's noir-ish, but all-to-brief "Drexciya." The trumpeter takes a thoughtful approach to Komeda's "Sleep Safe And Warm," a piece that came to be identified with Tomasz Stanko. Danielsson's arrangement of Bach's "Wachet auf, ruft uns die Stimme" gives the piece a nice updating without losing the original texture.

Despite the duo formation, Danielsson and Fresu often manage to evoke a sweeping sound; full and resounding even in its most fleeting narrations. There is an overall laidback nature that saturates Summerwind but through the tranquility a subtle heat keeps things energized. The spartan album is a showcase for the first-class talents of Danielsson and Fresu.