BY JEROME WILSON
April 2, 2019
Sign in to view read count 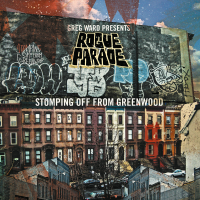 On this CD saxophonist Greg Ward presents a new group, Rogue Parade, which features a front line with two guitarists, Matt Gold and Dave Miller, alongside Ward's alto. Such a configuration, combined with the graffiti-covered walls on the CD cover, suggests this band might work the slippery, interlocking street-funk path explored by Steve Coleman's groups with similar instrumentation. That style is present here, but it's just one of many utilized by Ward and his band .

"Metropolis" and "The Contender" are the two tracks that use the fast-stepping beats and choppy guitar rhythms the most, but they don't stay in that vein all the way through. On "The Contender" Ward's alto slides and wriggles like Charlie Parker through a relentless rhythm groove before the guitars take individual turns at slick, angular string-pulling. Meanwhile, on "Metropolis," one guitarist (who plays where is not identified) keeps pace with Ward's acrobatic lines while the other percolates a Morse code funk rhythm before the entire piece explodes into a dreamy wall of trebly guitar washes that back up Ward's singing sax.

Other compositions create more complex atmospheres. "The Fourth Reverie" is a ghostly jumble of echoing guitar twangs, muffled percussion, electronic moans and ghostly alto which twists and turns until it comes to resemble Joe Zawinul's classic tune, "In A Silent Way." "Let Him Live" is a mechanical, funk-rock groove that allows Quin Kirchner's intricate drum patterns to shine against short, repeated chords of guitar and alto. A version of Hoagy Carmichael's "Stardust" marries a sweet, jazzy lead guitar sound to a chugging African rhythm while Ward's alto keens above the fray.

Bassist Matt Ulery starts "Black Woods" with grumbling plucked bass before his bow-work leads the entire group into a heavy Slavic melody featuring a low-slung guitar-saxophone pairing which suggests Bill Frisell and Joe Lovano working together. Then the guitar work gets more ornate, the tempo picks up and the piece changes into a breezy jazz-rock blow with Gold and Miller spiraling off Ward's howls like they were Jerry Garcia or Duane Allman in full flight. On "Pitch Black Promenade," billowing guitars engulf Ward's singing alto, then take turns rolling out gossamer-light lines before Ward slowly seeps back in and gives the music a balmy island tang. "Sundown" continues this soothing feeling with an ambient fog of lyrical, trembling guitar which resembles the great British rock player Hank Marvin, hardening into tropical-flavored prog rock with Ward's alto toughening the mix.

In Rogue Parade, Greg Ward uses the sound of two guitarists in various jazz and rock modes to create interesting and unique sounds. His results may be not "jazz" in the usual sense, but they do make for a creative blending of genres and styles that results in fresh and intriguing music.