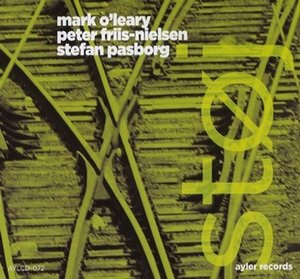 In the aptly named Guerilla Series, for Ayler Records, this trio does, indeed, fight a "little war," recording this limited release (400 copies) as a hit-and-run ambush of destruction and noise.

Støj is quite surprising for O'Leary, whose previous outings found him detailing more muted sounds with the likes of Supersilent on St. Fin Barre's (Leo, 2009), Tomasz Stanko on Levitation (Leo, 2005), and Cuong Vu on Waiting (Leo, 2007). Here, the Irish guitarist teams with the Scandinavian duo of Stefan Pasborg and Peter Friis-Nielsen, a tipoff that this album will comprise sabotage and surprise. Drummer Pasborg (the leader of the Odessa 5 and Ibrahim Electric) and bassist Friis-Nielsen, have been heard on several hardcore Peter Brötzmann sessions, including Medicina (Atavistic, 2004) and Live At Neferiti (Ayler, 1999).

The route chosen here is fast and loud. The album opens with the befitting brief track, "First Tune." O'Leary fires off swift, crisp notes over Pasborg's feverish drumming and Friis-Nielsen's thunderous bass. The trio plays with a cathartic passion, displaying speed and a sort of controlled tumult. The aptly named "Kinetic" follows up with even more speed. This trio could rival any metal band, except they also nterject bits of free music into this tornado of a recording. The title track darts and dodges, with Pasborg mixing the pulse and O'Leary ramping up the intensity.

The trio establishes a pattern of either short intensity, or longer tracks that build ferocity as the music progresses. What maintains attention here is the band's ability to inject passion into both a sliced-up bebop pulse from Pasborg's bass on "Exit," and the slogging thunder of "Interference," that switches with a boom into rock-n-roll. From note one, this is a take no prisoners outing.