BY JAMES FLEMING
December 27, 2018
Sign in to view read count 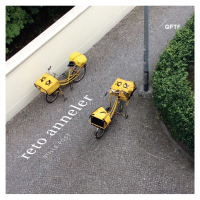 Stille Post is a record as spacious as a solar system. Reto Anneler's alto and Cristoph Grab's tenor move around the rhythm section like planets orbiting a distant sun. And when the two horns align, the music glows with the red light of an eclipse, shining down on the spare basslines and pointed drumming of Claudio Strüby and Lukas Traxel. Who seem to capture the rhythms rather than mould them. And then lay them out like faded tracks for the saxophones to walk.

The horns invoke the ghosts of Ornette Coleman and Don Cherry. Anneler and Grab weave in and out of each other like streams of smoke, an art Coleman and Cherry had mastered. On "Cuche" their solos overlap as if they were politicians debating across a parliament's floor. While on following track "Etwas Kuerzer," Grab's ghostly tenor supports Anneler's alto solo as he plays with the clearness of sharpened prose. His style sings somewhere between the attack of Charlie Parker and the lyricism of Paul Desmond. He has clearly drunk Desmond's "dry martini," but he offsets the coolness with bite. While Grab stays in the mid-lower registers, playing with a low, full growl. So that the quartet's sound is open, instead of vacuous.

He does venture upwards. Moving into freer, screeching territory for a thrilling moment on "1&3 Neineineinein" and punching a hole in the heavens on "Befreiungsschlag." Traxel and Strüby stay out of the horns' way. As on "Befreiungsschlag," where Traxel plays a sole, low note beneath the smoky saxophones while Strüby punctuates the beat with sharp smacks on the snare, instead of intruding upon it with fills. As if he were stabbing exclamation points onto a page.

Stille Post is refined and unabashed. It is not ashamed to emote, but does so in an articulate and clear voice. At its wildest the record rushes like whitewater, or bubbles like boiling mercury. As it does on the three tracks titled after the album—"Stille Post 1," "Stille Post 4," and "Stille Post 3." When they descend into weirdness.

Many lesser players would cram this record's space with ideas and hope that some are good. But Reto Anneler's Stille Post are an inspired quartet. So even when they do open the floodgates, their ideas are all excellent. Supposedly, Chet Baker would lay out whenever he ran out of ideas. And stand there trying to impress with only his James Dean looks. But Anneler, Strüby, Traxel, and Grab don't need to hide behind anything. On Stille Post, the polar worlds of coolness and virtuosity align. And the eclipse shines with a wondrous glow.