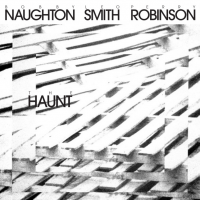 The Lithuanian NoBusiness imprint continues its forensic examination of American 1970s free jazz with the welcome reissue of vibraphonist Bobby Naughton's The Haunt. It's one of his few leadership dates, and originally released on his own Otic label. At the time Naughton was a fixture with trumpeter Wadada Leo Smith's outfits, gracing albums such as Divine Love (ECM, 1979) and Go In Numbers (Black Saint, 1982), as well as performances with Roscoe Mitchell and Anthony Braxton. But he grew so frustrated with the unforgiving life of a creative musician that he quit the scene to all intents and purposes in the mid '80s, surfacing only briefly on Zoar (Otic, 2002) and Pawtucket (Otic, 2013).

Naughton's music here shows many affinities with that of Smith from that period, above all in his generous use of space and overlapping conversational threads. In some ways it echoes the AACM's amalgam of free jazz and contemporary classical, avoiding both extended techniques and fire music tropes. Naughton, who started as a pianist, pursues a distinctive path on the vibraphone, treating it as a predominantly single line instrument, sidestepping the chordal role in favor of timbral variation.

To realize his floating chamber works, Naughton enlists Smith on trumpet alongside Perry Robinson on clarinet. Naughton's melodies are oblique and the overall feel borders on austere, or as austere as you can be with Robinson, a stalwart of the Jazz Composers Orchestra, Gunter Hampel's Galaxie Dream Band and Charlie Haden's Liberation Music Orchestra, on board. The clarinetist spices the give and take with a vocalized human cry. Always up for a blow, he proves loquacious and effortlessly responsive. At this point Smith's deeply personal approach to sound placement is already in place, although his playing abstains from the emotional directness he would later cultivate.

It's a selfless music, based on sensitive interplay which appears to follow an unseen logic, full of dynamic switches, sudden crescendos and passages of quiet delicacy. Brief unisons flicker into existence as if hung by gossamer threads from Naughton's spectral charts as in the ethereal title track. Progress is serene, spanning great open expanses, notably on "Places" where vibe overtones hang in air, intermittently buffeted by clarinet or trumpet flurries.

Naughton in particular comes across as especially without ego. Much of the time his lines seem architectural, shaping and guiding the interchange between Smith and Robinson. It's not until the bittersweet "Ordette" that a sequence of unaccompanied features for each instrument arrive. Even then, so measured are they that they might be structural building blocks, rather than solos in the conventional sense.

The session provides further confirmation, were it needed, that the free jazz of this era was a much more nuanced and multidimensional affair than its critics might suggest. Sadly it also takes on an added poignancy following Robinson's death in December 2018.