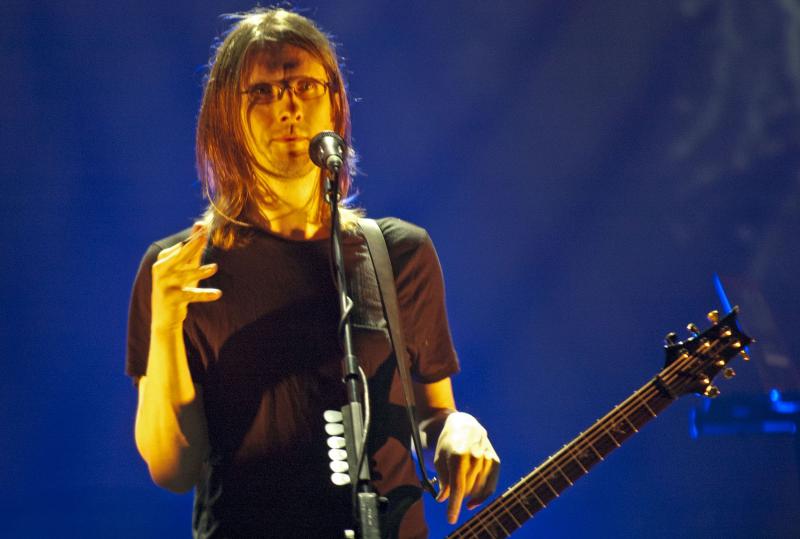 By JOHN KELMAN
November 26, 2011
Sign in to view read count
Steven Wilson
Corona Theatre
Montreal, Canada
November 15, 2011
For many of the mid-Baby Boomer era, the gateway drug to jazz was progressive rock. That's not to suggest that the more structured and, some might say, bombastic environs of late 1960s/early 1970s groups like Yes or Emerson, Lake & Palmer had a whole lot to do with the more spontaneous side of jazz, but there's little doubt—based on albums like King Crimson's Lizard (DGM Live, 1970), where nightmare-inducing mellotrons, and the volume and intensity of rock, were combined with freewheeling contributions from British jazzers like pianist Keith Tippett and trombonist Nick Evans—that the spirit, if not the exact letter, of jazz was at least part of prog's foundation.

When it comes to Steven Wilson—of Porcupine Tree, Bass Communion, No-Man and Blackfield—the Crimson reference is particularly germane to the guitarist/keyboardist/singer's sophomore solo effort, Grace For Drowning (Kscope, 2011). But he's not just a busy songwriter, performer and producer. Based on his superlative ongoing work remixing the Crimson catalog in both stereo and surround sound, in the past couple years, he's also emerged as the "go-to guy" for progressive rockers looking to give their classic material a 21st Century facelift—groups like Caravan and Jethro Tull, with at last one more big prog name in the pipeline—while contemporary groups like Opeth have drawn on his astute ears and unfailing respect for the music on the Swedish group's recent Heritage (Roadrunner, 2011). 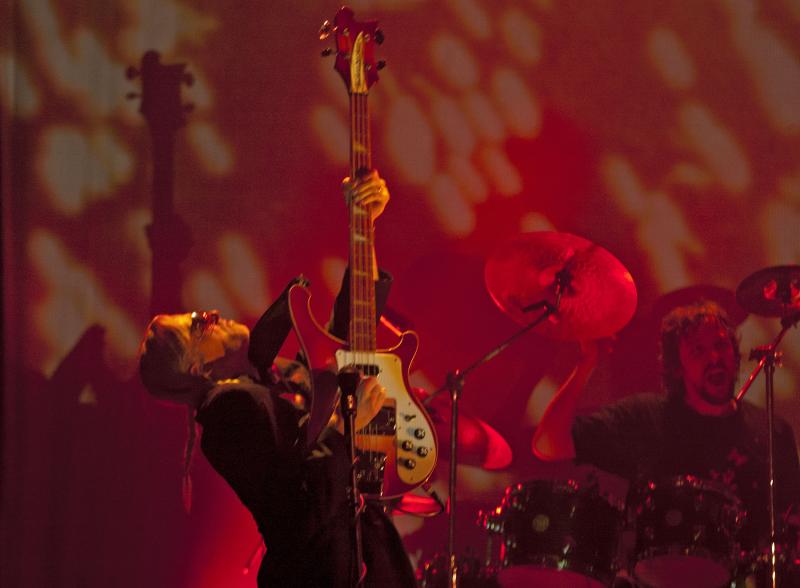 
If Grace for Drowning has any precedent it's in Lizard-era Crimson, albeit with a new-millennium perspective, and Wilson's choice of band mates for his Fall 2011 tour only made the lineage clearer. His Montreal performance at the Corona Theatre, where Wilson played to a house of approximately 800 enthusiastic fans, may have been a solo tour on a smaller scale than his Porcupine Tree tours (his last Montreal date was in front of more than 2,000 people at a larger hall in the city's Place des Arts), but with a group that included saxophonist/flautist/clarinetist Theo Travis, keyboardist Adam Holzman and drummer Marco Minnemann, the bandleader brought plenty of jazz cred to a powerhouse progressive rock sextet that also included bassist Nick Beggs and guitarist John Wesley, and was an eternity away from the symphonic prog of groups like Transatlantic, The Flower Kings and Agents of Mercy.

That said, the heavy sound of mellotron choirs was a signature on the set's closer, a version of Grace's 25-minute "Raider II" that managed to surpass the studio version's transcendent power. Wilson introduced the piece saying that his intention was to create something truly heavy, but that the guitars and drums of metal have, by now, been done to death, so he wanted to try something a little different. If "Raider II" shares certain structural similarities to Lizard's "The Battle of Glass Tears"—with a dark, ominously quiet opening leading to a thunderous middle section, Travis getting some serious flute and saxophone space, and a resolute coda, where guitars coast over a bass ostinato—it was by no means imitative. 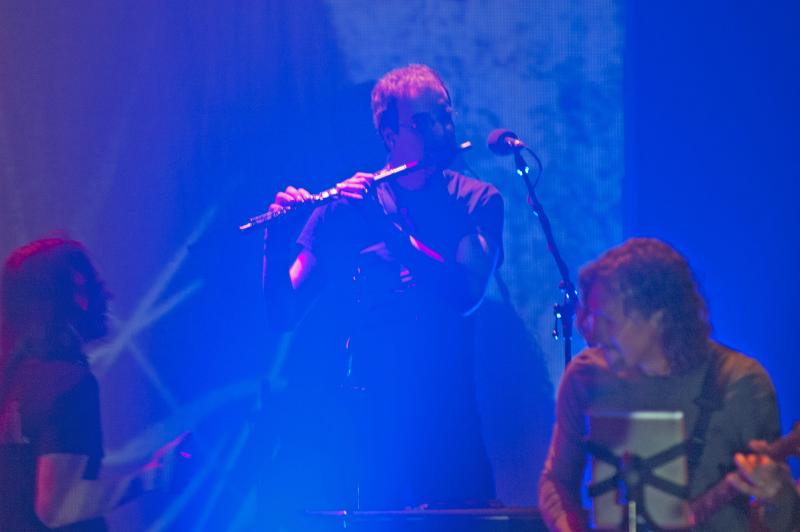 
Focusing on Grace for Drowning for eight of the set's thirteen songs, Wilson also drew liberally from his first solo album, 2009's Insurgentes (Kscope), opening the show (after an hour of gradually shifting rear projection imagery and droning music from Bass Communion slowly rallied the audience) with "No Twilights From the Court of the Sun." Minnemann came onstage first—behind the gauze-like curtain that remained in place for the first four songs—laying down its 21/4 pulse with four-limbed independence that seemed as natural as breathing to the young drum phenom—a perfect marriage of unfailing precision and effortlessly relaxed groove. The rest of the group entered, one at a time—Beggs working the repetitive bass line, Holzman adding ring-modulated electric piano, Travis some flute and Wesley a series of jagged lines—until Wilson appeared, wandering the stage and encouraging/directing the group before taking to the microphone as the group coalesced around him and cranked things up to eleven. 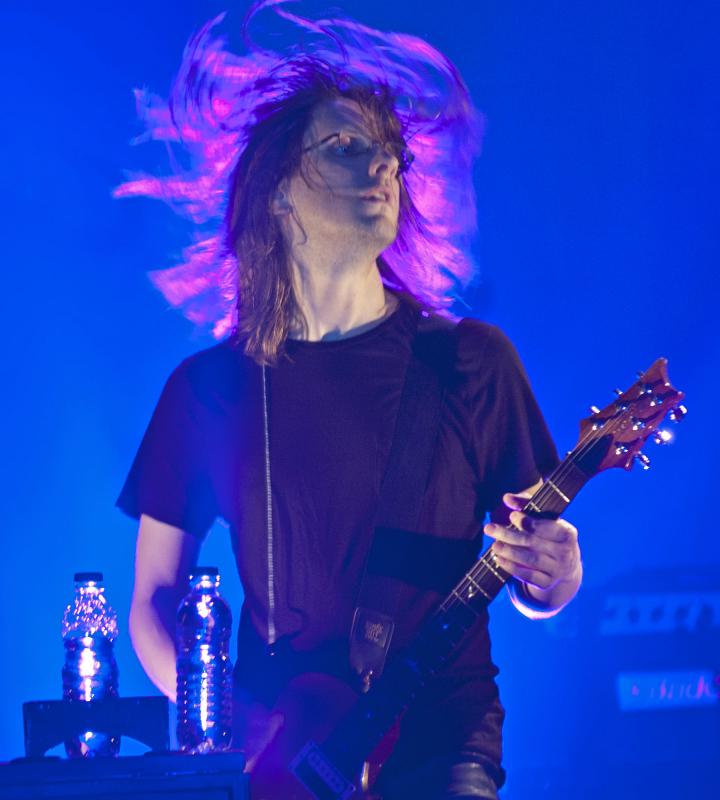 It was, indeed, a loud show, but the sound was remarkably clear, and if there were some nearly ear-bleeding moments—like the Insurgentes encore, "Get All You Deserve," for which Wilson returned to the stage in CD cover's gas mask and built the music from near-silence to an eardrum-shattering climax over an unrelenting layer of white noise emanating from speakers placed at the back of the hall—there was also plenty of respite. Grace's "Deform to Form a Star" is one of Wilson's most flat-out beautiful songs, and live—sporting greater dynamics and fine guitar solos from both Wilson and Wesley—it was an early highlight in a set that never wavered as it moved from high point to high point over the course of two-plus hours.

Whether he was wandering the stage, fixed in front of a center stage microphone with his guitar, or seated and almost invisible behind a keyboard, Wilson remained a charismatic front man who never failed to acknowledge the players around him as, following the encore, each of the band members joined him front and center for an individual bow, their names written across the rear projection screen. The show was absolutely under Wilson's control, but he afforded plenty of flexibility for his mates to bring their own individual voices to his structures and sound worlds, rendering the performance as interpretation rather than duplication. Minnemann was simply stunning, even capturing small figures from the albums, but giving them a personal twist; some were feats of physicality that would have seemed impossible were they not there for the eyes to see. Whether on bass or Stick, Beggs combined his unshakable ear for groove with a virtuosity that, based on his recent touring work with ex-Genesis guitarist Steve Hackett, should have been no surprise, but still came unexpectedly in the middle of "Raider II," where he doubled a relentlessly fast line with Wilson with the same effortless execution as Minnemann.

If Wilson has become the remix "go-to guy," Travis has, in the past decade, emerged as woodwind player of choice for everyone from Gong and The Tangent to Soft Machine Legacy and Crimson's Robert Fripp. While his engaging work in this area has, out of necessity, slowed down the jazz-centric output of solo records like Double Talk (33 Jazz, 2007), his improvising duo with Fripp, last heard on Live at Coventry Garden (Panegyric, 2010) remains an ongoing concern as they prepare a new studio recording (with Wilson mixing for both stereo and 5.1 surround) for release in 2012. Live, Travis makes the case for progressive rock's connection to jazz, his lithe lyricism and soaringly cathartic contributions living in a space where the line between these two genres isn't so much blurred as non-existent. 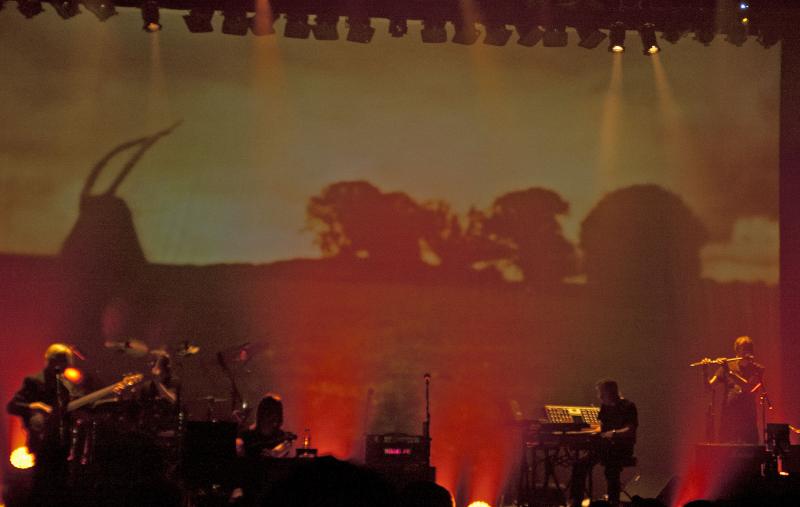 
Despite being largely out of the spotlight, Wesley was as essential here as he is when functioning as Porcupine Tree's on-tour fifth member. The guitarist was all the more impressive given the circumstances of his joining Wilson for this tour, replacing original guitarist Aziz Ibrahim who, after playing the European dates, was denied entry into the US—a sorry reflection of the times, given he's British-born and raised, but Muslim and of Pakistani descent. Wesley not only had to learn a full evening's worth of music in just a few days, he had to adopt the myriad textures that were as fundamental as the actual notes being played. Holzman is better known in the jazz world for his work with trumpeters Miles Davis in the 1980s and, later, Wallace Roney on recordings including Prototype (HighNote, 2004), and while there was no mistaking the root of some of his voicings at the start of songs like "No Twilight," it was clear that, like Travis, the keyboardist was clearly working from a broader musical and textural palette.

Wilson was clearly having a blast—theatrical, but still directly engaging both his group and the audience. He spoke rarely, but when he did it was clear he appreciated a house that lived up to the Montreal's reputation for having some of the most enthusiastic crowds around. That Wilson was able to launch a small-scale tour, with the audio and visual scope of a larger-proportioned rock performance, was a testament to his ability to think and deliver big, both through the increasing availability of affordable technology, and the strength of a road team whose sound and lighting engineers were as professional and creative as they come. With rear projections augmenting the music throughout the show, the series of images on "Index"—butterflies and spiders, but with ominously greater targets in mind as well—captivatingly mirrored Wilson's danger-laden lyrics. Stunning lighting combined sharper details with massively saturating washes and strobe-like flashes, while a quad sound system was used to great and largely subtle effect without ever being gimmicky—just like Wilson's surround album mixes. 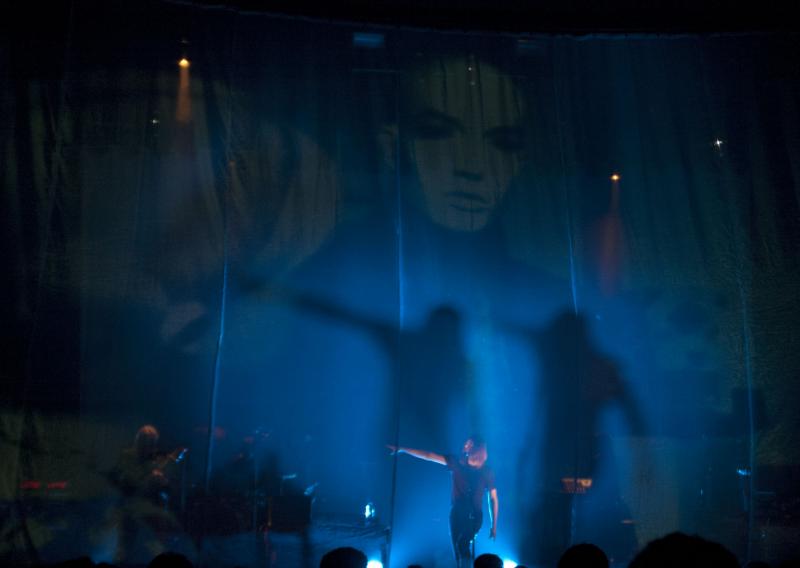 But at the core of the performance was Wilson's set list, which proved that songs sequenced as 40- or 45-minute concept albums on Grace for Drowning's two discs could be re-sequenced to different but equally compelling effect, creating a series of climaxes that led to the thundering peak of "Raider II" and the aggro-noise of "Get All You Deserve." Demonstrating maturing strength as a solo performer, if he can continue Grace for Drowning's clear growth from Insurgentes with a follow-up that's equally evolutionary, it's well within the realm of possibility that—combined with word-of-mouth buzz from shows like this—Wilson may need to move to a larger, more Porcupine Tree-sized venue for his next solo tour.