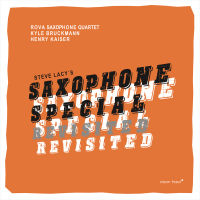 If you own a copy of the original Saxophone Special (Emanem, 1975), flip the LP over to view a photocopy of Steve Lacy's original notebook (with spiral binding) score of the compositions "Staples," "Swishes," and "Snaps." This is all music he performed at Wigmore Hall in London in December 1974 in a saxophone quartet that included Trevor Watts, Evan Parker, and Steve Potts. He also incorporated what he described as a "noise section" with guitarist Derek Bailey and the electronic synthesizer sounds of Michel Waisvisz. The original music was dedicated to Paul Gonzales, James Joyce, and Dizzy Gillespie. If you can connect those dots, I'd gladly send you a nice gift. Nonetheless, it is much easier to make the connections some forty-plus years later with this reinvention by ROVA Saxophone Quartet.

It was shortly after Lacy's and Anthony Braxton's experiments with improvising saxophone quartets that ROVA was formed. Now, forty years later, the members Bruce Ackley, Steve Adams, Larry Ochs, and Jon Raskin pay homage to this original spark. Kyle Bruckmann performs Waisvisz' role and Henry Kaiser, who collaborated with Bailey on several projects, most notably Wire Forks (Shanachie, 1993), holds down the guitar chair. Like their recreations of John Coltrane's "Ascension," (their "Electric Ascension"), this Lacy tribute is not performed as a repertory band, but as themselves. Having defined the genre of improvising saxophone quartet for many decades, we wouldn't want it any other way. ROVA performs the five Saxophone Special pieces, plus two additional Lacy compositions, "Clichés" and "Sidelines." The music is an ideal collision of the incomparable music of Lacy, the impeccable approach of ROVA, and noisy bits or the scratching, feedback claws of Kaiser and Bruckmann. The quartet-plus-two doesn't ignore melodies, they festoon them with their now distinctive sound, exploding themes into a million parts. A great listening experience like this, somehow assures you it was indeed a blast at the recording session.