BY MARK SULLIVAN
October 31, 2015
Sign in to view read count 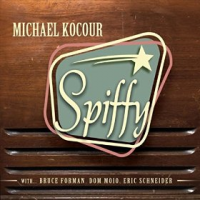 Keyboardist Michael Kocour revisits his Hammond B3 organ roots in this collection of hard-swinging tunes presented in the tradition of jazz organ legends such as Jack McDuff, Jimmy Smith, and Don Patterson. McDuff in particular is a stylistic mentor: Kocour met him during his college years while attending the renowned jazz program at the University of Illinois in Urbana-Champaign. The band really comes out swinging on the opener, Kocour's "Dropped Third Strike." Chicagoan Eric Schneider blows tenor with old-school bar-walking verve. He drops a brief quote from the old ragtime tune "Oh, You Beautiful Doll" into "Chunky," and makes his compositional contribution with "Da Good Stuff."

Things don't slow down until the fourth track, the ballad "Tenderly," which guitarist Bruce Forman introduces with Wes Montgomery-style octaves. The California-based guitarist lives up to his stalwart hard-bop reputation on the entire session, and contributes two tunes. "Collapso" is the most memorable. As the title implies it is a calypso, although taken at a moderate tempo unlikely to induce a collapse in these formidable players. The other cover in the set is Neal Hefti and Bobby Troup's catchy "Girl Talk." Originally written for a movie soundtrack, it has been played quite often by jazz players. Organ versions have included Shirley Scott, Jimmy McGriff, and Richard "Groove" Holmes; guitarist Kenny Burrell has recorded it as well.

This is Kocour's third 2015 release; the others—both on OA2 Records—featured him on piano (solo on Wherever You Go, There You Are, and as a member of the Unhinged Sextet on their debut disc Clarity). He explains that his teaching duties at Arizona State University often require him to complete projects in waves. It's almost too much of a good thing. But too much of a good thing is a good problem to have.