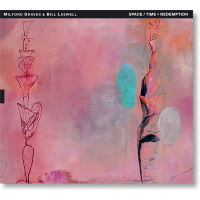 Drummer Milford Graves boasts a pedigree stretching back to the first tide of Free Jazz in the 1960s, most prominently as the drummer for the storied New York Art Quartet. His infrequent forays onto disc since have resulted in underground classics such as Nommo (SRP, 1966) with pianist Don Pullen and Babi Music (IPS, 1976) with a cast of fire-breathing saxophonists. As such his appearance on a newly recorded studio date should be cause for celebration. However in some ways Space / Time -Redemption represents the opposite of a meeting of minds, juxtaposing two different styles which don't really gel.

Perhaps that shouldn't be a surprise as joining Graves is acclaimed electric bassist and producer Bill Laswell, whose pet concept, according to music critic Chris Brazier, is 'collision music' which involves bringing together musicians from wildly divergent but complementary spheres and seeing what comes out. Laswell's credits which span the depth and breadth of American and world music certainly bear that out. He's been at the core of some of the heaviest bands to hit the stage such as Last Exit, with saxophone iconoclast Peter Brötzmann and Painkiller with John Zorn, as well as more commercially orientated projects with Herbie Hancock and Iggy Pop. But this collaboration achieves neither target.

Together they have created a program of five jointly credited pieces which all appear cut from the same cloth. Contrasts abound between their two approaches, if not the different selections. Graves generates a fast busy percussive flow which sounds entirely improvised, while Laswell's contributions are slow, spacey, and often melodic using overdubs and effects but little improvisation. But as often happens when melodic lines intrude into otherwise abstract settings, the overall consequence is to cast the drums in a supporting role rather than as an equal.

The most successful sections arise when Laswell propounds free hard scrabble bass alongside Graves' tribal drums, although even here the electric bass sounds too undifferentiated to ultimately sustain interest, although it does allow the ear to better focus on Graves pulsing layered tempos. There is a strange repetition of gambits across the album, as resonant electric bass lyricism adorns each cut except for "Autopossession." Similarly Graves rhythmic cymbal and gong interludes recur on every track but the opener. Indeed tinkling bells, like waves crashing on the seashore provide a background continuity across the whole set, although silenced by the separation between tracks.

In the end Space / Time -Redemption represents a curio for Laswell or Graves completists, but not the place for the uninitiated to start.