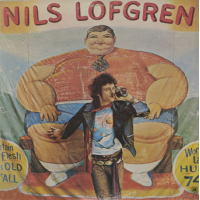 Apart from Nils Lofgren's essay of clear-headed, affectionate reflection and a few extra photos, there's no additional content on the reissue of his eponymous solo album (here often referred to as "Fat Man" based on the cover picture). But there really doesn't need to be: this is one of those very rare rock records that sounds now as it did on its release in 1975: perfect for its time and on its own terms.

Not that it's innovative. But the despair Lofgren alludes to enduring at the time, based on the dissolution of the band Grin, moved him to distill the rock and roll/pop elements of the songwriting skills he'd honed while fronting that band for this project. And there's no sense of the fundamental three piece suffering any holes in the sound on tracks like "Back It Up:" bassist Wornell Jones had helped forge the arrangements and, as noted in the timeline of preparation and recording, drummer Aynsley Dunbar added just the right mix of professional polish as spontaneity during performances such as "If I Say It, It's So."

Lofgren's co-production with mentor David Briggs (he of the Neil Young camp that had first nurtured Nils on his own, with his band and as honorary member of Crazy Horse)no doubt aided immensely in the overdubs of lead guitars and harmony vocals on that aforementioned track as well as "One More Saturday Night." During the songwriting for the record, the leader's instrumental versatility also built upon his use of acoustic guitars as featured on "I Don't Want to Know," while his fluent piano playing accentuates the bounce of the track as much as it forms the bedrock of "The Song Hasn't Set On This Boy Yet."

The similar-sounding version of Gerry Goffin and Carole King's "Goin' Back" here is a quiet but resolute statement of purpose from an artist who's created quite a body of work for himself in the interim since the release of this album, both on his own and in collaborations with others (including a multi-decade stint in Bruce Springsteen's E Street Band). Some more astute marketing and PR four decades ago might've successfully catapulted Nils Lofgren into the mainstream in a guitar hero role he plays so convincingly and stylishly here on his homage to Rolling Stone Richards "Keith Don't Go (Ode to a Glimmer Twin)," yet the charm and talent evinced in the lyrics to "Duty," as well as the slide guitar and barrelhouse piano that adorn the arrangement, would've conceivably allowed him to transcend the stereotype.

"Rock and Roll Crook," however, suggests the kid's braggodocio was a bit too self-deprecating and tongue in cheek for his own good. This phase of Nils Lofgren's solo career didn't last much longer than his stint with Grin, but this record remains an essential chapter of his history and, arguably, in the rock era of its time. As such, even though there's no indication any remastering was done, the restoration of the record to the marketplace after being out of print so long indicates just how indispensable a title it is.

Be Good Tonight; Back It Up; One More Saturday Night; If I Say So, It’s So; I Don’t Want to Know; Keith Don’t Go (Ode to the Glimmer Twin; Can’t Buy a Break; Duty; The Sun Hasn’t Set on This Boy Yet; Rock and Roll Crook; Two by Two.