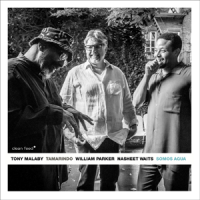 Saxophonist Tony Malaby's Tamarindo, featuring the unerring bassist William Parker and explosive drummer Nasheet Waits explore the possibilities of the saxophone trio on Somos Agua with frequently staggering results—sort of like a very free version of the Sonny Rollins unit with Wilbur Ware and Elvin Jones that recorded A Night at the Village Vanguard some 57 years ago.

Waits crackles and pops like gunfire in a high-rise alley as Malaby riffs in a stream-of-consciousness style reminiscent of Ornette Coleman's infinite melodic information with some Albert Ayler tonal manipulation thrown in. Parker's strums, pedals, and arco construct a mooring pylon around which the raging currents of tenor shrieks and drum fusillade circumnavigate on the blistering "Mule Skinner," which concludes on an archetypal bowed solo that serves as the connective tissue into the free-dirge of "Loretto," where his resonant pizzicato holds down the fort.

Although it's possible to hear bits of Rollins, Coleman, Ayler and Dewey Redman in Malaby's aesthetic—they're only bits—he's found a voice of his own; surviving in the intensely swinging melee conjured by Parker and Waits wouldn't be an option otherwise, especially in the sonic onslaught of "Matik-Matik" which burns hot enough to melt steel.

Waits's dynamic finesse is quite amazing; he can churn the kinetic-energy up to triple-forte or dial it as quiet as a church mouse—something he does several times during the course of the wildly episodic "Can't find you..." which shifts from maelstrom shouts to pensive wails —all with a groove strong enough to climb on.

The concept of groove, of course, is one he shares with the redoubtable Parker, whose inventions can gild even the most skeletal constructs into a dancing being—whether he's plucking like a free Percy Heath or sawing like a hornet's nest —it all pulses with the primal force of the human heart.

Malaby's got something going here, and the music on Somos Agua is a prime example of where the saxophone trio should be headed in the years to come.