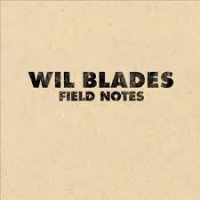 Keyboardist Wil Blades earned his pedigree playing with guitarist Will Bernard and percussionist Billy Martin and now ratchets up his leadership skills fronting a trio including guitarist Jeff Parker and drummer Simon Lott. Concentrating on Hammond B3 organ (using clavinet to leaven the textured sound of the group), Blades proves he has absorbed the lessons from masters of the hallowed instrument such as Jimmy Smith and happily carries them into the future.

He the alternately fluid but funky sound on "I Can't Stand the Whole Lott of You" with an ever-so-light touch and the rhythm machine to whom the title refers that approach with terse breaks that further propels the track along. Parker performs a similar function on "Chrome," inserting quick chordal fillips in between syncopated organ figures, all of which happens purely instinctually (or so it would seem). Such three-way chemistry only makes sense given the germination of Field Notes' material: ideas taken from soundchecks and other impromptu moments on the road have evolved into full-formed material that exhibits the ready accessibility of pop tunes without the genre's usual predictability.

"Dewey," for instance, begins and proceeds at a languid pace, Lott tapping the beat as Parker's strings emit glowing tones cushioned by gentle yet insistent swells from Blades' Hammond. Clearly the leader of the ensemble as its main composer and dominant instrumental voice, the keyboardist artfully sets a tone all three can follow rather than erect a hierarchy that limits the free play or subsumes the individuals. Like the only non-original here, "I Get the Blues When It Rains," that tune is so insinuating it'd seem to beg for lyrics to further illuminate its mood except that the instrumental interaction between these three players is so vivid words apart from the title would be superfluous.

As perhaps would more extended improvisation: Blades Parker and Lott play with the basic structure of such tunes as the whimsically titled "Parks n' Wreck" just enough to suggest the possibilities of jamming extensively on them, preferring, and wisely so, to formulate nine tracks of terse economy.

Thus, a spontaneous air permeates Field Notes lending itself naturally to the quick smooth segue from which proceeds "Addis." The record, in fact, sounds and feels like a single extended moment of sudden inspiration take to its logical extension based on the natural cohesion of the musicianship. As effortless as it feels to become lost in the dream-like quality of "Forgetful," so must it have been for Blades, Parker and Lott to immerse themselves in these sounds of their own making.