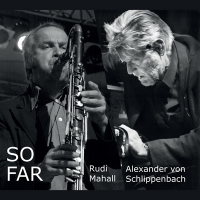 The raw materials with which pianist Alexander von Schlippenbach and clarinetist (chiefly bass clarinetist) Rudy Mahall work on the free improvisation recording So Far, are best described as untreated, as opposed to unrefined, the other definition of raw. Their music is reduced to its essential components of sound, pulse, and interplay.

The two German musicians are equally versed in traditional jazz and free improvisation. It is always fascinating how both can switch from covering Thelonious Monk's entire oeuvre on Monk's Casino (Intakt, 2005) to instant composing. Comfortable with jazz styles from both sides of the Atlantic, Mahall has played in the proto-punk free-bop band Die Enttäuschung, in JR3 with Jan Roder and Olaf Rupp (which released Happy Jazz (Relative Pitch, 2017), and performed some intricate solo work. Similarly, the pianist finds the music of Monk, Eric Dolphy, and Herbie Nichols sympathetic, but can go toe-to-toe with the giants of European improvisation, Peter Brötzmann and Evan Parker.

Unpacking the music on So Far, von Schlippenbach and Mahall are occupied with a push-pull dialogue, sometimes applying rapid-fire percussive notes as provocation—"All Jazz Is Free"—and other times stacking notes in service of a shared construction, as on "Barrel." They offer the listener a chance to pursue their rapid-fire dialogue on "Side Stroke," or surf the edges of extended techniques on their instruments on "The Trap." Their music is more stripped-down than deconstructed, opting for emotion over intellect. Mostly. The final track "Apostrophy," a sideways take on "Epistrophy," mines Thelonious Monk's music for phrases, ultimately building a quilt out of Monk's gestures.

All Jazz Is Free; Barrel; Knockemstiff Can Can; Chase; Boiling Desire; Folk Ingredients; All In; Straight Ahead; Side Stroke; The Trap; Apostrophy.