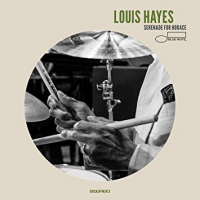 This gem of a tribute album is, in the words of the poet Wordsworth, a "recollection in tranquility" conceived and led by drummer Louis Hayes in memory of his beloved lifelong friend, pianist Horace Silver. In 1956, Silver invited Hayes to New York City from his native Detroit to join the Horace Silver Quintet, which produced a series of ground-breaking Blue Note albums. Now, at 80, Hayes' drumming is as superb and as youthful as ever, a reason in itself to have this album. He brings together a group of seasoned, dedicated musicians to honor Silver, not by imitating or outdoing him, but by playing his music with great fidelity to Silver's ideas and the hard bop period which he helped to innovate. Thankfully, Hayes had the wisdom neither to copy nor expound upon but definitely emulate Silver's contribution in many respects.

Pianist Tom Lawton has aptly summarized Silver's unique playing as follows: "Horace had a mixture of a very guttural approach to bebop: a percussive right-hand attack and often very raw, drum-like left-hand accents, (best example: "Opus de Funk"). He also explored a funky, gospel-tinged, soul and groove influenced music ("Song For My Father") that had a unique feel because of his father's origin in the island of Cape Verde." The Cape Verde Islands off the coast of West Africa were slave trade transit points to South America and the Caribbean and where Creole culture -so important to jazz—originated, and which shares the Portuguese influence with Brazil. Silver composed his well- known "Song for My Father" after a trip to Brazil that profoundly influenced his subsequent playing.

Silver was a prolific composer, sometimes adding his own lyrics. Most of his originals on this album are from the extended and extensive Blue Note recordings between 1952 and 1981. "Ecaroh" (Horace spelled backwards!) and "Room 608" are from the pre-Hayes Jazz Messenger period in which hard bop was literally invented. The album provides a retrospective that is firmly rooted in Silver and hard bop, but is more laid back and less feisty than the original Silver recordings.

The first tune, "Ecaroh" presages the whole album. Hayes' drumming is superb and measured, in contrast to the banal prestidigitation we hear too often. His swing is lighter and more subtle than in the Silver era, perhaps influenced a bit by Elvin Jones. The horn players Abraham Burton on tenor saxophone and Josh Evans on trumpet, vibraphonist Steve Nelson, and bassist Dezron Douglas are completely in service of the music rather than inserting their own idiosyncracies.

Next, the iconic "Señor Blues" is a tad slower than on the Silver recording Live at Newport '58 (Blue Note, 2008). Hayes and the group emphasize the R&B influence over the Latin rhythm implied in the title. The saxophone and trumpet work is sharp and clean, echoing Silver Newport cohorts Junior Cookand Louis Smith.

Guest vocalist Gregory Porter does a fine if understated delivery of "Song for My Father" with inflections that bear a distinct resemblance to Kurt Elling. The Brazilian samba rhythm that influenced Silver in writing this song comes through clearly. Dee Dee Bridgewater's version (Love and Peace: A Tribute to Horace Silver, Verve, 1995) is faster and more intense. Porter is closer to Silver's intention, but Silver's inspired piano improvisations on this song are well worth going back to for their own sake.

At the suggestion of the producer Maxine Gordon, Hayes wrote one original for the collection. "Hastings Street" was stimulated by his memories of Detroit and is a "classic" hard bop tune that is a prefect vehicle for solos, in this case by Burton, Evans, and Nelson. Some feather-like vibes comping by Nelson adds a special touch, and there is some generous co-improvising at the end, something Silver liked to do in his arrangements.

"Strollin'" is a virtual replica of the Horace Silver Quintet version on Horace-Scope (Blue Note, 1960) with Junior Cook on tenor and Blue Mitchell on trumpet. "Juicy Lucy" features an outstanding saxophone solo by Burton. The group does a straightforward version of "Silver's Serenade," while Silver's "Lonely Woman" (not the Ornette Coleman tune) is notable for Bryant's extended piano tribute to Silver, which one has been waiting for all along!

Silver had a sunny disposition on most days, and "Summer in Central Park" is, as the title suggests, a pleasant sunny day walk in the park. The title of the next tune, "St. Vitus Dance," portends something different but turns out not to be so. St Vitus Dance is a disease characterized by rapid, uncoordinated jerking movements. The version on this album swings so well that it is a cure for that disease rather than a symptom of it! The album ends with "Room 608," a fast-paced strictly bebop tune which shows the important Bud Powell influence on Silver. Silver could have become just another great bebop player, but he was wise enough to pursue his own voice, which, if we can judge from the lyrics of "Song for My Father," is a striving that came from the advice of his dad. And Louis Hayes is to be thanked for adhering to his stated goal: a loving remembrance and tribute to Horace Silver rather than a flashy post- modern pot-boiler.