Seleno Clarke: Bringing The Music Back To Harlem

By AAJ Staff
December 22, 2009
Sign in to view read count
Seleno Clarke
American Legion
248 W. 132nd St., New York City
Jazz went east in the 1920s and '30s, moving from New Orleans and Chicago to Harlem. But jazz left Harlem in the 1960s, when it moved to clubs downtown and R&B and rock began to take over. Music in general began to leave; for example, the young Jimi Hendrix felt more comfortable in Greenwich Village and soon relocated there himself.

In the last 10 years, a die-hard Hammond B3 player has been on a mission ... to bring the music back to Harlem. The star, Seleno Clarke, hosts a Sunday night jam session at the American Legion basement venue on 132nd Street. Clarke began his career in the '60s, when he played with Count Basie's band (as a saxophonist), but he was then drawn to the Hammond. Since his time with Basie, Clarke's groups have included Grant Green and George Benson as guest guitarists. Clarke's work in the '70s included a track called "Stimulation" that "sold for $500 on eBay" and is "a no-holds-barred deep funk monster," according to the website for Decks Records. A more relaxed '70s 45—a track titled "Soulful Drop"—is featured on Clarke's site in mp3 form. 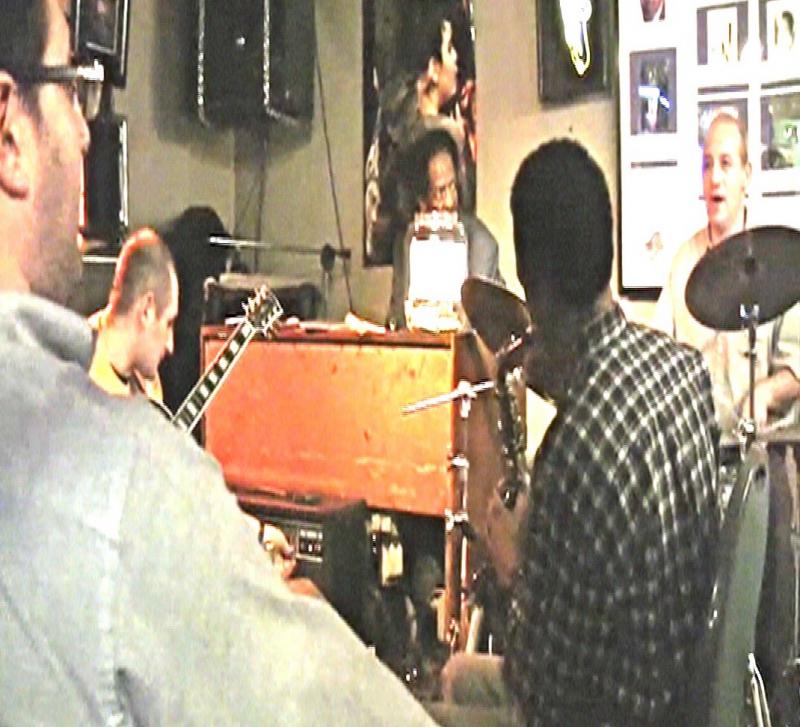 The Sunday night streets may be empty around 130th and 8th streets—convenience stores closed, all is quiet—but down in the basement of the American Legion building, the joint is jumping. Local fans, jazz fans from elsewhere in Manhattan, musicians and the occasional star make the scene. The venue is between Frederick Douglas and Adam Clayton Powell Boulevards, that is, the old 7th and 8th streets, and being on 132nd Street it is, of course, seven streets above the Apollo Theatre.

In Harlem, there is now a virtual Hammond fest; Clarke's evening jam attracts fans and Hammond players from all over. On a winter's night, musicians from as far away as Poughkeepsie, N.Y., were in attendance. One of those musicians, organist Michael Torsone, had the floor for a good part of the evening, and he was accompanied, at the drums, first by Jacob Melchior and then Torsone's regular band drummer, Steve DiGiovanni. Of course, a succession of sax players sat in. Italian guitarist Daniele Feretti provided guitar.

The unmistakable Hammond groove rocked the stone work and, no doubt, the array of Clarke's certificates of acknowledgment (for his efforts in running the club) mounted on the walls. Clarke says, "If you look up on the wall you can see one proclamation from the city council—Bill Perkins—he is now the New York State Senator. And I just received another honor about two weeks ago, which was my 10-year anniversary." (In 2001, The City Council of New York made a proclamation in honor of Clarke's contribution on the Hammond and his contribution to Harlem and New York City. In the same year, there was also a proclamation award by the Borough President's Office. He has also received awards from his home state of Maryland.)

Torsone plays vintage Hammond and eventually sang—with a girl holding the mic—a version of Procol Harum's "A Whiter Shade Of Pale" (DiGiovanni was now on drums). During a guitar solo in a later number, Clarke was dancing at the bar. The Hammond does that. On top of the Hammond sat The Love Jar. It was not short of a few bills! During one number, an audience member raised his hand up, palm out, to accompany the lift in key he knew was about to happen. Alto sax wailed as the atmosphere heightened. Melchior threw in some cymbal to his relaxed snare and bass drum, matching the climb.

Clarke says, "We take Sunday nights very seriously here." He says that sometimes rappers and hip-hop artists come up to see what is happening, and they are blown away by the real deal—what they are seeing is live, organic music. Hammond jazz playing was, of course, pioneered by Jimmy Smith in the '50s and '60s. Soon he was joined by names such as Jimmy McGriff, Jack McDuff and Dr. Lonnie Smith, who played organ on Benson's early swinging albums, It's Uptown with the George Benson Quartet (Columbia, 1965) and The George Benson Cookbook (Columbia, 1965).

Benson produced the first of Clarke's two albums, a quintet album titled All in One Diversity (Self Produced, 1999). Clarke's second album is Diversity #2 (Self Produced, 2003), a live album of Clarke and his Harlem Groove Band at Smoke on Broadway in Manhattan. The album features Jim Rotondi on trumpet and Eric Alexander on tenor sax.

Following Torsone's set, Clarke took over the Hammond. The smooth groove of '60s and '70s Hammond snaked around every stool and table, as the ghost of Wild Bill Davis appeared and Duke Ellington's accompanying finger-snapping became a reality. Another saxophonist starred on alto, and you could soon imagine you were at a '60s recording session.

Clarke says, "My dream was ultimately to ... bring the musicians back to Harlem and give back to the community—and that's basically what I'm about, you know. I'm having people from all over the world— there's a tremendous amount of diversity here. That was my dream—people from Europe, Japan, South America, everybody. So that's what my dream has been about."

The Hammond draws strong compliments from its players. Clarke calls it "a nostalgic instrument," and Dr. Lonnie Smith once simply stated, "It's a beautiful instrument." "Yes," says Clarke about Smith's assessment. "I call it 'The Beast.'" That beast was soon on the prowl.

It takes a lot of work from the backing musicians to keep up with a Hammond. Clarke puts it in perspective: "I have a lot of energy when I play, and I have to have the right energy behind me to project or execute or to deliver, (that's the) bottom line. ... I put that Hammond in here like 10 years ago—it's my baby."

Well known artists can drop in at the session too, such as Dr. Lonnie Smith and alto sax legend Lou Donaldson. "Oh yeah," Clarke says. "Lou comes in here. In fact, he was here last week. I'll tell you the guys that come through here: Jimmy McGriff, the late Jimmy McGriff, Joey DeFrancesco, Dr. Lonnie Smith—he was here about two weeks ago and played. I get a host of others. So many come through here in the last 10 years. They all know me; we're all like family ... because it's like my living room. This is not a night club; it's my living room, and they're all welcome to come in and we have a great time here."

If you have a Hammond on hand and brilliant Hammond musicians on the bandstand, a great time is inevitable. Did the music comeback to Harlem? Mission accomplished!