By Mark Corroto
November 12, 2010
Sign in to view read count 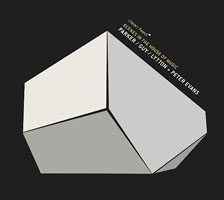 Saxophonist Evan Parker, bassist Barry Guy and drummer Paul Lytton have playing together in one form or another since 1972. Their longtime association has created improvised magic, and their appearances are legendary. In 2009, the trio shared the stage with trumpet phenom Peter Evans at Casa da Música, and this impressive recording is the result.

The Parker/Guy/Lytton trio was first documented on Tracks (Incus, 1983). Since then, they have released multiple discs, the last being Nightwork (Marge, 2010). They have also, from time to time, collaborated with other artists such as pianists Marilyn Crispell and Alexander von Schlippenbach, and saxophonist Peter Brötzmann.

What is significant about Evans' introduction into this trio performance is how he fits with such consistency and compatibility. He cannot be considered a guest, he sounds too much like a core member. Evans burst onto the improv music scene through his playing with Moppa Elliott's Mostly Other People Do The Killing, and his own quartet and solo trumpet music, which displayed jaw-dropping technique. He has released two solo discs on Evan Parker's Psi label: More Is More (2005) and Nature/Culture (2009).

The now-signature sound of Parker/Guy/Lytton's energy jazz is heard on "Scene 1," its rumbling connectivity feeling like an M.C.Escher drawing, full of perceptual quirks and geometric distortions that all fit and flow together. Evans extends that illustration without disturbing its logic. "Scene 2" opens with the trumpeter's ruminating horn, sung/vocal notes resonating in the auditorium before his hosts enter slowly, Guy pulling his bow across strings and Lytton tapping random beats. This more introspective piece highlights the give-and-take of the trio plus one, listening and responding to each others' sounds.

Parker breaks out his circular breathing on "Scene 4," and the intensity is turned up. Way up. The music turns forceful and vigorous, with Guy sawing notes and Lytton crashing cymbals. The old lions display a bit of roar, and the young Evans howls along. Midway into the piece, Lytton and Guy sit out, as Parker and Evans square off, exchanging a menagerie of blurps, yowls, and clucks to the delight of the audience. By the time the Lytton and Guy have come back in, the balance of the affair has returned, to great effect.