By Dan McClenaghan
March 21, 2020
Sign in to view read count 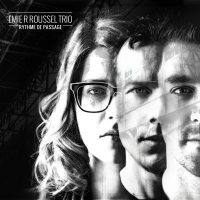 Putting the originality of the sound aside, influences on the trio's approach, beginning with "Yatse Club," seem European: Tord Gustavsen, via oblique melodies and sometimes drifting, sometimes insistent rhythms; Esbjorn Svensson's E.S.T. for the electro-sparkle—Roussel uses, often, a Nord Stage 2 keyboard. Bassist Nicolas Bédard is also plugged in. Looking to the U.S. jazz scene, the compositions on Rythme de Passage lean in the direction of Brad Mehldau's early tunesmithing, with circular motifs and understated intensity.

The set's title tune begins with a ruminative piano statement which gathers momentum and grandeur, with Dominic Cloutier's bursting cymbal splashes giving way to a tight, tart bass solo. "Agent Orange" is prickly and agitated, glistening, shifting into a rock-like groove, while "Tatiata" has perhaps the set's prettiest, most passionate vibe, and "Empriente" begins by looking inward, before shifting to bright and optimistic gregariousness.

With a decade of playing and recording together, the Emie R. Roussel Trio has developed a distinctive and exciting modern piano trio approach, on full display on Rythme de Passage.