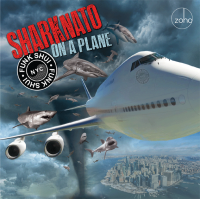 While some older listeners (and younger ones as well) may be thrown slightly off-kilter and find it hard to apprehend exactly what Funk Shui NYC is about, it must be conceded that the New York-based ensemble in all likelihood represents the future of big-band jazz, or at least a sizeable and assertive chunk of it. The name itself offers an explicit clue, as Funk Shui is indeed heavy on the funk (rather less on the shui, whatever that is), as well as on other contemporary grooves such as rock, hip-hop, Afro-Cuban, doo-wop and even a hint of "free" jazz. Tempos are for the most part lively, group interaction sharp and seamless, melodies pleasing, solos lucid and resourceful.

As for the rhythms, they take their cue from present-day pop-rock, driving most numbers implacably forward behind the forceful volleys of drummer Peter Grant and percussionist Rex Benincasa. The other sections are no less decisive, enriching every number with an abundance of power and persuasion. Funk Shui's music may be exploratory, even unconventional, but it is most definitely jazz, nimbly performed by fifteen musicians who are by no means new to the game. Co-leaders Dave Morgan and Rob Susman wrote five of the album's ten numbers; the others were composed by George Harrison ("Blue Jay Way"), Cream ("I Feel Free"), Allen Toussaint ("Everything I Do Gonna Be Funky"), Jack Elliott ("What Barney?" a.k.a. the theme from TV's Barney Miller), DuBose Heyward and the Gershwin brothers (the album's lone standard, "Summertime").

Susman's "Shark NATO" leads the way, its Latin-cum-rock beat prefacing gritty solos by Morgan on baritone sax and Susman on trombone. Morgan's "July Groove / September Funk" is next, its slick 1970s-style funk and addictive melody giving way to earnest statements by trumpeter Bryan Davis and alto Charles Lee. "Barney Miller" is set to a hip-hop beat, while "Summertime" assumes a Latin rock persona and Susman's quirky "Into the Fourth Dimension" is a fluent showcase for trumpeter Seneca Black and the rhythm section. The second half of the session offers more of the same, starting with Morgan's angular "Professional Development" and proceeding through Susman's shuffling "Rock Bottom," the easygoing "Blue Jay Way," high-spirited "I Feel Free" (complete with unison hand-clapping) and loose-limbed "Everything I Do" (with Susman and fellow 'bone Scott Barnes holding a close-knit "conversation"). Other assertive solos are imparted courtesy of trumpeters Chris Anderson and Jordan Hirsch, tenors Stan Killian and John Isley, alto Chris Hemingway and bassist Dan Ashley.

Make no mistake, Shark NATO won't be everyone's cup of tea or blue-plate entree—especially those whose idea of a big band starts with names like Ellington, Basie, Herman, Rich or even Kenton. There is, on the other hand, no doubt that this is big-band jazz, superbly designed by first-class musicians. And once past the funk, rock and hip-hop substructure, it has much to offer those who choose to set aside any partiality and simply listen.

Shark NATO on a Plane; July Groove / September Funk; What Barney? (the Barney Miller theme); Summertime; Into the Fourth Dimension; Professional Development; Rock Bottom; Blue Jay Way; I Feel Free; Everything I Do Gonna Be Funky.