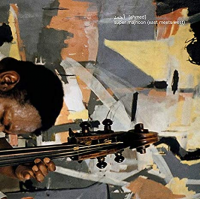 It's well known that artistic constraints can in fact aid creativity, but few have put the theory into such good practice as [Ahmed]. The international co-operative of improvisers, comprising the British pair of pianist Pat Thomas and saxophonist Seymour Wright, Berlin-based Swedish bassist Joel Grip and French drummer Antonin Gerbal, takes as its unlikely premise the pioneering music of American bassist Ahmed Abdul-Malik which fused Arabic, East African and jazz modes.

Claiming Sudanese descent (although jazz historian Robin Kelley has shown that his family's roots lay in the Caribbean), Abdul-Malik produced a series of albums in the late 1950s, notably Jazz Sahara (1958) and East Meets West (1960), which have inspired the music on Super Majnoon (East Meets West). A follow up to the group's debut, New Jazz Imagination (Umlaut Records, 2017), it's a double LP, with the first two sides recorded even further east than Abdul-Malik ever imagined, in the studio in Hong Kong, with the last two waxed in concert at Cafe Oto in London.

The title comes from joining the name of Abdul-Malik's album and a comment from the leader of the Master Musicians of Jajouka, Bechir Attar's description of [Ahmed] after hearing the group in Switzerland in 2018 (Majnoon is the Arabic slang for 'crazy').

Although there are individual decorative flourishes, the 75-minute program reveals nothing that might pass as a solo. The artistry comes in the ferocious focus on the collective aesthetic. Wright and Thomas for much of the time relentlessly propound one or two notes. If this makes the prospect seem unattractive, then nothing could be further from the actuality. The result is absolutely gripping.

The group's variations seem extemporized in real time, and the detail of how they shift from one pattern to another continues to absorb and fascinate on repeated spins. Their totally committed approach, wayward spikiness and improv edge stop it becoming hypnotic or soothing. If this is minimalist music, it's the sort that you'd cross the street to avoid if you saw it coming towards you: compelling, unhinged, with a hint of danger, but you can't take your eyes off it.

"E-Lail (The Night) East" adopts the time and rhythm of Abdul-Malik's original and subjects it to a gradual evolution over the 19-minute extent. Grip's bass acts as the foundation stone, holding down the original riff, which he slowly transmutes, while Gerbal's brushes play around the cadence but keep the essential pace. Wright and Thomas quickly deconstruct the melody into short rhythmic phrases which they replicate, varying only the tone in Wright's case, drawing on the command of timbre which distinguishes his work elsewhere, to call on a litany of squeaks and whistles.

Thomas largely restricts himself to the treble keys, hammering out Morse code signals and offkilter single line reiterations. Even though everything changes, they maintain a coherent feel and tempo, such that towards the close, there's no awkward transition when Grip slips back into the initial riff.

"Farah 'Alaiyna (Joy Upon Us)" is slightly more untethered. To begin, Grip's arco drone evokes the devotional mood of the original before moving into unremitting propulsive sawing. Over the course of its 17 minutes the piece develops into a dervish frenzy. Gerbal's roiling drums herald a free jazz maelstrom as Wright and Thomas preserve the pulse and thereby a slender thread leading back to the starting point. Sides 3 and 4 revisit "E-Lail (The Night)" in front of an audience, and live the process of freeing up takes on an unrelenting urgency, becoming if anything more pounding, heavy and extreme, culminating in unruly crashing synchrony and hurricane force gales.

The realization of the whole concept is both utterly bonkers and utterly riveting. If you can't get enough, then the gods are smiling on you as the digital download comes with two further live bonus tracks, "East Meets West Aggregates" and "El Haris" totalling another 80-minutes of rapturous, headbanging glory.