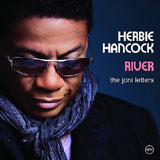 While it might be easy, on the surface, to view pianist Herbie Hancock's River: The Joni Letters as a continuation of Possibilities (Hear, 2005), nothing could be further from the truth. Possibilities was an unapologetically pop record; River is unequivocally jazz—although such broad classifications shouldn't matter. River is, quite simply, a superb disc that takes Joni Mitchell's extant jazz proclivities and gives them an even greater interpretive boost.

The majority of River is culled from Mitchell's "classic" songwriting period—Clouds (Reprise, 1969) through Hejira (Asylum, 1976). Still, "Tea Leaf Prophecy," from Chalk Mark in a Rainstorm (Geffen, 1988), featuring a guest vocal appearance from the songwriter herself, proves that, while she may not be writing as consistently, she still is capable of greatness. Here Hancock's group—saxophonist Wayne Shorter (no stranger to Mitchell), bassist Dave Holland, drummer Vinnie Colaiuta and guitarist Lionel Loueke—plays it light, with a gentle bossa rhythm that's even more harmonically rarified than Mitchell's arsenal of open tunings have been on her own versions.

The title track from Court and Spark (Asylum, 1974) begins in pianistic abstraction, but ultimately settles into a soft groove for Norah Jones' characteristically relaxed vocal delivery. But while the groove remains during both Shorter and Hancock's solos, the group transcends Mitchell's innate lyricism into more adventurous territory. Holland skirts the line between interaction and anchor, while Colaiuta is the biggest revelation. Best known as a virtuosic powerhouse drummer, his remarkably subtle work throughout the album affirms there's far more to him than reputation suggests.

Tina Turner turns in a surprisingly understated "Edith and the Kingpin," from The Hissing of Summer Lawns (Asylum, 1975), while neo-soulstress Corinne Bailey Rae's sweet-voiced version of Blue's (Reprise, 1971) "River" feels almost paradoxical, turning the song's plaintive wish into optimistic reality. Leonard Cohen approaches "The Jungle Line" as spoken word in duet with Hancock, who stretches the esoteric Hissing tune even farther, while Shorter winds in, out and around Luciana Souza—whose own The New Bossa Nova (Verve, 2007) establishes an unmistakable debt to Mitchell—on a deeply personal reading of Hejira's "Amelia."

Two non-Mitchell instrumentals—Duke Ellington's classic "Solitude" and Shorter's "Nefertiti"—draw a direct line between Mitchell and the jazz world. "Nefertiti" is especially notable. The original, mid-1960s Miles Davis Quintet version was a vibrant feature for the late drummer Tony Williams. Here, Shorter plays more liberally with the repeating theme, with Hancock driving the tune's improvisational core, while Colaiuta begins in relative quiet, but builds to a powerful climax before everyone fades gently to black.

But it's Clouds' classic "Both Sides Now" that defines the album's elegant but intrepid spirit. Mitchell's familiar melody may be obscured by a more daring and elastic approach, but it's there nevertheless. River: The Joni Letters is both classic Hancock and proof of the potential for Mitchell's material to be taken even further into the jazz sphere, with a group that respects the writing while viewing it as grist for greater liberties.