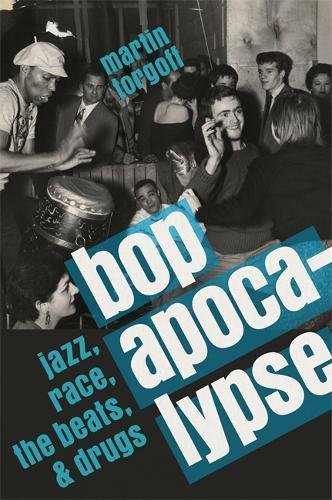 The vilification and suppression of marijuana and narcotics in the U.S. was fueled in the 20th century by a campaign that whipped up fear of "the other"—Mexicans, Caribbean islanders, South Americans and African-Americans. Bop Apocalypse limns the history of this campaign and uses it to frame the story of how our own American "others"—(black and white) jazz musicians and the (white) Beat movement-interacted with each other and with law enforcement.

Most of the key cast of musical characters in Bop Apocalypse will be familiar—Louis Armstrong, Mezz Mezzrow, Lester Young, Charlie Parker and Billie Holiday. So too, will the cast of Beats—Allen Ginsburg, Jack Kerouac, Neal Cassidy and William Burroughs. Others playing smaller parts are Miles Davis, John Coltrane, Jackie McLean and writers Antonin Artaud, John Clellan Holmes, Michael McClure, Herbert Huncke and a few others.

As chief antagonist, we have Harry Anslinger, for 30 years the head of the Drug Enforcement Agency. Anslinger was a master propagandist, willing to manufacture evidence in order to convince the public and Congress that, well, we know the litany: gateway drug, leads to violent crimes, corrupts youth. All the "facts" about marijuana that have dominated public opinion until recently were shaped by Anslinger. And yes, in some quarters, they continue to dominate.

For most readers, the story of the interaction between Anslinger, Congress, the law and the perps will be new. Details of Lester and Billie's stories will make for interesting reading, while the stories of Armstrong, Mezzrow and Bird as told here may serve to fill in parts of stories we already knew.

A few other aspects of the book stand out. First of all, I'm used to thinking of the Beats—Kerouac, Ginsburg, et al, as planets in eccentric orbits, interacting intensively but haphazardly. Torgoff shows there was a discernible flow of ideas and influences that bound the group together and shaped white beat/bohemianism in mid-century America. He shows there were clear literary and cultural through-lines: Club Des Hashichins, Gautier, Hugo, Balzac, Spengler, Rimbaud, Blake and that smoking pot, although useful sexually, was part of a shared ethic of drug use as spiritual exploration.

The author describes interplay between the Beats and jazz musicians that gives a sense of their relationship; for example, Lester Young turning Kerouac on to pot. Influence between these two groups seemed to flow pretty much in one direction-from jazz to beats. One infers that jazz culture was not particularly interested in "new literature," although eventually collaborations arose between poetry and jazz.

The difference between the white and black experiences of being "outsiders" is noted. Historically, the campaign against drugs was a campaign against outsiders and jazz musicians were some of the first and most overt outsiders. The jazz world was a backdrop for the intermingling of races and the cultural center of pushback against the Yankee and Puritan ethics. The beats, too, were easy to peg as cultural outsiders, but they didn't have the added layer of racism to contend with.

Torgoff engages the question of whether Kerouac's romanticizing of jazz was another example of white de-dimentionalizing of the black experience. He seems to take it as it comes—a marker of Kerouac's genuine affection and empathy for the black jazz world. I've always had my doubts, in fact saw a cartoon-ish quality to some of Kerouac's writing on jazz and this book didn't change my mind, but Torgoff's presentation gives the reader a fair view of competing perspectives.

Torgoff tries to come to terms with why such a large number of jazz musicians became heroin addicts in the 40's and 50's, Of course, there was Charlie Parker's out-sized influence and Torgoff explores this and some other ideas. Ultimately, though, his approach is to tell a number of individual stories of addiction; to personalize it rather than trying to over-theorize about it. Even though part of me wishes to find more closure on this vexing question, I think Torgoff's approach is viable and useful.

The long exploration of Burroughs' life is fairly interesting, but I see it as an extensive footnote or an Appendix, not something that should be in the body of the book. So too, the story of the junkie-prostitute Ruby, who had crossed paths with Billie and Bird at a shooting gallery. I don't think there's enough there to spend as much time on the story as Torgoff does and see it as another Appendix. Speaking of structural aspects-the Notes and Bibliography are extensive, but the lack of an Index for a book of this scope and size is disappointing.

Don't get me wrong. Torgoff does many things right and those who've read about this subject in a scattershot way will find in this well-written book a coherent exegesis of several important 20th century cultural currents. There is a great deal to ponder in Bop Apocalypse and what I read here will usefully inform my thoughts about how we are now dealing, or not dealing, with drugs, literature and jazz.