By Mark Sullivan
January 10, 2023
Sign in to view read count 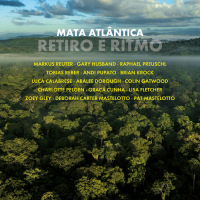 Retiro e Ritmo is a love letter to Mata Atlântica, the coastal rain forest of Brazil, and a call to help preserve and protect this beautiful habitat. The music supports that goal not by quoting or referencing Brazilian music directly, but by building a complex musical ecosystem that evokes it, obliquely creating a sense of place.

The album is the brainchild of co-producer Mathias Derer, motivated by a 2017 Brazilian visit. Although he does not perform, he composed most of the vocal melodies. The recording process began with field recordings and electronic beats (inspired by Brazilian rhythms) created by Tobias Reber (who worked with producer Markus Reuter in the band Centrozoon). From there the recording was built up layer by layer. Raphael Preuschl added electric and double bass parts; Gary Husband contributed tracks of piano and other keyboards; finally, after several horn parts, Andi Pupato added percussion. The original plan had been to use a rotating cast of guest musicians, but these players quickly coalesced into the core band.

"Candles in Brazil" opens the album with the catchiest, most pop-oriented melody in the set. But it is layered on top of a rich, dense bed of rhythms and harmonies. Charlotte Peigen's English vocals give way to Graça Cunha's Portuguese vocals before they overlap into a virtual duet. Aralee Dorough's flute provides a melodic counterpoint. "Sempre O Mesmo" has a similar emotional effect, this time driven by melodic vocals from Zoey Gley and Lisa Fletcher, along with Brian Kock's saxophone and flute. "Mata" features memorable words by Rudyard Kipling and Joyce Kilmer.

""Se deus quiser" ably substitutes Luca Calabrese's pocket trumpet for vocalists, but Pat Mastelotto's recitation of Lord Byron's poetry brings it home: "I love not man the less, but nature more." The album closes with "O fim do mundo," an extended Markus Reuter soundscape. Although it was recorded prior to this project, it found its home here, combined with Brazilian field recordings and metallic percussion from Pupato. A fitting atmospheric conclusion to an album rich in atmosphere, as well as the showcase that Reuter fans were waiting for. The entire project is remarkable in every way: a magical musical collaboration in service of a significant environmental cause.