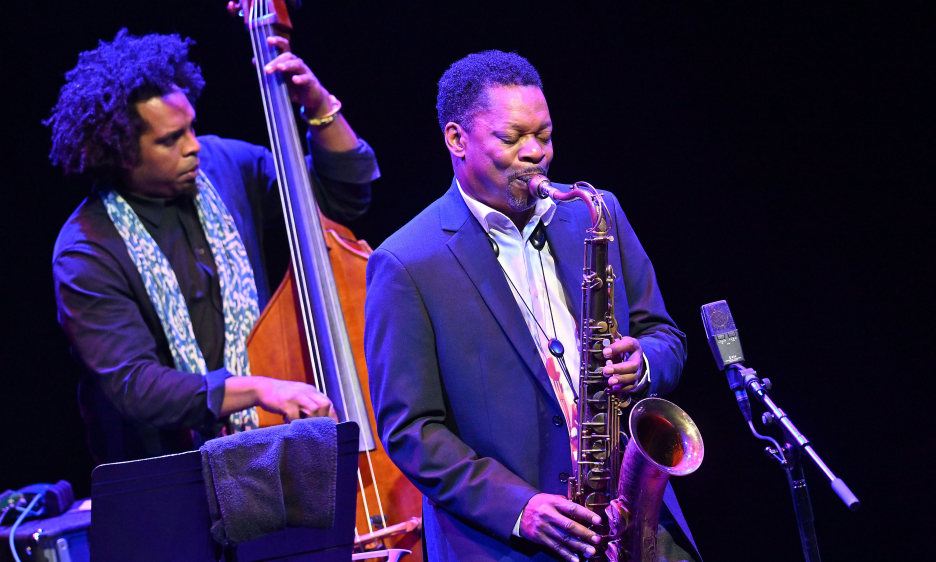 I’ve been trying to avoid this all my life, but it had to happen one day [audience laughter]. Seriously, this music would have inspired me even had I been born into a different family in a different part of the world. It is an honour to play it for you tonight.
—Ravi Coltrane

London's go-to concert venue for high-grade international jazz in friendly and comfortable surroundings, the Barbican Centre is no stranger to celebrations of the music of Alice Coltrane and John Coltrane. In autumn 2017, A Concert For Alice And John presented bands led by Pharoah Sanders, British tenor saxophonist Denys Baptiste and Ukrainian-born, London-based harpist Alina Bzhezhinska. Any performance by Sanders was to be treasured, but it is Baptiste's that sticks in the mind most vividly. Fronting a quartet, his set was based on his album The Late Trane (Edition, 2017), on which he offers lyrical, but still muscular, interpretations of John Coltrane's sometimes abrasive late-period work.

Alice and John's son Ravi Coltrane's performance at the Barbican was equally singular. It was the British leg of his autumn 2022 Cosmic Music tour, in which he revisits pieces composed by his parents and puts adventurous new spins on them. In close on twenty-five years of own-name recording, Coltrane has only rarely touched on those two bodies of work, and when he has done so his approach has been light years away from mere revivalism. Coltrane's style actually owes far more to the influence of Steve Coleman, in whose band he played between 1994 and 2004, than it does to either of his parents.

Addressing the audience about halfway through tonight's concert, Coltrane said: "I've been trying to avoid this all my life, but it had to happen one day [audience laughter]. Seriously, this music would have inspired me even had I been born into a different family in a different part of the world. It is honour to play it for you tonight."

On tenor and sopranino saxophones, Coltrane led a high-octane quartet completed by Gadi Lehavi on piano and Rhodes, Rashaan Carter on acoustic bass and bass guitar, and Elé Howell on drums. The group performed eight pieces (including two encores) over a two-hour programme with no interval. In running order, we heard Alice's "Rama Rama," John's "Giant Steps," "After The Rain," "Slow Blues" and "Expression," Alice's "Los Caballos" and "Journey Into Satchidananda," and John's "Alabama."

The band is dynamite. Coltrane mainly played tenor, on which his sound is massive, but softer edged and less biting than that of his father. Carter played bass guitar on only "Los Caballos." His forceful, extended intros to "Rama Rama" and a spectacularly funky "Journey Into Satchidananda" were perfect little masterpieces. Lehavi, the kind of intense, high-energy keyboardist who gives chromaticism a good name, moved to and fro between piano and Rhodes. His solo on a speed-of-light "Giant Steps" was breathtaking, as was the one by Howell, the youngest member of the band and a big loud drummer in the best way possible. More than either of his colleagues, Howell acted as a spur to Ravi, rather as Elvin Jones did for John. His solo style, however, which favours iterated and elaborated-upon visceral two and four-bar motifs, is more reminiscent of London's Moses Boyd than it is of Jones. Two hours flew by.

This is pure speculation but... Is Ravi Coltrane about to sign with Impulse!, his father's final record label? In an interview to be published on All About Jazz on October 17, 2022, new Impulse! president Jamie Krents says: "I'm probably just weeks away from being able to talk about [a new signing]. But because the contract is not quite signed yet, I can't." He also says: "When you see that orange and black and the logo you know you're going to get music from an artist who really has their own point of view." Coltrane certainly fits that description. If he does sign to Impulse!, you read it here first. If he does not, put the idea down to fevered imagination.

Anyway, the Cosmic Music tour continues with one-nighters in Portugal, Germany, Belgium, Hungary and the University of Pennsylvania, before a week at the Village Vanguard, from Tuesday 25 to Saturday 30 October. If the quartet performs with the same passion as they did at the Barbican, these will be nights to remember, too.