Quest: Quest: Searching for the New Sound of Be-Bop

By John Kelman
September 7, 2010
Sign in to view read count 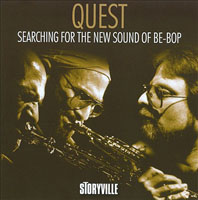 Searching for the New Sound of Be-Bop

There are groups that become legends in their own time and others that only gain momentum after that time has come and gone. Quest was by no means unsuccessful during its ten-year run beginning with its self-titled, Japan-only, 1981 debut, but the quartet's reputation has grown considerably in the two decades since its swan song, Of One Mind (CMP, 1990). As key as each member of the quartet was, it remains the collective language of Quest's two principal writers (saxophonist Dave Liebman and pianist Richie Beirach) that defined Quest's sound—an acoustic evolution over their 1970s group Lookout Farm, which, unlike its higher volume, higher octane counterparts, remained an unapologetic jazz band, albeit one which explored a post-saxophonist John Coltrane landscape through a prism personally crafted of funk, Indian and 20th century classical musics.

Throughout the collective two-decade lifespan of Lookout Farm and Quest, Liebman and Beirach also made some fine duo discs, including the sadly in need of reissue gem, Forgotten Fantasies (A&M/Horizon, 1975). Recent years have seen Quest reform for a European tour, documented on the stellar Redemption—Quest Live in Europe (HATology, 2007), while the three-disc Mosaic Select 12: David Liebman & Richie Beirach (Mosaic, 2004) collected live recordings from both groups and the Liebman/Beirach duo at San Francisco's Keystone Korner, and Mosaic Select 32: Pendulum Live at the Village Vanguard (Mosaic, 2008) provided a more complete glimpse into an incendiary, pre-Quest quintet that augured, in many ways, what was to come just a few short years later.

But the original Quest discs have remained largely hard to come by, commanding outrageous prices on eBay and through Amazon's Marketplace resellers, making Storyville's Searching for the New Sound of Be-Bop a thoroughly welcome event that caps a year of almost unprecedented activity from a saxophonist who, not including this double-disc set, is fast approaching an aggregate of ten new and/or reissued releases. Searching brings Quest's second and third albums back into print—Quest II (Storyville, 1986) and Midpoint (Storyville, 1987)—fleshing each album out by spreading the Liebman/Beirach duo set, Double Edge (Storyville, 1985), across the two discs, making this a generous, 144-minute collection of music that not only bears revisiting a quarter century later for reasons of pure, unadulterated enjoyment, but for the bright light it shines on an unmistakable language honed, in collaboration with bassist Ron McClure and drummer Billy Hart, by Liebman and Beirach in one of the longest lasting musical relationships in modern jazz.

While Quest II came five years after Quest's Breaktime label debut, it was the first to feature what would become the quartet's stable and enduring line-up. From the opening notes of Beirach's brooding "Gargoyles," it's clear that this is a language as informed by 20th century classicism as it is an evolutionary expansion of the post-bop aesthetic, particularly refreshing given its emergence at a time when young lions were bringing a woeful new conservatism back to jazz. With time a flexible, pliant thing, Liebman's soprano soars over Beirach's impressionistic voicings, McClure's deep-toned mix of harmonic anchor and contrapuntal foil, and Hart's textural brush work. A rapidly accelerating melody dissolves into freedom that continues to expand, seemingly filling a vacuum, only to suddenly resolve into a slow but relentlessly propulsive pedal point that creates a context for the first of many stunning solos from Liebman. At this time, Liebman had retired his tenor, opting to build on a more personal soprano sound that continues to be both inimitable and influential to this day, but it's the convergence of the four participants in Quest that made it possible for Liebman to reach the heights he does here and throughout the two Quest sets collected on Searching. 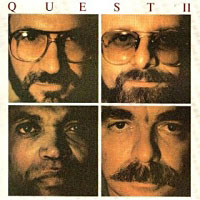 But lest anyone think this is going to be all implication and European classicism, Beirach's "Pendulum"—a tune the pianist has revisited time and again, as far back as his own desperately in need of reissue trio date Elm (ECM, 1979), and as recently as his just-released big band collaboration with Liebman, Quest for Freedom (Sunnyside, 2010)—comes charging out of the gate, another exercise in advanced modality but in a far more sophisticated manner than that explored by the duo's early model, Coltrane and pianist McCoy Tyner. With Hart and McClure swinging hard and heavy—but with a kind of loose freedom that makes the whole thing feel like a house of cards that, strong as it is, could dissolve at any second—Liebman and Beirach orbit in and around each other, alternatively taking the front position and driving each other to climax after climax of ascendant power. There are few groups in the past quarter century who have the ability to sound this reverent to the tradition while, at the same time, never feeling stuck in it. Unlike the neocon music that was everywhere at the time, "polite" was a word that could never be used to describe Quest.

Central to Quest's visceral innovation was Beirach's blend of Tyner-esque modality and an upbringing that imbued his playing and writing with the advanced language of late-19th and early 20th century classical composition. Equally fundamental, and in some ways antithetical to Beirach's sophisticated harmonic ambiguity—a language that resulted in Keystone Korner's Todd Barkan dubbing the pianist "The Code"—has been Liebman's oft-cited expressionism. Comparisons are often made between Liebman and an undeniable primary influence, Coltrane, but while Liebman has always been capable of the same stunning virtuosity that led to Coltrane's legendary "sheets of sound"—wave after relentless wave of rising and cascading notes—the younger saxophonist has never been anything but his own man, with a soprano tone both warmer and more eminently visceral than Coltrane's nasally, Indo-centric tone, and a solo approach far more imbued with a narrative-like sense of construction and a willingness to let space be, at times, an equal partner. It's hard to imagine Coltrane approaching a song like Liebman's dark ballad, "Carissima," with the same spare economy, or even the younger saxophonist's almost impossibly up-tempo "Third Visit," where an incendiary but still somehow measured duo between Hart and Liebman shows just how distanced the two are from the unbridled exchanges between Coltrane and drummer Elvin Jones. 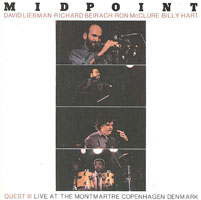 While Quest II focused exclusively on Beirach and Liebman's writing, Midpoint also includes one contribution each from McClure and Hart, as if to clarify the group's egalitarian nature—as if one listen isn't enough to dispel any thoughts to the contrary. If Liebman and Beirach defined the linguistic structure of the group through their predominance on the compositional front, McClure's title track, with a context-setting opening solo from Beirach, makes clear that he speaks the same language, on a moody ballad with the same kind of dark ambiguity, and a bass solo that, much as his performance across this set, raises many questions as to why he's a lesser-known entity than his band mates. Hart may be the most-recorded of Quest's players, but his recordings as a leader are few and far between, with his most recent, Quartet (HighNote, 2006), now more than four years old. But what he lacks in compositional prolificacy he makes up for in depth, his set closing "Redemption" a turbulent maelstrom of activity, with a sketch of a head that, nevertheless, is more than enough to encourage this empathic quartet to launch itself into the stratosphere.

The hour-long set also revisits another Liebman favorite, "Pablo's Story," first heard on Lookout Farm's 1974 self-titled ECM debut, but here delivered more directly than Lookout Farm's percussion-heavy version while explored at even greater length. Paradoxically, the only track from Quest II is that album's shortest track, Liebman's "The Hollow Men," here delivered in an even shorter version, not even reaching the four-minute mark—more a tone poem that acts as a palate cleanser between the driving "Pablo's Story" and free-wheeling "Redemption." 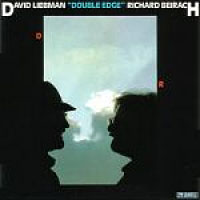 The inclusion of Double Edge might seem odd—a duo set, rather than a Quest disc, and with a set of nothing but covers and not a single original to be found—but its seven tracks set the stage for the piercing originality of Quest's in-house writing. The title of this collection says it all: Searching for the New Sound of Be-Bop, and while Liebman and Beirach tackle a seemingly conservative set of standards ranging from "On Green Dolphin Street" and Sonny Rollins' enduring "Oleo" to Thelonious Monk's perhaps overused but, in these hands, never abused "'Round Midnight" and Leonard Bernstein's "Some Other Time," it's the time, indeed, when this set was first released that makes it so notable. In 1985, the young lions were returning to greater convention, and the difference between their well-played but largely backward-looking view of the tradition and this duo's forward-reaching exploration of the infinite possibilities of even the most overplayed music can be brought into even sharper focus now, a quarter century later. There's nothing tired about the way this duo rips through a miniature version of "Oleo," or its more luxurious walk through "'Round Midnight," and the disparity between Liebman's spiritual mentor and his own playing couldn't be more obvious in the dark-hued version of Coltrane's "Naima," or a more fervent but harmonically denser version of his equally enduring "India."

If the two Quest sets are the big draws here, Double Edge proves that Liebman and Beirach's language could be placed into any context. At the time, the songs on Double Edge would have been more familiar, though 25 years later, the fans who have been eagerly anticipating this reissue may well be equally intimate with Liebman and Beirach's own music. Whether it's interpreting standards or exploring the true future of be-bop with music that not only sounded fresh and modern then, it remains that way today, Searching for the New Sound of Be-Bop is an apt title, but only to a certain point. A few minutes of this outstanding and welcome reissue are all that's needed to hear that the members of Quest had not only found the sound they were searching for, but were continuing to fight the good fight of pushing it ever-forward...something that they all continue doing to this day, both inside and outside the purview of this fine and now clearly groundbreaking quartet.